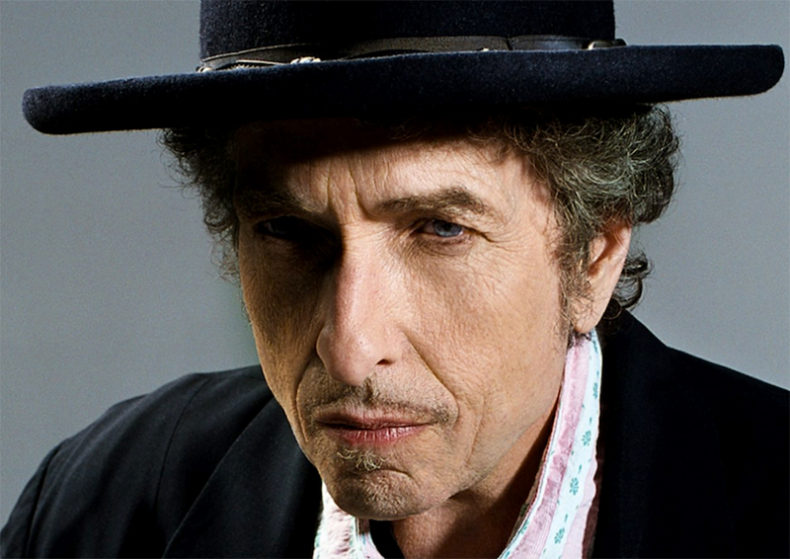 Bob Dylan And His Band

While on an extensive tour across North America, the iconic Bob Dylan has decided to include a short tour of Ontario with six shows across the province.  Catching him at Oshawa’s Tribute Communities Centre- right in the middle of his Ontario trek, following performances in Kingston, Ottawa, and Barrie, with Toronto and London to come- was just as one could expect: a special affair which felt as if it would not be replicated again; purely out of Dylan’s creative, poetic, and elusive nature.

Taking the stage at just past 8, the recent Nobel Prize recipient had complete control over the attention of the audience for the next two hours or so with a no frills and all thrills set. The stage was set to look like a living room studio. Illuminated by a handful of rustic spotlights and lamps, the carpeted stage was surrounded by red velvet curtains, giving the illusion that this was not actually a stage, but an enclosed space. The room was filled with vintage guitars and amps, as well as a grand piano, which Dylan would reside at for most of the night. To give the room a slightly lived in appearance, Dylan’s monitor had a white marble bust of a woman’s head and his Oscar award for his 2001 song, “Things Have Changed” from the film, Wonder Boys. The stage set up created an atmosphere that I would argue was a crucial component in what made the night feel so exciting. At the very least, it was refreshing to see the stadium transformed into what felt like an intimate and private viewing from within one’s living room studio.

It is known that Dylan’s live show often takes the form of his recent recorded work. His last three albums – Shadows In The Night (2015), Fallen Angels (2016), and his most recent, Triplicate (March, 2017) – have consisted solely of covers of classic American pop songs which have grown to be considered as standards of American music. In tune to this, his band consisted of a drummer, a bassist- who would regularly switch between an electric and an upright bass- two guitarists, and one slide guitarist who also played the violin or an additional guitar if needed. The band played softly with a level of confidence and ingenuity that stemmed from playing jazz and the blues. When Dylan was busy laying out some impressive ragtime inspired piano lines, he stood center stage, almost among the band- rather than far ahead of them like many band leaders – and crooned gently into a microphone. Their set opened with “Things Have Changed”, and while his set consisted primarily of originals, including “Make You Feel My Love”, “Desolation Row”, and “Summer Days”, all of them were performed in a manner which was in line with his previous three records, giving them a tone which made them feel like unearthed classics from generations past. Of the covers, Dylan performed Cy Coleman’s “Why Try To Change Me Now”, Harold Arlen’s “Stormy Weather”, Tony Bennett’s “Once Upon A Time”, and Johnny Mercer’s “That Old Black Magic”.  While all were performed wonderfully, the two which stood out the most were Frank Sinatra’s “Melancholy Mood” and one of the most beautiful and heartfelt renditions of “Autumn Leaves” I have ever heard.

Throughout history, the world has heard Bob Dylan, the folk musician, and Bob Dylan the bluesman, but at the age of 76, Dylan proves to have moved gracefully into a position as a classic American icon himself; a true curator of pop music’s earliest roots. Whether he was playing deep cuts from his entire career, including classics of the likes of “Blowin’ In The Wind” and “Ballad Of A Thin Man”, or tracks from his last original album, 2012’s Tempest– like “Pay In Blood” and “Soon After Midnight”- Dylan has entered a chapter of his life which is just as exciting and influential as his entire career as he pursues his latest creative venture, rather than run himself to the ground with nostalgia.

A passion for music has always been a part of Gerrod’s life. As a young boy, he was raised on a steady diet of the music from The Chili Peppers, Aerosmith, The Stones, Prince, and others from his mum. Raised in the GTA, Gerrod continued to foster his love for music by attending a wide range of concerts and learning the drums. His unapologetic passion for music has no bounds and has spread to a wide variety of styles, whether it be the 90’s rock that sound tracked his teenage years, the jazz he studied in university, or his newfound love for hip-hop. He recently received his bachelors in music and education from York University and is passionate about writing and reviewing good (and less than good) music. Gerrod is also the drummer and songwriter for a Toronto based rock & roll band, One In The Chamber.
RELATED ARTICLES
bob dylanlive reviewoshawa
8.0