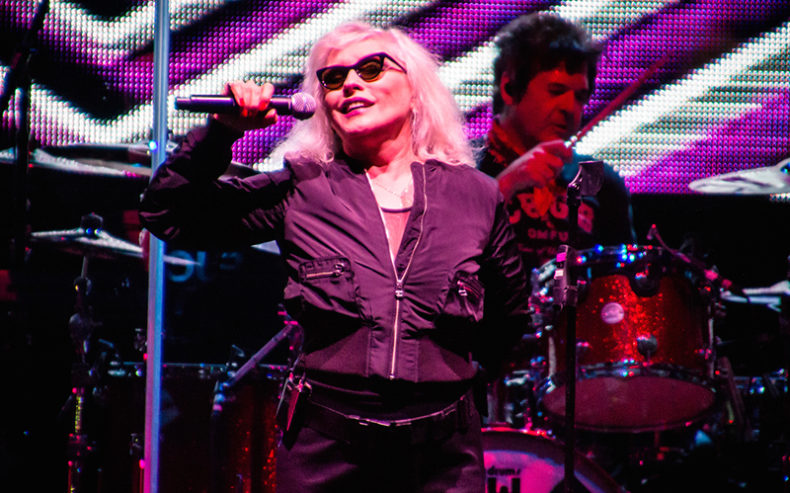 With careers spanning nearly 50 years, the musical legends that form Blondie need no introduction. What many might not know about the group is that they formed as part of the NYC punk movement back in the 1970. It was only after changing their musical direction that they achieved massive commercial success that we have all come to know. Blondie has endured through a very changing and evolving musical industry until deciding to take a break in 1982 and later making a comeback in 1997. Jump forward a decade and the band has since released their eleventh studio album  Pollinator in 2017.

For their tour of the same name, the band still has three original members still in place including Debbie Harry on vocals, Chris Stein on guitar and legendary drummer Clem Burke. The band lineup has been supplemented in recent years with the addition of Matthew Jeremy Katz -Bohen on keyboards (since 2008), Leigh Foxx (since 1997) and Tommy Kessler on guitar from 2010.

Opening with a buzzing effect magnified over the speakers before the three video screens at the back of the stage burst into life with colours and images to accompany the classic “One Way or Another.” Harry as the focal as well as the vocal point took to the stage resplendent in a Bee face mask (keeping in with the albums Pollinator them). At 72, Harry’s vocals and presence exude a warmth and confidence just as they did years ago.

Blondie’s set was mostly focused on their hit singles which ensured a feel good factor amongst the varied aged audience that lasted until the last bars of the very last song. The show felt like a veritable greatest hits jukebox. We’re talking hits like “Rapture”, “Maria”, and “Call me”. The real surprise though came with their cover of “Fight For Your Right” by the Beastie Boys, which raised some surprised expressions amongst the audience. As expected, they then played a few numbers from their latest album, including “Fun”, “Gravity” and “Fragments”. It was the later track that sounded the freshest to my ears on a very first listen.

The band closed with their most recognizable track, “Heart of Glass”, a true classic for any Blondie fan. Finally, to keep the show going, encores then featured an obscure “Fade Away and Radiate”(from the 1978 Parallel Lines album) an unusual deep cut selection from  Blondie. Two final numbers were more easily recognizable in “Union City Blue” and “Dreaming” from the 79 classic Eat to the Beat album.

Throughout their performance, the band had their respective introductions and solo spots-particularly impressive was the heavy rock soloing of guitarist Tommy Kessler who would definitely sound at home in a band of that particular musical genre. Kudos also go out to drummer Clem Burke whose raw power belied his physical age.

Overall, the introduction of fresh youthful band members appears to have energized the band. In an age where bands and band members are retiring /splitting up, Blondie remains a charismatic live force. The quality of the band’s songwriting as evidenced on Pollinator also proves that there is still a bright burning flame of creativity shining brightly within Blondie. My debut viewing of this classic band far exceeded my hopes and expectations.

I'm a 40 + music fan. Fond mostly of Rock and Metal my staple-musical food delights. Originally from Northern Ireland I am now based in the UK-Manchester. I have a hectic musical existence with regular shows and interviews. Been writing freelance for five years now with several international websites. Passionate about what I do I have been fortunate already to interview many of my all time musical heroes. My music passion was first created by seeing Status Quo at the tender age of 15. While I still am passionate about my Rock and Metal I have found that with age my taste has diversified so that now I am actually dipping into different musical genres and styles for the first time.
RELATED ARTICLES
blondiebmgchris stein