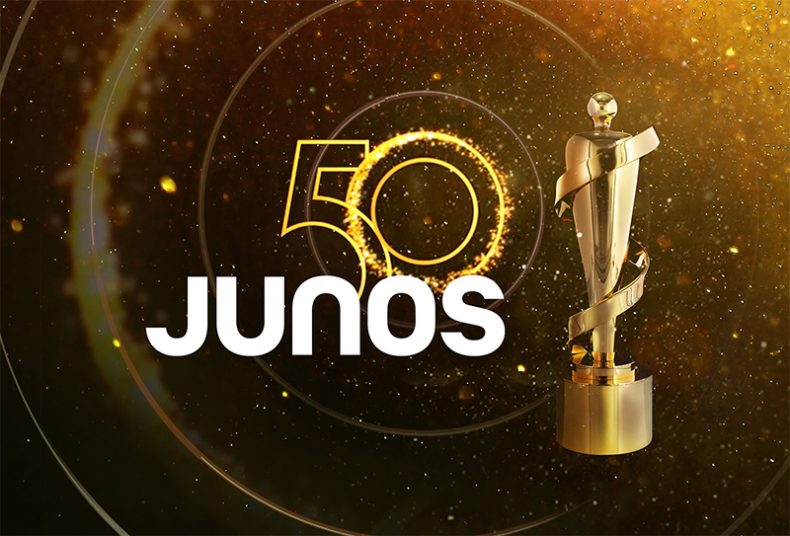 “Music is magic, music is unbelievably special, and important to human life. It always has been, and it always will be”, exclaimed Jann Arden on accepting her nomination tonight at the JUNO Awards to the Canadian Music Hall Of Fame. Clearly a sentiment shared with the Canadian Academy Of Recording Arts And Sciences, as they met for the second evening this weekend to recognize and award excellence in the Canadian Music Industry. The 50th Juno Awards celebration, broadcast live on CBC, was held at Rebel Night Club in Toronto, featuring performances from a number of music venues across Canada.

As always, awards are given in a wide variety of categories, their presentations interspersed amongst a variety of representational performances by many nominees. Cutting across genres, these performances will never please everyone, but some will be impressed by what this reviewer considers tepid contributions to the show, including the one by Justin Bieber, his first at the Junos since 2010, as well as the duet by up-and-comers Ali Gatie and Tate McRae, the latter pouring a little more soul into what could be considered at best a shallow serving of pop. A little livelier was the William Prince and Serena Ryder collaboration, and the Canadian Hip Hop Tribute featuring Kardinal Offishal and Maestro Fresh Wes, commemorating the 30th anniversary of the first JUNO award in the Rap category was a definite highlight.  Interspersed amongst the presenters and the introducers and the hosts and the winners, a handful of notable Canadian Music Royalty were asked to share iconic “Juno Moments”, an interesting backstage view of moments past, including Corey Hart meeting the love of his life, chanteuse québecoise Julie Masse, for the first time onstage at the 1993 Junos as they presented together,  Alanis Morrissette tackling censorship in her ‘nude’ costume, and K.D. Lang’s award acceptance in her kitschy wedding dress.

There were two performances that stood out at this year’s award presentation for me, both for their similarities, their contrasts, and for the recipients’ impact on Canadian music.

Jann Arden has entrenched herself firmly and deeply into the collective Canadian Psyche. Her humour, her heart, and her love for her family have been front and centre, each step of the way, over the span of her career, embodying three of the biggest virtues we hold dear as Canadians—mixing humour with her love of family, all the while maintaining humility. In many ways, we relate to her — she is us. On the other hand, her vocals exude wild, uninhibited passion and emotion, which can be unleashed then tamed instantly. Her songs are powerful yet simple, while being completely relatable, the melodies will pierce your heart while you find yourself singing along, unabashedly. Even Anne Murray, the little Canadian snowbird herself, was the perfect choice to induct her into the Hall Of Fame. Her amusing anecdote about inviting Arden to a round of golf and having to go to the pro shop to clothe her so she could be allowed on the course just further reminded us of her down-to-earthiness.

Tonight’s performance of “Good Mother” was one for the books. Just the mention of the words “Good Mother” from Arden’s lips stirs up a whirlwind of emotion, as the loss of her mother to Alzheimer’s in late 2018 is a familiar tragedy felt by too many Canadian families. This was a stellar performance highlighting a stellar career.

It is, however, the final chapter of the evening that will have Canadians talking for years to come. Not sure if by fate, irony, or divine intervention, this year’s Juno show takes place a mere 10 days—10 days – after the discovery of the remains of 215 indigenous children buried on the grounds of a residential school in Kamloops, B.C. The first discovery of its kind, it will no doubt be the last. The Tragically Hip reunited tonight to receive The Humanitarian Award presented to them by Music Canada for their humanitarian work on Canada’s reconciliation with its Indigenous peoples, at a moment in time where the nation has uncovered and removed a massive scab on the nation.

Introduced by the surviving members of Rush, Alex Lifeson and Geddy Lee, even the location of the performance was iconic, filmed at Toronto’s Massey Hall, a National Historic Site of Canada built in 1894 but closed since 2019 to undergo extensive renovations. This was the band’s first televised performance since Gord Downie’s passing in 2017. Wicapi Omani, or “He Who Walks Among The Stars”, a Lakota name bestowed upon Gord Downie shortly before his death, was present in the house tonight. There is no doubt about that.

The Hip was led on vocals by Leslie Feist, and by all accounts, Gord would have approved. She can be a powerhouse of a vocalist, yet her performance tonight was both subdued and restrained. You can be sure, had Downie been alive and on stage, he would not have shown the same restraint, but perhaps for that very reason, it was more fitting that tonight she was. The Hip have always been a well-oiled musical machine, more focus than flash, leaving the latter to Downie. “It’s A Good Life If You Don’t Weaken” was written in 2002, long before the diagnosis, long before Secret Path, long before Gord’s efforts to lead us into reconciliation with our Indigenous peoples, but the words couldn’t have been more fitting. “For a good life/We just might have to weaken/And find somewhere to go”. Tonight’s performance was nothing short of superb. One thing is certain – the band still has it. Beautiful, aching, but extremely difficulty to watch, with Feist the perfect conduit for Gord.

A few short weeks ago, Jann Arden would have reminded us all of the values we as “Canadians” hold dear. In contrast, however, the timing of the return of The Tragically Hip, so soon after the discovery of the missing children — and there will be more — has led Canadians to question who we really are. One thing is certain, music has the power to heal, and will – as always – get us through this. As the line in “It’s A Good Life If You Don’t Break” says, “Let’s get friendship right.”

At this difficult crossroad, hats go off to the Juno’s for putting together such a magnificent evening and bringing us together as a nation. Let’s let music keep us together and help us heal.

Check here (https://junoawards.ca/awards/winners-nominees) for a complete list of this year’s winners.

Trish Melanson lives in the Toronto area with her three boys, Nicholas, Justin, and Eric, her dog Jakkson, and her cats Max and Jagger. She is the former host and producer of Canadian Kickass, a weekly two hour radio show on New Jersey's Chestnut Radio, showcasing Canadian Music. She is also a former Web Content Manager of Indie Soundscapes, an online showcase for Independent Music Artists Worldwide, and was a regular music contributor to The Stroumboulopouli. She is a fervent supporter of the Toronto live music scene. In a past life she was a teacher and Vice Principal in Durham Region. She has many more new and exciting projects waiting in the wings. ;)
RELATED ARTICLES
feistgord downiegordon lightfoot