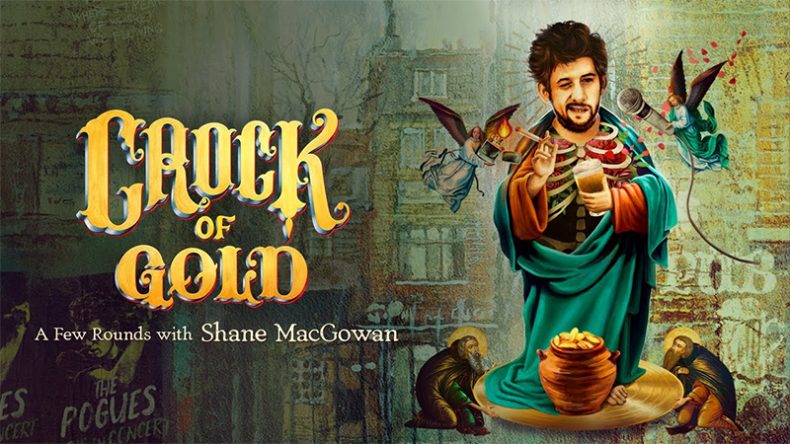 CROCK OF GOLD: A FEW ROUNDS WITH SHANE MACGOWAN

Over the past decade or so, legendary music video and rock documentary director, Julian Temple, has brought us a fantastic film on one of Ireland’s most prolific singer-songwriters, Shane MacGowan.

Crock of Gold opens with a cartoon of Shane MacGowan as a child, who narrates and claims to be the saviour of Irish music. While this may be an overtly bold statement, what follows is a visual essay from Temple backing up these claims.

While this is not the first documentary on the Celtic punk, it is by far the most thorough and entertaining. Compiling vintage and contemporary interviews of the singer-songwriter, the film creates a feeling of wholeness. Though MacGowan is interviewed by friends like Gerry Adams, Bobby Gillespie, Johnny Depp, as well as his wife, Victoria May Clarke, Temple seems to be able to get a little more out his subject than the usual gibberish and hiss-like laughter.

The film focuses much more on MacGowan’s early life. He grew up in a small blue-collar village, and lived under the same roof as his aunts and uncles. Their house had no working electricity and the family would literally “piss out the front door” and would defecate in the field because they did not have a toilet.

Of course, this is a film about MacGowan, so alcohol is one of the first topics to be explored. He mentions that his aunt would give him cigarettes and booze while preaching the bible to him at age four. Shockingly, he also reveals that up until the age of 11 he considered becoming a priest.

Alcohol was so liberally used in his household that he was supplied two bottles of Guinness each night as a child. His parents felt that early exposure would help prevent future abuse and binge drinking. Clearly the joke was on them.

The snaggle-toothed rocker tells Johnny Depp the story of his first time getting drunk, which was at the behest of a small bottle of whiskey that he drank in the middle of the day. As Depp offers to pour him a second glass of wine, he jokingly resists and says he hardly touches the stuff anymore. They then break into laughter.

Not surprisingly, the main feature in Crock of Gold is his time spent with the Pogues and the importance this had on making Celtic music fresh again. Combining the English punk sound with the acoustic instruments from his native Ireland, the Pogues really did create a fresh sound that no other artist has quite managed to capture.

The film glosses over how he has spent the 30-plus years since he left the Pogues. Sadly, however, from looking at our subject’s current state, it is quite plain to see. At 62, the wheelchair-confined singer makes Keith Richards look like a GQ model.

Crock of Gold does conclude on a few positive notes. The first is footage from his 60th birthday where the singer is honored by contemporaries like Bono and Nick Cave. But most importantly, and shockingly, the final scene is a rare tender moment that MacGowan shares with his supportive wife.