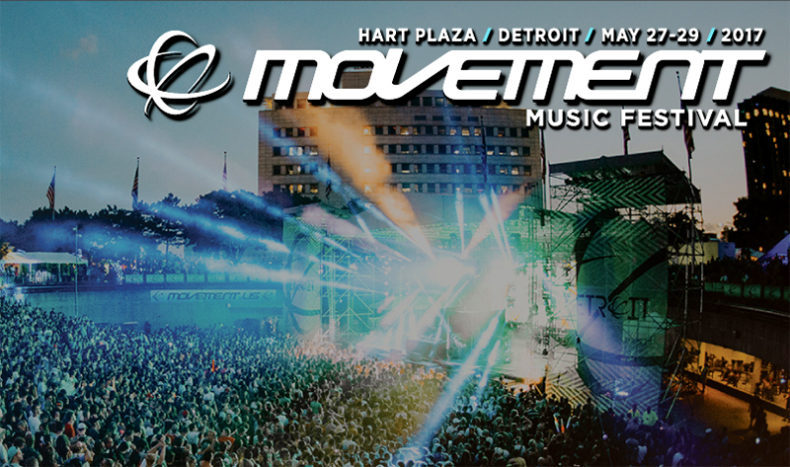 Boom-Boom-Boom-Boom. A cacophony of thunderous techno and hip hop ricochets off the concrete structures throughout Hart Plaza. People of all ages, dressed as rockers, candy ravers, a gorilla, or normal looking peeps wearing Detroit Hustles Harder t-shirts stream past me with Coney dogs, pretzels and king cans. I’m standing in the center of the plaza, flanked by the Detroit-Windsor riverside pyramid stage, food trucks, a stone arc, and a hanging black fist at the gate. My arm is misted by water from the naval-like, space age Horace E. Dodge and Son Memorial Fountain, designed by Isamu Noguchi and Walter Budd in 1978 – just a few years shy of Cybotron’sfirst techno single “Alleys of Your Mind” released in 1981 (Deep Space label). This classic Detroit techno track would go on to sell 15,000 copies and pave the way for the gold records of Juan Atkins’ releases, and others from the Underground Resistance, the godfathers of Detroit techno.

Hart Plaza is an appropriate location for Movement , the annual homage to techno held every Memorial Day weekend. Techno draws from jazz, Motown, the novel visions of George Clinton’s Funkadelic, as well as Star Trek (a futuristic community where everyone can get along), according Thomas Teknobrat, my Canadian tour guide to the Exhibit 3000 at the Underground Resistance – a.k.a. the secret Detroit Techno Museum (3000 East Grand Blvd., just down the street from the Motown Museum / Hitsville House).  In this way, Noguchi and Budd’s large circular metal sculpture reflects the intergalactic innovation and Afrofuturist influence on Detroit techno, a genre of electronic music rooted in urban struggle, decay and marginalization.

Since taking over from DEMF (Detroit Electronic Music Festival) and Fuse in 2006, Movement has grown exponentially and garnered a lot of new, international fans, be they techno aficionados or voyeurs to the largest and best techno music festival in the world. The music and sonic exploration at Movement differs from other North American electronic music festivals. Instead of catering to an overall experience with music being one of many facets, Movement delivers a consistently music-focused festival. Here, DJ’s and live talent deliver harder sets but without pretention. I cannot explain why. Perhaps it’s the soul of Detroit, a city marked by a rich musical history that birthed techno by a group of masked DJs. Or, simply, because Detroit hustles harder.

While costs sky-rocketed and this year and it felt as though someone handed out flyers for Movement at Ultra, the “bleaching” and commodification of techno has not overrun Detroit. Its rawness and the cultural legacy of techno as a protest music rooted in struggle continue to flourish in the hard walls of Motor City. Plus, the genuine hard-working citizens who open their door to a growing mass of music lovers and curious newcomers via one of the best electronic music festivals in the world are an inspiration. It’s real here. And while I cannot teleport back to DEMF, I listened to Moodyman after viewing his iconic, architectural tribute to Prince, a red-bricked house with purple curtains flapping in the breeze. I was zapped into the future by Carl Craig’s closing set that opened up with futuristic live synths played by Amp Fiddler and Francesco Tristano before zooming into techno that fused into some more classic, softer sounds by close (Craig launched Detroit Love at ADE in 2014 with a closing live set featuring Detroit natives, Recloose, Moodyman and Mad Mike Banks).  Craig followed Stacey Pullen, who delivered another consistent killer set at the Detroit Love stage.

Day one also featured Ritchie Hawtin’s live CLOSE set that closed main stage on Saturday night, after a rare set by the Belleville Three and a cosmological set byNicole Moudaber. Saturday night’s after parties were many with Tresor, Moodyman and Soul Clap’s annual TV Lounge after party (with a surprise extended set by Louie Vega – essentially church) and Josh Wink being highlights. Gene Ferris and Seth Troxler were heralded as Gods by my companion for their after party and main stage sets. Dirty Bird fans were regaled by the historic Fillmore Sunday night party yet again. And Old Miami had a three-hour wait by 11 am with Troxler coming out to greet us with who was on the line up. As Black Madonna closed his set with Madonna’s “Borderline,” Doc Martin took over before Canada’s John Acquaviva made a surprise pop-up set, venturing far from his usual fare before Kevin Saunderson closed out another salute to Memorial Day from Detroit’s favourite veteran’s club.  UK’s DJ Harvey opened up Movement’s final day at Hart Plaza with a mellow disco set that featured favourites like “Stomp!” under welcomed blue skies. Maya, J Phlip and strong acts played a pop up tent in the VIP area (this was seriously the best music at the festival at one point).

But the highlights for me were not at Hart Plaza, where space age sculptures and techno pound into you from all corners of its urban concrete abyss. It was being back in Detroit – a city that despite so much hardship continues to reinvent itself and stay positive. Sure, Movement lost Soul Skate this year, Moodyman’s skate party at a roller rink in 8 Mile this year, but the city’s sprawling art installations, graffiti alleys, and dilapidated art deco historic buildings still deliver as only Motor City can.

Crossing the Windsor-Detroit border is like waking from a vivid dream that I will scramble to recall upon returning, delirious, back to Toronto after a sleep-deprived, musically intense weekend.  “How was Detroit?” a friend asks. “Amazing,” I respond, fuzzy on the details, save the steady boom-boom-boom of the bass bins.

Talia Wooldridge is an avid music lover, composer and ethnomusicologist who contributes artist interviews, live concerts, festivals and album reviews for Spill Magazine. She has written extensively on the intersection of music, personal identity and cultural symbolism with an early focus on Latin American Hip Hop and female Cuban rappers. In her spare time, Talia writes, composes music and manages Music Can Heal, a non-profit that brings live, award-winning musicians to inspire healing in hospitals, hospices and communities in need. Her next project is an interactive music-travelogue exploring music cultures and music travel around the globe. Follow her here: www.taliawooldridge.com + www.movetoyourownbeat.com.
RELATED ARTICLES
detroitfestivallive review