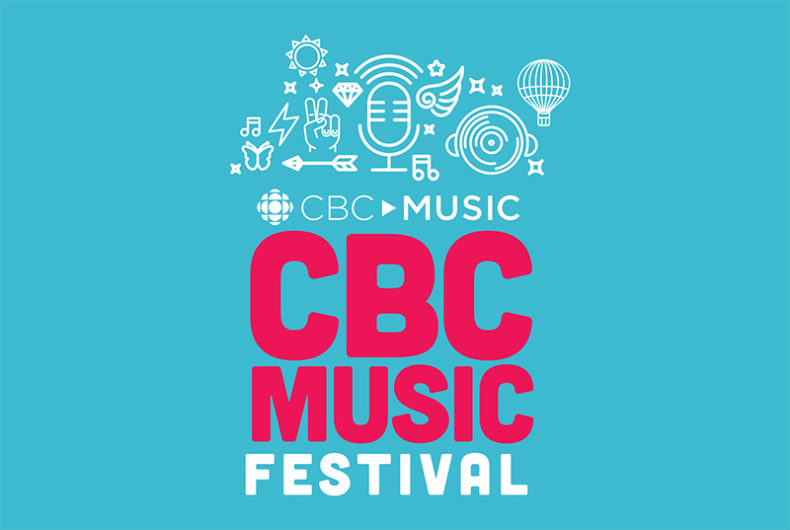 Going into the festival, I didn’t know what to expect, other than mediocre weather. Turns out, I was ready to discover new music and kickstart the festival season.

The 5th annual CBC Music Festival took over RBC Echo Beach in Toronto for the day with an all Canadian lineup of talent. Echo Beach is a great spot for a festival and families looking for fun day on a budget. Children under the age of 12 got in for free, and let me tell you, there were lots of them. There was a steady stream of children digging around in the sand and dancing around the beach. There was always a toddler running through the assortment of food trucks and small booths with activities for them.

Although the weather was cloudy, the festival started off on a high note. Just as I arrived, female rock band The Beaches had already taken the main stage. The band, who ironically had never performed on a beach before, feature a new wave sound reminiscent of British Rock, and was full of attitude and power. Decked out in a ’70s look, they took charge of the stage and sparked my interest. I’ve already added them to my Spotify playlist and have no regrets, these girls are the real deal.

After being wowed by the first performer, I had high hopes and was ready to get the party started. It seemed folk and country singer-songwriter William Prince had a different agenda though, and slowed things down. While he brought some heartfelt and genuine talent, it felt more like music that would help you rest after a long day and not keep you engaged during a festival. He was little too mellow to be on the main stage so early in the day.

French Canadian singer/songwriter Bobby Bazini got people back on their feet with a single from his 2016 album C’est La Vie. Bazini sounded almost better live than his record, which is hard to find especially with such a recognizably different voice. After hearing him, I wasn’t surprised when I found out that his debut album Where I Belong, was Canada’s best-selling album in 2014. While there wasn’t a lot of engagement with the crowd, Bazini’s set was a highlight of the day.

Toronto’s own Scott Helman was one of the most anticipated performances of the day, but arguably the most disappointing. The pop singer opened with “Kites”, one of the songs from his newly released album Hôtel de Ville. While the energy was there, Helman’s vocals were not. He did seem to warm up as the show progressed and his fans didn’t seem to notice, there was undoubtedly some technical issues or vocal strain on Helman’s side. The saving grace of the set was his performance of “Bungalow”, the song that most of the crowd was familiar with and a personal favourite of mine. 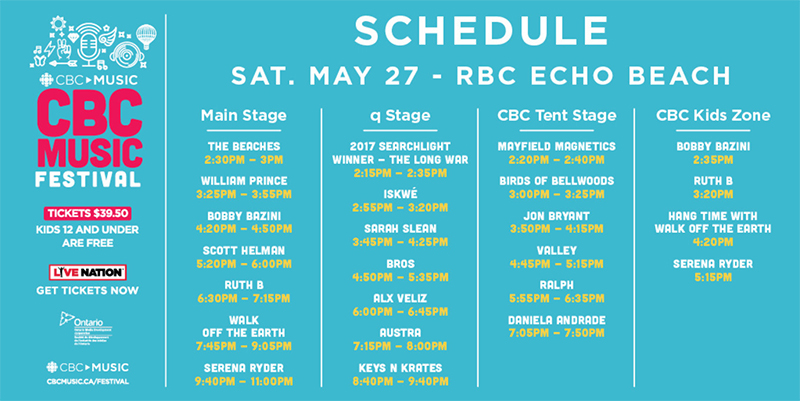 Ruth B, singer-songwriter from Edmonton, was another highly anticipated performer at the festival, and for it being the 21-year-old’s first ever festival performance, it was impressive. It’s even more impressive when you realize how new she is to the music scene. She started out posting short singing clips to the now retired app Vine in 2014 and her clips blew up and led to a record deal and the release of an EP in 2015. Her talent is so raw and soulful that her performance sounded almost identical to her record. While she seems a little awkward on stage, that could simply be the fact that she hasn’t performed at this level for very long. She covered Ed Sheeran’s wildly popular “Shape of You” and performed “Lost Boy”, the song that went triple platinum in Canada.

While there were many smaller acts on the Q stage, Austra was the most enticing. Front woman Katie Stelmanis’ bright orange hair and eccentric style of electronic music were a fun combination. Everything was great, but everyone must have been watching the clock because just before Walk Off the Earth, the crowd around Austra began to dwindle. While I do wish I could go back in time and stay to see what strange but pleasing noise Austra would make next, I made my way back to the main stage.

Walk Off the Earth was one of the headlining acts of the festival, but it would have been much better if they weren’t.

I find it hard to justify a band that comes off as an over-glorified cover band as a headliner. While the band did start off as a cover band in 2012, they do have a vast collection of original songs under their belt now that they could have performed. Instead, they started their set off with yet another cover of Sheeran’s “Shape of You”. While this could have just been a miscommunication between acts, it felt like a cheap attempt to play on the song’s current popularity. The band’s frontwoman Sarah Blackwood also swore in the first few minutes of the performance, which probably wasn’t the most tasteful for the young ones in the crowd. The rest of the set consisted of more covers of popular songs, painful attempts at audience participation and a ridiculous amount of smoke and fire effects. It seems that the band hasn’t grown much over the years and is still doing the same type of performances that they were when they started, like the one where they all play on the same guitar and sing Gotye’s “Somebody That I Used to Know”.

By the time Serena Ryder took the stage, the sun was gone and the temperature dropped significantly. As a result, almost half of those present for Walk Off the Earth had walked off to somewhere warmer. Ryder released her latest album Utopia on May 26th and seemed excited to perform her new music for the first time at the festival.

Although the overall choice of talent was questionable, the level of production that CBC put into the festival was notable. They were pushing their CBC Music app and the whole festival was available to be live streamed through it. There were large screens with the live stream playing on them so that festival goers could watch the performances while sitting on the grass around the main stage. Live streaming is great feature because of course I would rather see this festival cozied up on my couch, rather than dodging kids that had been rolling around in the sand all day. Poor attendance at the actual festival can’t be good news for CBC’s bottom line, but that is for them to figure out. The beach was far from full and if anything, they should be wanting more people to fill that empty space.

All things considered, CBC Music Festival was a great day for those looking to laze around and be entertained for a relatively small price. I would argue that next year, the organizers should keep their eyes peeled for Canadian artists that will bring more energy and crowds to keep this festival alive for years to come.

Josie is a student in her third year of Journalism at Ryerson University in Toronto. She loves going to concerts, exploring the city and often indulges in an endless stream of cat videos. She is also minoring in politics, but is completely unsure why.
RELATED ARTICLES
austrabroscbc music festival
7.0