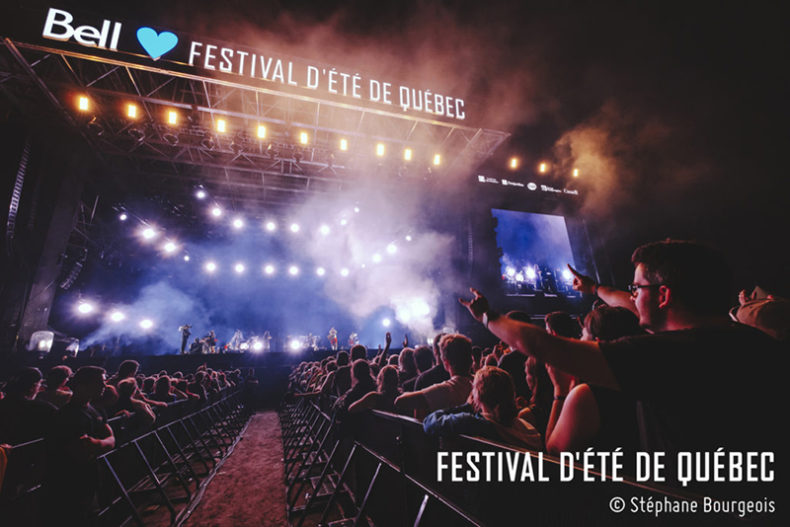 For the 50th consecutive year, beautiful, historic Québec City was host to the Festival d’Été de Québec. The 11-day-long celebration has continuously grown bigger and better over the years.The first festival was held  in 1968, and the small lineup was limited to a handful of talented francophone artists. Over its 50 year span, the festival lineup has grown to international superstar status, and the Bell Stage on the historic plains of Abraham is the largest self-supporting stage in North America, with room for 80,000 spectators. It has been the scene of some of the biggest acts in the world. Headlining acts over the past few years have included The Rolling Stones, Lady Gaga, Foo Fighters , Metallica, Elton John, Iron Maiden, Billy Joel, Bon Jovi, Sting, Stevie Wonder and The Black Keys. The festival now boasts several stages spread throughout the downtown core, and has grown to magical proportions.

This year, the list of headliners was equally impressive, and for the first time, Spill Magazine was there.  Following are reviews for a few of the dozens of acts that graced the stages spread over the core of Québec City.
Many thanks to the Festival d’Été de Québec.  What a marvelous time! We certainly hope to see you again!

What better musical icon to help celebrate the fiftieth anniversary of the Festival d’Été de Québec than Michel Louvain. The mood was certainly festive for a party under the stars, as Louvain celebrated his eightieth birthday. A member of the Order Of Canada, M. Louvain has a career in music, radio, and television, spanning over 60 years, and this is clearly apparent when seeing the age range that filled every vantage point near the Hydro-Québec stage for his performance. The crowd was wowed by the appearance of International star Roch Voisine who joined Louvain for a mini set which included “La belle vie”, as well as a duet of his own hit “Hélène”. Louvain was also joined by a number of illustrious performers, including Mario Pelchat, Marie-Ève Janvier, and Brigitte Boisjoli. The octogenarian, who would have preferred to be celebrating his “four times twentieth birthday”, was treated several times to spontaneous birthday songs by the audience. Chatting with the audience and sharing stories between numbers, spectators also sang along and danced with his original recordings, as well as covers that included Dean Martin’s “That’s Amore”, and Neil Diamond’s “Sweet Caroline”. Merci Monsieur Louvain! Bonne Fête, and many more! 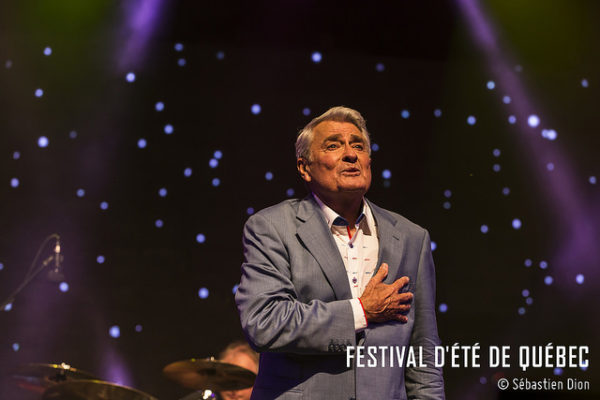 Mont Laurier, Québec’s Bobby Bazini packed the house at the Loto-Québec stage, treating festival goers to his own brand of soul pop, sirop d’érable drizzled harmonies. Spewing out tunes from his first three albums, the first two of which have been certified platinum in Canada, the gentleman is clearly a crowd pleaser. With a voice reminiscent of Macy Gray, he was supported by his back up band, that includes two angelic vocalists, providing the soothing harmonies that have quickly become his trademark.

Bazini breezed through his repertoire of songs which included crowd pleasers “Leonard Cohen”, “Bubblegum”, “Stranger”, as well as a cover of québecois legend Felix Leclerc’s “Le train du nord”. Joined at one point onstage by his brother Kevin Bazinet, the pair belted out a passionate version of The Bee Gees’ “To Love Somebody”. Bazinet is no stranger to the music scene, as he was the 2015 winner of La Voix, the French Canadian version of TV’s The Voice. The highlights of the set, however, were his performances of “Wish You Were Here”, which had spectators holding up their cell phones in a sea of glowing lights, and his finale, his recent hit “C’est la vie”, to which the entire audience sang along.

Bobby Bazini is going places fast. That place is up – and if you haven’t heard of him yet, pay attention. You will. 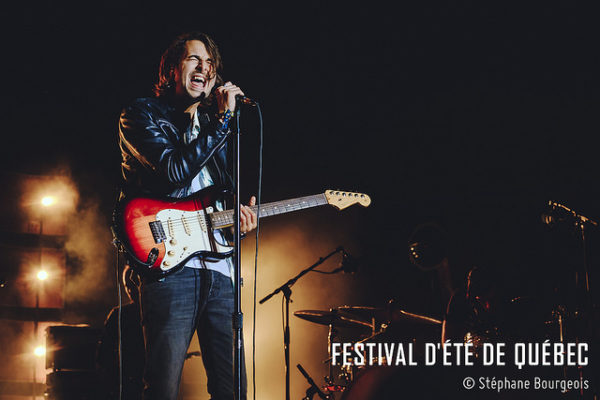 Apparently, Kingston’s The Glorious Sons was the festival’s best kept secret. Although the Juno Award nominated band is used to playing sold out venues, people were elsewhere tonight, as a sparse crowd gathered at the Fibe Stage at Place de l’Assemblée Nationale for the free show. In no way, however, did the low numbers have any effect on the energy and magnitude of the performance of this grab-the-audience-by-the-balls band.

Don’t let that baby face fool you – Brett Emmons’ is the ultimate front man.  From the moment he rips the microphone off his stand, he wraps the audience around this little finger, and doesn’t let go.  He is passionate and commanding.  The five-piece is tight, and plays with a passion and conviction that is becoming rare these days.

Plowing through many of their hard rocking hits, including “Heavy” and “Mama”, the set list was gently balanced with ballads such as “Sometimes On A Sunday”.  The blue-collar-influenced boys blasted relentlessly through to finales “White Noise” and “Kill the Lights”.

Emmons laments in “Kill the Lights” – ‘Kill the lights, babe I’m too damn tired, We can’t f*ck tonight, I’m workin’ double tomorrow”. Anyone who stayed to the end of this “glorious” performance was left feeling otherwise. 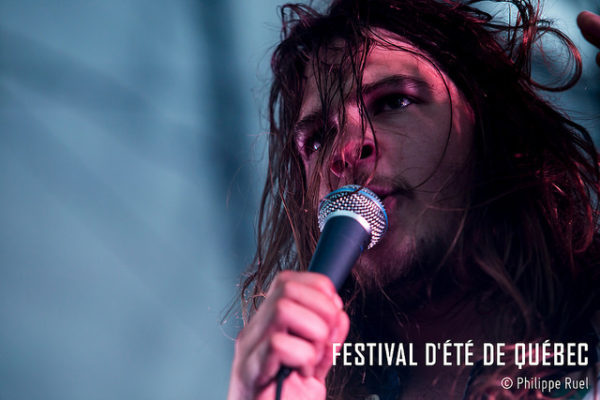 Well, the rumours are true. Muse puts on one of the best live shows around. Nothing like a grand finale Québec!

Bell Stadium was filled to capacity for the final grand performance of the festival. From the moment the British lads set foot on the stage, until the final encore, they did not disappoint. Opening the night with “Dig Down”, the band belted out the familiar crowd pleasing numbers, including “Psycho”, “Hysteria” (which included an outro cover of AC/DC’s Back In Black), “Resistance”, and “Stockholm Syndrome”, and never backed down, until they topped off the night with encores “Uprising” and “Knights of Sedonia”. Muse loves to keep the audience guessing, beginning and ending many of their numbers with intro and outro covers, including snippets from such bands as Led Zeppelin, Reaper, Rage Against The Machine, and Status Quo.  They also performed a cover of “New Kind Of Kick” by The Cramps.
Matt Bellamy is the ultimate front man. The singer/guitarist can mesmerizingly coax the most magical fuzz and feedback from his amps, giving one the impression that they have come to life and may start to dance on the stage. The band is tight, the energy is out of this world, and the audience went wild with appreciation.

Unfortunately, the dozen or so giant balloons the crew tried to coax off the stage into the audience were merely denied by the winds, and ended up neatly parked in the VIP Port-A-Potty area and backstage, and was not meant to be. Special effects were redeemed, however, when cannons were blasted into the unsuspecting audience, creating a virtual monsoon of confetti and ticker tape that will no doubt show traces of its launch next year on the Plains of Abraham. The multimedia presentation that served as a backdrop was also fitting, and completed the mood of the evening.

The highlight of the show would have to be the throngs of thousands, jumping along and singing to the super fuzzy “Supermassive Black Hole”.  The favourite delightfully opened with the intro to Jimi Hendrix Experience’s “Voodoo Child”.

It was an incredible performance and live show that was the perfect finishing touch to an amazing festival.  Merci Muse! 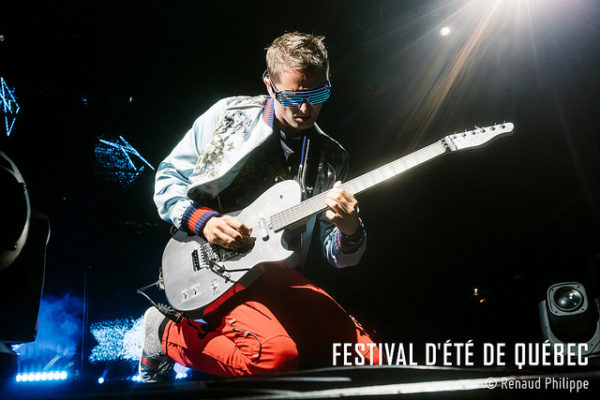 A Tribe Called Red had a short evening slot on the main stage and wasted no time in delivering. After a brief delay, the DJ trio burst into their first number and the crowd went wild. It was a busy night for the Ottawa trio, as they opened EDM night at the Bell Stage on the Plains of Abraham, while ahead of them lay another performance at the Imperial Bell Stage on St Joseph to close off the night.

The Juno Award winning band has just been short listed to the Polaris Music for the second time. Their show holds an eclectic mix of multimedia screen projection and live indigenous dance performances, which does not fail to drive the audience wild. It is a  heart strong place where multimedia and performance can cross over and carry the political message. Based on the audience reaction, it is a recipe that can’t fail. 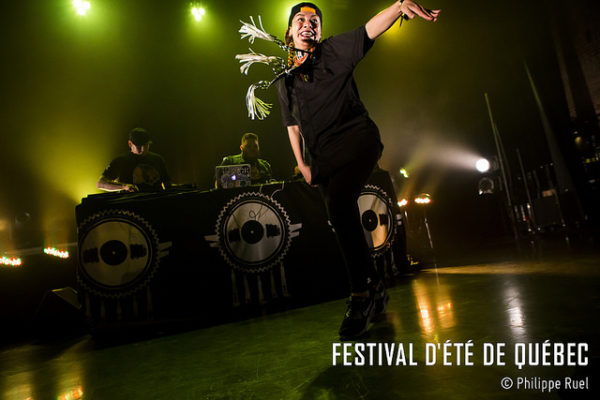 I was star struck by the presence of Pete Townshend and Roger Daltrey. The guitar playing was bang on, and the vocals were better than either Rod Stewart or Mick Jagger could offer these days. Zak Starkey did an amazing job, it was fitting that he would fill the shoes of his godfather Keith moon. He has the same flare.

The setlist was heavy on tracks from both Tommy and Quadrophenia, featuring movie clips as a backdrop on the jumbo screen. Touching tributes to Keith Moon and John Entwhistle also elicited cheers from the multi aged audience.

Minor technical difficulties did not detract from the performance; an inability to hear the keyboards at the intro to “Love, Reign o’er Me” was soon corrected, and it appeared at times that Townshend’s guitar pedals didn’t seem to work. Some songs sounded like they were tuned down to a lower key, gracefully, which did not in any way diminish the performance.

Thanks to The Who for a fantastic show, and “Long Live Rock”. 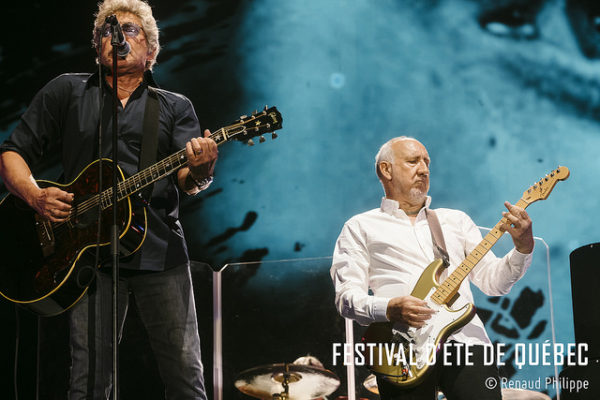 The Struts opened for the Who and brought us back to 1978 Rock’n’Roll.

Luke Spiller is a compelling front man. The young singer has the charisma of both Freddie Mecury and Steven Tyler, and the band makes no bones about the influences that both Queen and Aerosmith have had on them. The Québec audience embraced Spiller’s English accent, good looks, and personal charm, as well as the band’s steady backing.

The audience couldn’t help but sing along to crowd favourites “Kiss This”, and “Could Have Been Me”.  Other crowd pleasers included “Dirty Sexy Money” and “These Times Are Changing”.

This band is a relatively new experience for me, in that it was as comfortable and amusing as if I had been listening to them for ten years, when in fact it has been only one. Spiller asked the audience if they will be attending the next Struts show in Québec City.  The audience roared, however, only a fraction of that will keep their word, but this is an example of how commanding he is. It’s not only the music, but the banter in between.

It’s only Rock n roll but Québec City likes it… 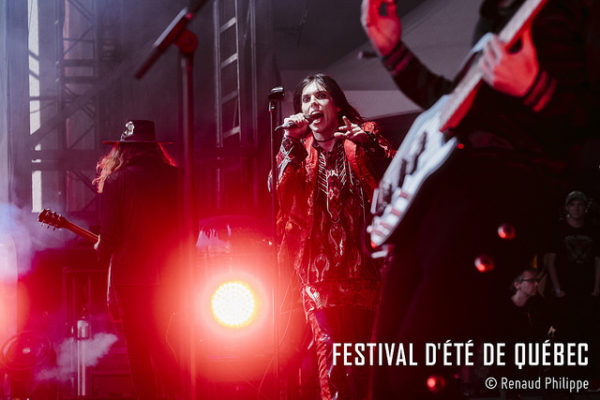 Metallica. Racing hearts roar on the Plains of Abraham…

This was the second time I had seen them on this same site since 2011, and this performance was much better, perhaps due to the stage being smaller and tighter, as was explained by the band.  They had performed their first gig in Québec in 1985, the city certainly hopes this is not the last.

Metallica and Québec get along well together: fists in the air, no borders, all on the same side. The HEY-HEY-HEY audience chant comes and goes throughout the night, and keeps everyone locked together.  The band weaves in and out through a varied assortment of their repertoire:  from the opening “Hard Wired To Self Destruct”, through “One”, “For Whom The Bell Tolls”, “Nothing Else Matters”, and lastly to their finale of “Enter Sandman”. Kirk Hammett held up a guitar pick onto which “Québec” was engraved, tossed it into the audience, and the show came to a close.

Another victory for Metallica on the Plains of Abraham.  Oui, oui .. c’est bon! 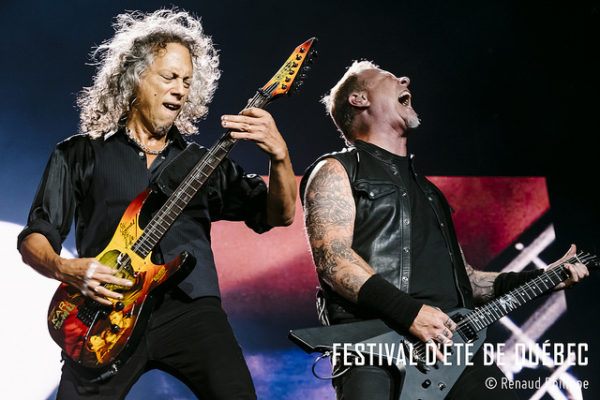