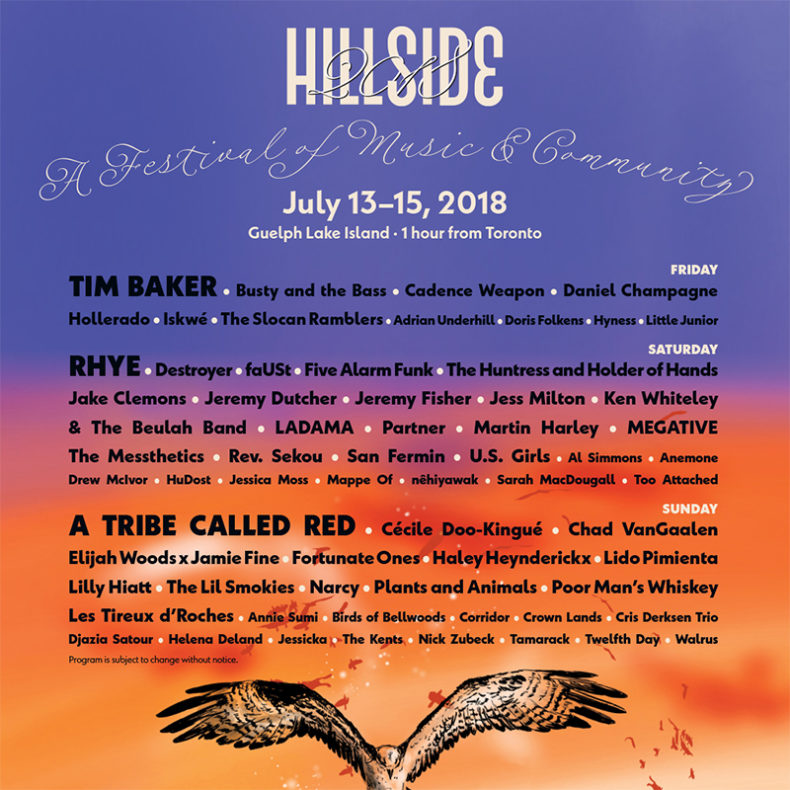 The theme of this year’s festival was countering hate with beauty – tireless efforts were made to ensure that was weaved throughout the festival. There were a lot of artists who brought their activism and passionate energy to the table. Hazel, who is on the Hillside Board of Directors, mentioned “This was a year that didn’t have a lot of big names on the bill, people didn’t recognize the artists as much. But these are the years where you leave feeling like you just saw your new favourite bands – which is really great. The indigenous representation was fantastic this year. My standout show of the weekend was Iskwe on Friday night, she set it on fire! Jeremy Dutcher from Northern New Brunswick did a workshop with A Tribe Called Red; they always bring such amazing energy. It was really interesting — for people who are paying attention, it’s clear that Canada’s colonial roots are really showing. It is still very obvious that there’s still a lot of work to do — having such amazing indigenous representation bringing activism and having crowds go wild gives some respect that is long overdue. I found that pretty amazing. It was nice to be on an island surrounded by people who are pushing back against the stuff that is happening in the world right now; it was very hopeful.” 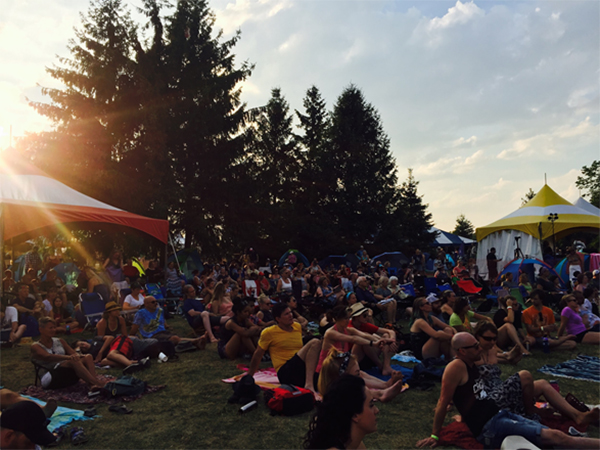 Being seconds away from labour and delivery, Lido Pimienta rocked the Island Stage and captivated the attention of hundreds of festival goers who were awed by the trio’s unique performance. Her personalized anecdotes between songs provided memorable and relevant stories, giving context to each song, and keeping the crowd more than engaged. She encouraged constant participation, empowerment of women, positive self-image, and used her voice to inspire and energize the crowd. We were graced to see their last show on their tour, leaving Hillsiders buzzing and wanting more. The infectious dancing, fiery Latin personality, and minimal electronic and live percussion were the perfect onstage threesome to distract people from the sweltering heat.

For the last while, the band toured around UK, France, Germany, Switzerland, Canada & US. Today, the band played from their previous album, “La Papessa,” which won the Polaris Music Prize in 2017. As Kvesche (the beatmaster of the trio) mentioned, “…the set has been built over the past year. There’s been an evolution of sound. We wanted to keep things compact to sound better & replace some elements – it’s a modular and adaptable sound so we can change the arrangements. We can play different versions of each song. There’s a lot of spontaneity, things happened today that have never happened before. We communicate onstage and have instrumental synergy.”

Kvesche continued, “Lido’s new producer is putting in new sounds, it’s electronic dance oriented, and has largely vocal and percussive elements. She’s  Indigenous from the northern part of Colombia, “Wayuu”. Her heritage and family inspired her sounds, and she works on all the songwriting. We work together where Lido will sing a melody and from there we work together back and forth with different song versions – there’s lots of trial and error and figuring out what she wants to backup her vocals with. There’s a familial bond in creating something together. Lido has known A Tribe Called Red for a while and has gone on tour with them – it’s a small community. They have a couple of songs together, Lido directed a video for them; they share production and ideas in collaborations. Lido has lots of partnerships with musicians from South America, Europe.” 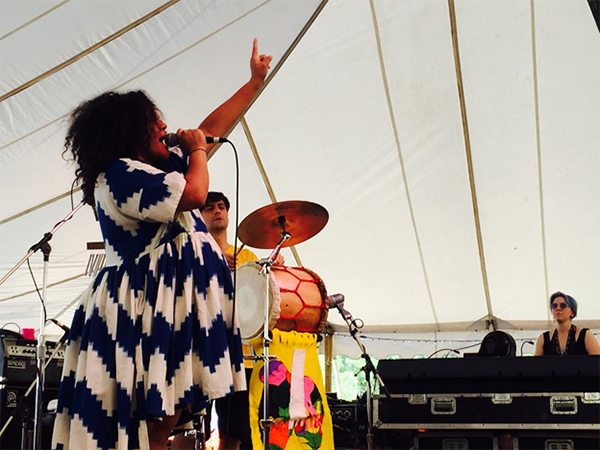 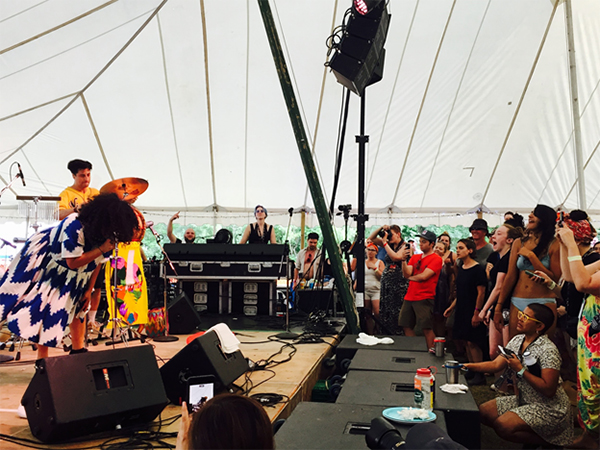 At the Main Stage, which was a plant and grass-covered roof, audience member Susanna mentioned, “Jaime Fine was really funny and I enjoyed the group dynamic, there was high energy and upbeat tempos – the shirtless drummer was a definite bonus! They have a cool mix of various styles and incorporate unique sounds into their set”. “Ain’t Easy” as one of the wrap up crowd-pleasing songs, brought more of a pop element to the generally alternative festival. 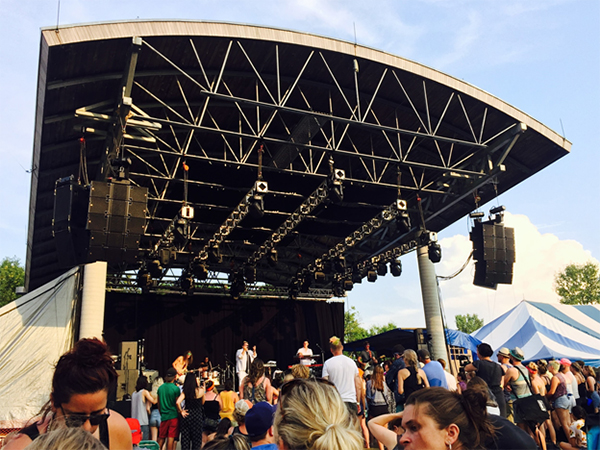 Stage presence, uniquely dressed, beat oriented, and fused with a horn section with trumpet and tuba, were hard to miss during an early evening performance by Narcy. Interesting visuals rotated through the projector – incorporating Family Guy clips between songs, even featuring a DIY music video that his son, Shemps, had made for him. He wrote a song for Shemps (meaning Sun in Arabic). “Share the music, share the culture,” said Narcy. And that we did.

“My Heart is Yours” enveloped the audience is pure vocal harmonies. The stellar bass solos, banjo twangs, mandolin diddles and folky vibes got the audience dancing and singing along with the band. The singer/mandolin players were interacting with the audience. Stephen Joffe, lead singer, ensured group singalongs to choruses – encouraging full participation. Joffe went on, “We’re like sharks, if we stop we die.”

Catching up with Birds of Bellwoods after the show, Joffe commented, “WOW. It was a total pleasure to be a part of this year’s Hillside community and we loved how ready the audience was to get to their feet and sweat it out with us. Up next we’ll be dropping a new single (“Melatonin”) at the end of this month, and hitting the road for performances at Osheaga, Kee to Bala, The CNE, and more. Keep posted on our socials and at www.birdsofbellwoods.com for updates!” 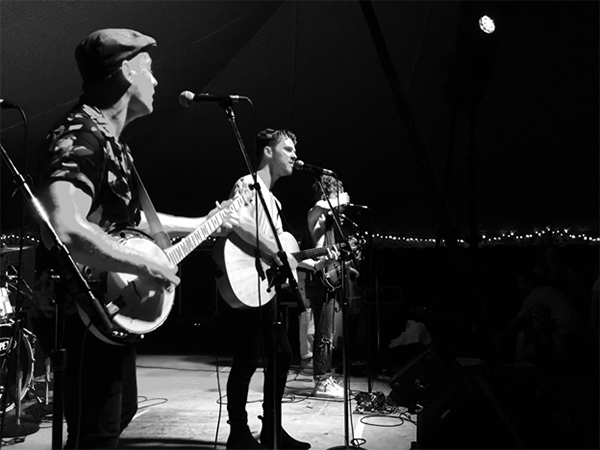 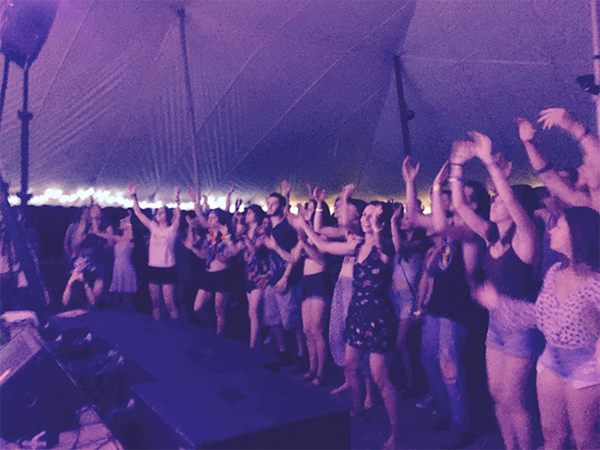 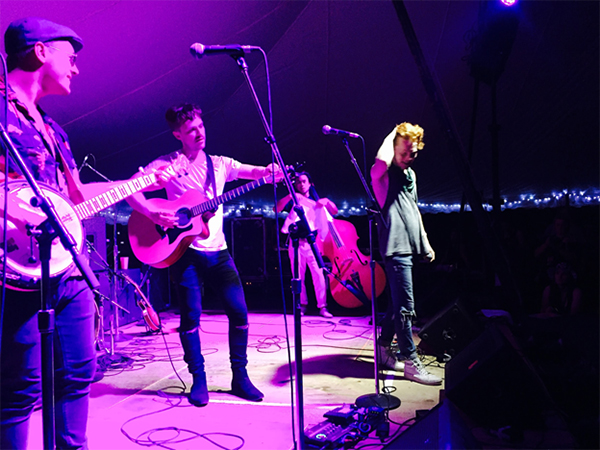 There was a huge juxtaposition of culture and tradition with videos of powwows and even the Michael Jackson “Black or White” music video, with the common thread of Indigenous media representation (aka misrepresentation) from recent decades. A Tribe Called Red brought an unstoppable and incredible presence – such a commanding and ubiquitous force on stage.

As Hannah, fan of the band, stated, “It’s impossible to stay still, you become entrenched in a world of contemporary electronic and hip hop music and Indigenous history, performance, vocals and traditions.” It was the perfect wrap and culmination up to such a communal, family friendly, mindful and politically and environmentally active festival. The energy was high perfect weather graced us with a gorgeously yellow moon sliver overlooking the lake – the reflection glistened off the moving water with the stars twinkling brightly in the clear sky. 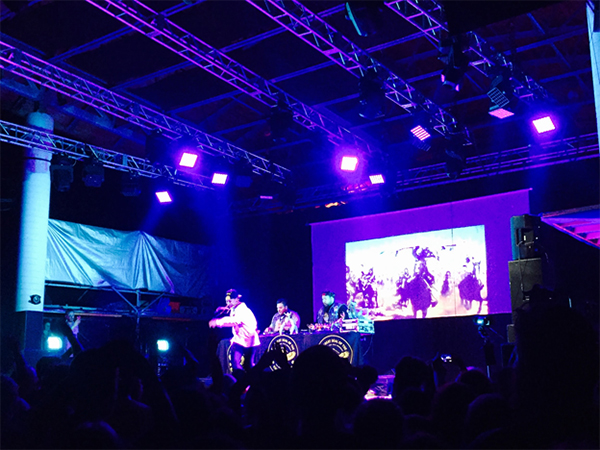 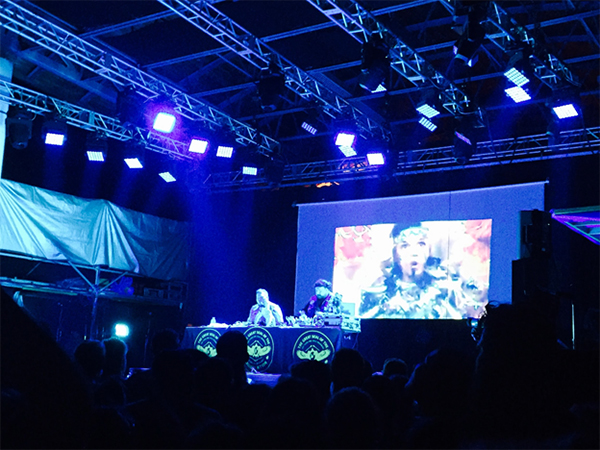 Originally from Toronto, Giselle is exploring the worlds of entertainment and social change through a musician's lens. With a background in Environmental Studies and Music Business, she works to establish her own voice in the music scene.
RELATED ARTICLES
a tribe called redbirds of bellwoodsfestival