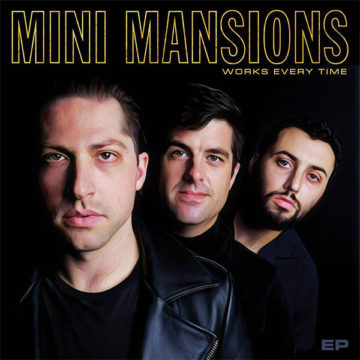 For their first release since 2015’s full length album, The Great Pretenders, Mini Mansions have returned with Works Every Time, a four track EP released with the purpose of ushering in a new sound and era for that band as they approach their ten year anniversary. While it may be short, the band – consisting of Queens Of The Stone Age’s Michael Shuman, The Last Shadow Puppets’ Zach Dawes, and Artic Monkeys’ live keyboardist Tyler Parkford – achieve just what they hoped to with Works Every Time.

The EP opens with the Parkford-sung title track; a moody pop track brimming with lush synths and layered vocals over a crisp beat. The song also features a sleek and slightly sleazy guitar solo that only adds to the song’s attitude and overall mood. Where this may very well be the most straightforward synth-pop track on the EP, it shares a slight similarity to that of QOTSA and Arctic Monkeys; something that immediately separates it from its peers. Parkford also sings “This Bullet”, the heaviest track on the EP, that feels reminiscent of early Nine Inch Nails with a strong pop sensibility and also features one of the EP’s coolest instrumental breakdowns.

For the rest of the release, Shuman takes the lead vocals, shining on the glossy “Midnight In Tokyo”. Singing with a certain swagger that rests between Bowie and Alex Turner, Shuman leads the song with a rich layer of charisma that only grows when the crunchy guitar riff comes in during the chorus. The EP comes to a close with a cover of Edwyn Collins’ 1994 hit, “A Girl Like You”; however, rather than take the direction of the original, Mini Mansions fully embrace an air of darkness that Collins only implied in his songwriting. As a result, the cover is incredibly sleazy and slick with Shuman’s vocals resembling that of Marilyn Manson as the instrumental parts flourish in a sense of organized chaos.

All in all, Works Every Time takes Mini Mansions in a slightly more mainstream direction, which very well may be for the better. The EP is an excellent example of synth-pop at its finest as the band incorporates a plethora of alternative rock influences to create four highly moody and atmospheric tracks that certainly deliver. Where fans may be left feeling disappointed in its length, Works Every Time will certainly leave them excited for their highly anticipated full length album slated for 2019.

A passion for music has always been a part of Gerrod’s life. As a young boy, he was raised on a steady diet of the music from The Chili Peppers, Aerosmith, The Stones, Prince, and others from his mum. Raised in the GTA, Gerrod continued to foster his love for music by attending a wide range of concerts and learning the drums. His unapologetic passion for music has no bounds and has spread to a wide variety of styles, whether it be the 90’s rock that sound tracked his teenage years, the jazz he studied in university, or his newfound love for hip-hop. He recently received his bachelors in music and education from York University and is passionate about writing and reviewing good (and less than good) music. Gerrod is also the drummer and songwriter for a Toronto based rock & roll band, One In The Chamber.
RELATED ARTICLES
album reviewalbum reviewsmini mansions
9.0