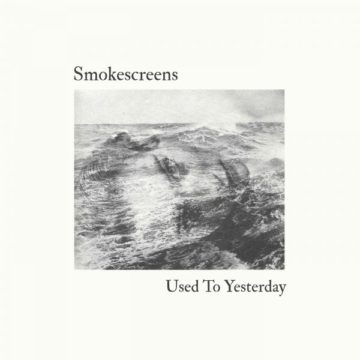 LA-based New Zealand-esque band “Smokescreens” hit back with their second album review, Used to Yesterday. After a careful gleaning of the album title, it could be considered ironic, seeing as how it’s a slight change from the Kiwi noise pop from their eponymous album which begs to ask the question – can you get used to yesterday?

Clocking in at ten tracks totaling 30 mins, Smokescreens open with the dreamworld-like  “Someone New”, with fuzzy guitars painting an easy listening, simplistic, melodious journey as you float away with Rosi’s vocals. The fun continues with the upbeat title track “Used to Yesterday” as their garage wall of sound takes you on a nostalgic journey to yesteryears. Moving on to “Jolly Jane”, we get a new vocalist peppered into the mix, which adds a little more window dressing than what we’ve heard on the previous tracks, as again, the dreamy garage soundscape. One impressive feat on this album is their cover of “Steel Blue Skies” by Wasp Factory (another New Zealand band). If I didn’t know any better, it doesn’t sound like a cover, as it has the same instrumental sounds as the other songs on this album. Kudos to Smokescreens for promoting their brand of sound and weaving it into this cover. As we delve deeper into the album, with pacing changes from the slow burn “Buddy”/bluesy “Fool Me” to the faster paced “Waiting For Summer”/“It’s Not Right”, Smokescreens display their ability to give us a complete album that shows us a spectrum of the band’s character traits while balancing brighter songs with  slower, more mellow ones. One my personal faves on the album is highlighted with the hypnotic “It’s Not Right” as it ebbs and flows with an intimate, melancholic growth. At the end of the album with “Falling Down”, we get a delightful veering off the path in regards to instrumentals with a lovely addition of stringed instruments. Although the anthemic vocal repetition of the words “Falling Down” can get tedious at times, it falls in line with the rest of the album, as this trope seems to be a painted staple among the tracks.

Rosi’s understated vocals, which are just right for this type of sound on the album, provide a luxurious essence misting over the songs. While listening to the album, with the different pacing of the tracks, I think Used to Yesterday’s 30 mins length is a fair restraint for this album, as it gives us a similar wall of sound while the melodic daydreaming adorns your auricles. At the end of this experience, it’s intriguing to listen to Smokescreens, as they intertwine their homage to New Zealand pop while crafting their own dream-pop wall of sound, shimmering ethereally into the vast expanse of your consciousness.

Insert pretentious stuff about me here. I was born at a very young age. I am pretty, funny... without the comma. Easily distracte
RELATED ARTICLES
album reviewalbum reviewsslumberland records
9.0