Features
947
previous article
SPILL ALBUM REVIEW: SHAWN BENFIELD - THE SHORTER IT GETS, THE HARDER IT HITS​.​.​.
next article
SPILL FEATURE: WE'LL GIVE HIM GOLD AND FRANKINCENSE. BUT WAIT...THERE'S MYRRH! (PART ONE) - A SPILL MAGAZINE BREAKDOWN OF SOME OF THE TOP 2020 CHRISTMAS RELEASES 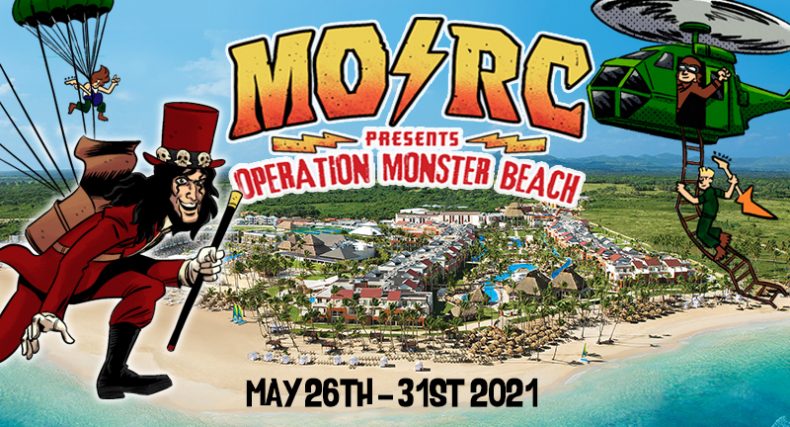 THE CRUISE SHOW MUST GO ON!

Heavy metal fans aren’t going to let a worldwide pandemic stand in the way of their fun.  With cruising at a virtual standstill, Monsters of Rock, which for a decade has been the ultimate seagoing celebration of the explosive world of hard rock and metal, is taking the party ashore!

Originally scheduled to sail in Feb. 2021 from Fort Lauderdale aboard Royal Caribbean’s Independence of the Seas, the Monsters are saying “land ho” and taking over two all-inclusive (yes, that means unlimited booze) Punta Cana resorts–Breathless and Now Onyx—from May 26 to 31, 2021.  Both resorts share the same beachfront location and Monsters Of Rock guests are welcome throughout the properties, including all restaurants, bars, pools, and other amenities–sort of like a cruise without going anywhere.

Breathless and Now Onyx might offer chic, contemporary suites, all-inclusive dining and drinks, free wi-fi and breathtaking beaches but, take it from me, these heavy metal maniacs couldn’t care less.  As with any music cruise, it’s ALL about the bands–and what a monster lineup we have!

Master of shock rock, Alice Cooper, will ignite the stage with the explosive and theatrical performances that have made him a metal icon for the past five decades, and will debut material from his upcoming album Detroit Stories.  Other confirmed acts include Lit, Winger, LA Guns, KIX, Great White, Pat Travers, H.E.A.T., Vixen, Eclipse, Killer Dwarfs, Black N’ Blue, Mike Tramp, Bullet Boys, Beasto Blando, Pink Cream 69, Faster Pussycat, Electric Boys, Joel Hoekstra, XYZ, Little Caesar, and Signal 13, with more to be announced.  Artists will also participate in a host of interactive events like Artist Q&A sessions, Gong Show Karaoke, “So You Think You Can Shred” Challenge, Cooking with Rock Stars, Name that Monster Song, and more.

Because it simply wouldn’t be Monsters of Rock without a glimpse of beaches and blue water, many of the custom-built stages will be surfside and around the resorts’ numerous swimming pools.

Monsters of Rock: Operation Monster Beach has landed!  It promises to be loud, crazy, and the ultimate fantasy camp for any hard-rockin’ music enthusiast!

(And for progressive rock fans who prefer a traditional shipboard event, check out Cruise To The Edge featuring Marillion, Steve Hackett, Alan Parsons, Dweezil Zappa, Focus, Mike Portnoy, and more!  The five-day Cruise To The Edge aboard Royal Caribbean’s Navigator of the Seas, sets sail from Fort Lauderdale on April 25, 2022.   Visit https://cruisetotheedge.com for all the details!)

The Spill Magazine is a Toronto-based online publication dedicated to covering the independent music scene with a strong focus on our thriving hometown talent. Our writers bring you up-to-date news, in-depth features on musicians and reviews for the latest CD releases. We also travel to the front lines for all local festivals including Canadian Music Week and North by Northeast. Don’t forget to check out our Facebook and Twitter pages for all daily Spill updates.
RELATED ARTICLES
alice cooperfeaturesgreat white
8.0