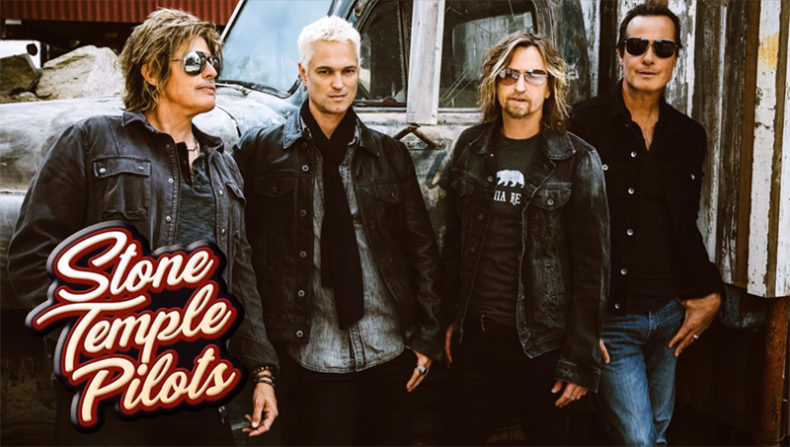 To say the least, the past few years have been nothing short of both tumultuous and tragic for Stone Temple Pilots. After reforming in 2010 with original vocalist Scott Weiland, the band went on tour and released their self-titled and sixth album; however Weiland and the band would part ways in 2013, prompting Stone Temple Pilots to collaborate with the late Chester Bennington where they would release High Rise later that year. Flash forward to 2015, towards the latter half of the year, Bennington would leave the band in order to devote all his focus and energy to Linkin Park, and then while on a solo tour, Weiland would perform his final show at Toronto’s Adelaide Hall on December 1st, only to pass away from a drug overdose just two days later. While mourning the loss of their friend and former band mate, the surviving members of Stone Temple Pilots- guitarist Dean DeLeo, bassist Robert DeLeo, and drummer Eric Kretz- began to search for a new vocalist to fill the shoes of not one, but two modern icons.

Up until November 14th, the name of their new singer has been one of the best kept secrets of the internet age; however it was revealed at an invite only show at Hollywood’s Troubadour that the band has recruited X Factor contestant and former Dry Cell vocalist Jeff Gutt. Being a diehard Weiland fan with a commemorative tattoo for the late frontman, I originally felt that the search for a new vocalist was an act of sacrilege; however, upon hearing the first single, “Meadow”, I could not have been more wrong. The single marks not only Stone Temple Pilots’ dramatic and much deserved return, but is also the first track to surface from their upcoming album that is slated for release in the spring of 2018. While High Rise was met with mixed reviews among critics and less than favourable attitudes from fans, “Meadows” already seems to be a step in the right direction with a return to the band’s unique blend of hard and alternative rock that made them among the greatest bands of the 1990’s.  In many ways, the track picks up where the band left off with their 2010 self-titled record, with Gutt’s vocals strikingly resembling Weiland’s from that period. The crunching riff shares a vibe from that same era, with a sense of nostalgia for 1994’s Purple and their 1996 follow up, Tiny Music… Songs From The Vatican Gift Shop.

Upon listening to whatever snippets of audio and video that I could find from their performance at the Troubadour, Gutt sounds eerily similar to Weiland, making him an appropriate choice in staying true to the band’s legacy and identity as one of the founders of modern rock, while different enough for them to clearly move forward in a way that is respectful to the art and legacy of Weiland. Furthermore, the band seems as tight as they always have, with a slight edge of ambition to move forward. And why shouldn’t they?  Stone Temple Pilots- while not nearly as big of a pop culture figure as their peers are today- still stand as one of the best band’s from the 90’s, with the DeLeo brothers acting as one of the greatest song writing duos the decade had seen. Their songs not only launched Stone Temple Pilots almost instantly to the top of the rock world- and continued to do so with a string of five flawless records between 1992 and 2001- but also pioneered the direction in which rock would follow into the 2000’s and into the present. Many other bands have moved forward with a different singer – Van Halen with Sammy Hagar, Alice In Chains with William DuVall, AC/DC with Brian Johnson, and Black Sabbath with Dio to name a few- and while each of these struck up a level of controversy, each allowed for these bands to continue forward.  From all that I have heard from their come-back performance and my deep appreciation for what Stone Temple Pilots have achieved and inspired, I can say that after hearing Jeff Gutt and “Meadow”, I am excited to see where Stone Temple Pilots choose to go next.

A passion for music has always been a part of Gerrod’s life. As a young boy, he was raised on a steady diet of the music from The Chili Peppers, Aerosmith, The Stones, Prince, and others from his mum. Raised in the GTA, Gerrod continued to foster his love for music by attending a wide range of concerts and learning the drums. His unapologetic passion for music has no bounds and has spread to a wide variety of styles, whether it be the 90’s rock that sound tracked his teenage years, the jazz he studied in university, or his newfound love for hip-hop. He recently received his bachelors in music and education from York University and is passionate about writing and reviewing good (and less than good) music. Gerrod is also the drummer and songwriter for a Toronto based rock & roll band, One In The Chamber.
RELATED ARTICLES
featuresjeff guttmeadow