SPILL FEATURE: STARS ON GUITARS: 60 YEARS OF SURF ROCK WITH THE VENTURES – A CONVERSATION WITH DON & STACI WILSON 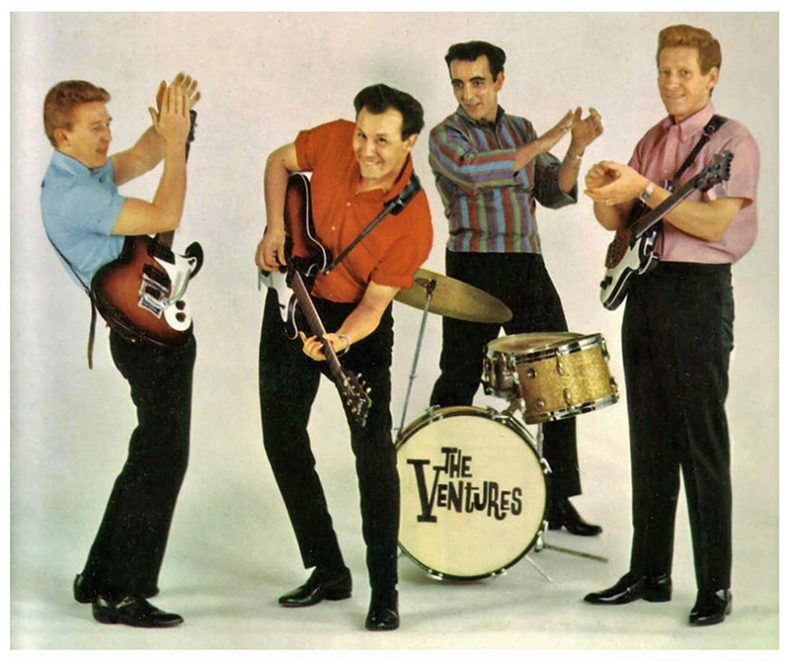 STARS ON GUITARS: 60 YEARS OF SURF ROCK WITH THE VENTURES

A CONVERSATION WITH DON & STACI WILSON

It’s hard to believe that 2019 is the 60th anniversary of the debut of the best-selling instrumental rock band of all-time, The Ventures, whose discography includes covers of such first-rate hits as “Hawaii 5-0”, “Walk, Don’t Run”, “Telstar” and “The Lonely Bull”.

In celebration of their storied history which has influenced a wide range of musicians world-wide, Staci Layne Wilson, the daughter of co-founding member Don Wilson of The Ventures, has spearheaded the production of an upcoming documentary to honour their 60th anniversary.  The Ventures: Stars on Guitars feature length documentary is currently in the editing and post-production phase.

Don Wilson, the last surviving and founding member of The Ventures, along with Bob Bogle, began their amazing careers in, of all places, Tacoma, Washington, far from the California beaches where their “surf rock” sound resonates.

“The day I met Bob Bogle, I was working in my father’s used car lot, The Bargain Spot, in Tacoma, Washington. He came in to look at a car he wanted to buy, but not being much of a salesman, I made him wait until Duane Eddy’s “Rebel Rouser” had finished playing on the radio! Turns out he loved that song, too.”.

“We liked The Versatones and The Impacts, but those names were already taken, and thank goodness, because they sound dated now. As you say, my mom, Josie Wilson (who was acting as our publicist and manager in the very beginning) said, “Well, since you’re ‘venturing’ out into a new style of music, how about The Ventures?” and it stuck. Mom, Bob Bogle, and I registered the name.”

In 1960, The Ventures released their first full-length album, Walk Don’t Run, featuring Don Wilson on rhythm guitar, Bob Bogle on lead guitar, Nokie Edwards on bass and Howie Johnson on the drums.  The Ventures went on to release over 200 more albums, becoming a phenomenon in Japan where they outsold The Beatles 2-to-1 in the 1960s and performing to audiences worldwide, while influencing a plethora of musicians along the way.

The Ventures have played some memorable places, and have received incredible support from Japanese fans.

“It means absolutely everything. The way we and our Japanese fans have connected, and maintained that connection, is nothing short of phenomenal. I certainly never expected it, but right from the very beginning they loved us. Still do, and of course we love them. I retired from touring in 2015, but still – I’ve been on thousands of stages all over the world. Nakano Sun Plaza in Japan is a really famous place. In fact another Pacific Northwest band, Nirvana, played their final Japanese concert there. We performed with The Go-Go’s at The Roxy, where we played “Surfing and Spying” – that was fun. More recently, my son Tim put together an all-star jam at the Anaheim NAMM Show, this was a few years back, and I performed with Jeff Cook from the band Alabama, and Seymour Duncan, a lifelong fan of The Ventures and of course the maker of the guitar pickups every serious musician uses… that was fun…”. 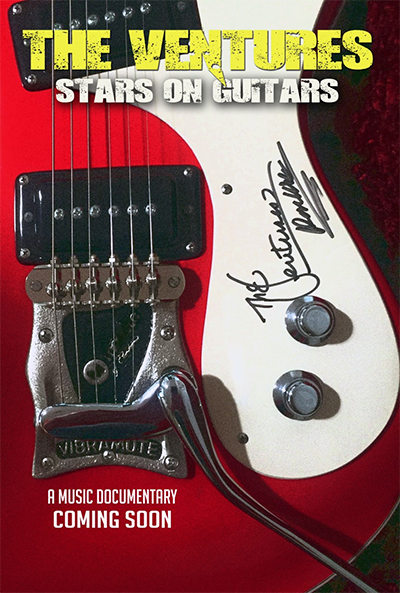 Of course, with Canada being in such close proximity to Tacoma, Washington, The Ventures made many trips to The Great White North early in their career.

“Early on, in the ‘60s, we drove to gigs all over the States and Canada in the winter. Sometimes we had a van, other times we were in cars. No first-class flights yet at that time. I remember us playing way out in Regina in 1962, and then Montreal, which is gorgeous. Since we’re on the border to Vancouver (in Washington State) we have, of course, played in Vancouver many, many times. Richard’s on Richards was a great place.”.

The influence of The Ventures on Canadian artists is reflected in the documentary with the inclusion of an interview with the great Randy Bachman of The Guess Who and Bachman-Turner Overdrive (BTO).

“I read somewhere that Neil Young had our albums and Neil Peart from Rush mentioned us in an interview. But Randy Bachman is just great – really proud to have him in our documentary. He likes The Shadows too, I know, and of course The Beatles and he recently put out an album of reimagined George Harrison songs. I’m a fan of his, too – especially in The Guess Who years. Such a great songwriter.”.

The Ventures have certainly appealed to a wide range of fans over the years, some more surprising than others.

“I was most surprised when Anthrax thanked us in the liner notes of one of their albums for being an inspiration. Like myself, Scott Ian plays rhythm guitar. So that was a surprise. He wanted to be in our documentary, but he got too busy with touring while we were filming.”

Staci also weighs in on The Ventures’ legacy to music during the lengthy documentary process.

“I’ve certainly learned a lot about how The Ventures are perceived and how revered they are for their innovations by musicians whose music I personally have loved for a lifetime. When I was a teenager blasting BTO in my car and damaging my eardrums to ‘You Ain’t Seen Nothing Yet’, it didn’t occur to me then that Randy Bachman might be a fan of my dad’s playing! It’s kind of surreal.” Staci also added “While The Ventures are a very male-centric band and most of their fans are men, I have made it a point to have some diversity in our roster of interviewees, and especially wanted to show that young women in bands are looking to The Ventures for inspiration.”

Staci had the opportunity to see her father perform with The Ventures and experience first-hand what it is to be on tour.

“I did get to see them when they played in L.A. in the ‘80s, which was a lot of fun. They did gigs at some of the iconic Hollywood clubs like The Starwood, The Whisky, The Peppermint Lounge. They used to play The Palomino a lot and one time, Nancy Sinatra joined them onstage and they played ‘These Boots Are Made For Walking’. And ‘Disneyland’! That was a fun one – got to see Dick Dale and Jan and Dean on the same bill. There were a lot of punk-rockers there. In the ‘90s, Dad treated each of us kids to our own trip to Japan for two weeks to tour with The Ventures. I saw some fantastic shows! And I also learned how much downtime there is… driving to and from gigs, waiting for the soundcheck, waiting between the soundcheck and the show, waiting for the band to sign autographs after the show… It’s not all spotlights and applause! But it’s certainly an experience I cherish. I also got to see some of Dad’s final shows in Tokyo during his retirement tour in 2015.”. 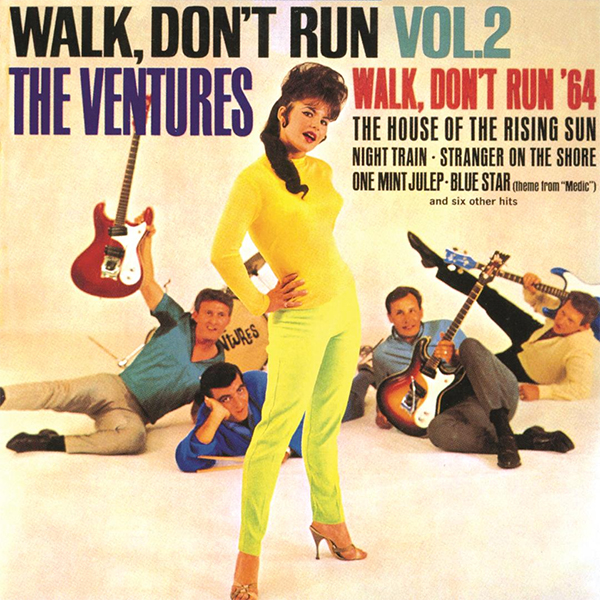 In 2008, The Ventures were honoured with an induction into the prestigious Rock & Roll Hall of Fame.

“The ceremony itself was wonderful. Sadly, my cofounder Bob Bogle was too sick to attend, and he passed away shortly afterward. So, I feel good that he was able to see that happen. Mom (Josie) passed away in 2007, so she didn’t. But… yes, it was great. John Fogerty inducted us. And he’s in our documentary, talking about that.”.

Don retired in 2015, but The Ventures continue on, touring and keeping the spirit of the original lineup’s spirit alive.

“I’m still a managing partner in The Ventures, but no – I don’t perform with them. I do get onstage every once in a while, for special occasions – like, Nokie Edwards’ memorial service in Tacoma, and then in December (2018) I performed onstage in Washington, DC to honour my friend Jeff “Skunk” Baxter on his 70th birthday at a charity event. That was great. There was a big jam session at the end with members of Boston, Grand Funk Railroad, The Nelsons, Duane Eddy, Slim Jim Phantom from The Stray Cats. We played ‘Walk, Don’t Run’. It’s fun to get out there sometimes, but after touring without a break from 1959 through 2015, I’m happy to just stick with the recording and producing side of things.”.

Ultimately, bands are like a second family to most involved and it seems quite fitting that The Ventures: Stars on Guitars documentary is truly a family affair in the nature it is being created.

“I think it’s special because we’re presenting this as a family – Dad, my brother Tim, our sister Jill, and myself (Staci). In addition to telling my dad’s story, I’m making a point of showing my grandmother’s involvement as well. Josie Wilson, my dad’s mother, was their biggest supporter when the group was just starting out. She even went so far as to start her own record label – unheard of for a woman in the 1950s – to press singles and get them played. She went on to produce a few of their albums and was given an honorary Grammy just prior to her death in 1996, recognizing her pioneering ways in the music industry.”.

Don, on what the documentary means to him and the legacy of The Ventures.

“Well, it means everything – especially since my children are producing it. My son Tim, daughter Jill, have helped gather interviewees and then my youngest daughter Staci is directing it and gathering photos, videos, conducting interviews, getting it edited. It’s a lot of work, covering the career of a band that’s now 60 years old! I’m really proud of my kids and I think it’s great that there’s finally going to be a documentary about us – some people in the past have said they would, but those projects fell through. I know my kids won’t give up! In fact, we’re nearly done with the movie now and I’m real excited for people to see it.”.

Staci anticipates that when completed, the documentary The Ventures: Stars on Guitars will be available on streaming services as well on the feature film big screen at film festivals.

John Graham is a Vancouver-area resident who typically spends most days admiring music of all genres. When not listening to music, John is usually at a live show, somewhere in the bowels of Vancouver.
RELATED ARTICLES
features