SPILL FEATURE: MUSIC FROM MARS? – A CONVERSATION WITH FOX MEDICINE 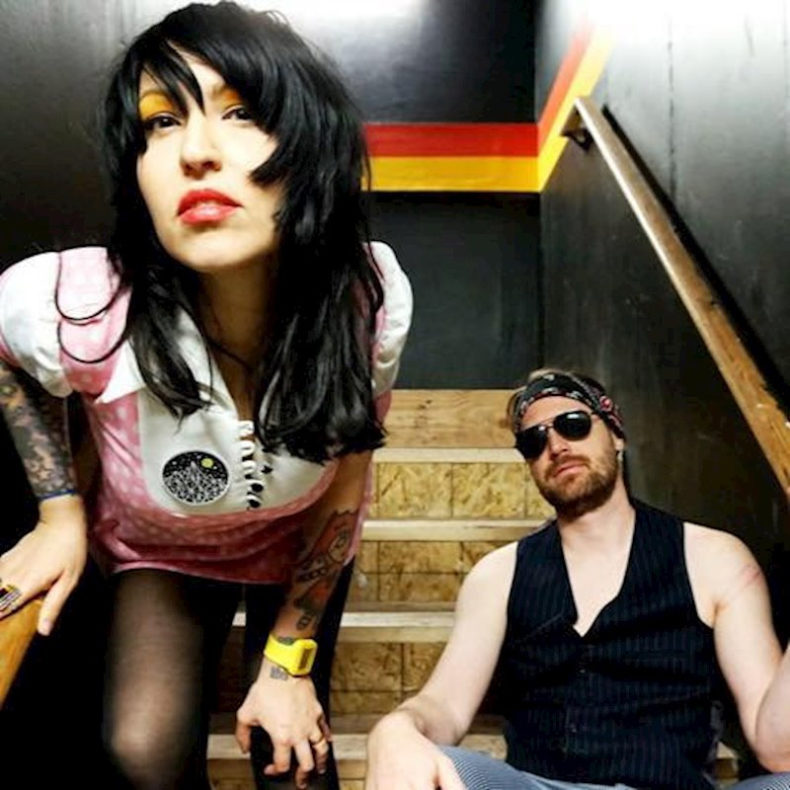 A CONVERSATION WITH FOX MEDICINE

Oregon noise rock duo Fox Medicine has followed up their raucous debut EP with an out-of-this-world launch of their new LP, Greetings from Mars. Guitarist, vocalist, and one half of the band, Neezy Dynamite chats with Spill Magazine about writing and recording the album, and contemplates what music might sound like in outer space.

Weighing in at a mere 8 tracks in length, Greetings from Mars is a small album with a balls-to-the-wall vision of bringing back gritty guitar music. Drawing from the guts of ’90s grunge and taking cues from sludge pioneers like Melvins and Boris, songwriter Neezy Dynamite and drummer Vanny Keeps are determined to drag everyone out of their comfort zones of auto-tune and easy listening. ‘It just seems to be very popular to not have very dangerous elements or ideas in music lately,’ she explains. ‘I’m trying to bring back a style of music that’s been dead for a long time, just to remind people that there’s still badass music out there.’

The band’s sonic uprising against homogeneity is led by Neezy’s signature vocals; a ferocious concoction of doll voice and ex-machina. Piercing and larger-than-life onstage, behind the ferocity is a bubbly personality who is up for a laugh about alien conspiracies and dreaming about fantastical life on Mars. ‘I think we’re drawn to other worlds because we want to reach beyond our world and artistic boundaries.’ Neezy reveals. ‘Once the human species sets up shop on Mars, what kind of music will be hip and what influences from Earth will prevail? These are fun to think about.’ The album title, Greetings from Mars, takes its inspiration from the duo’s delight in what’s beyond. ‘The concept is a postcard from outer space to remind you that there’s still other worlds out there and other ideas,’ Neezy fantasizes. ‘This [album] is what we fetched from the alien and from the subconscious collective mind, and we’re trying to send it out to people like a broadcast from outer space!’ 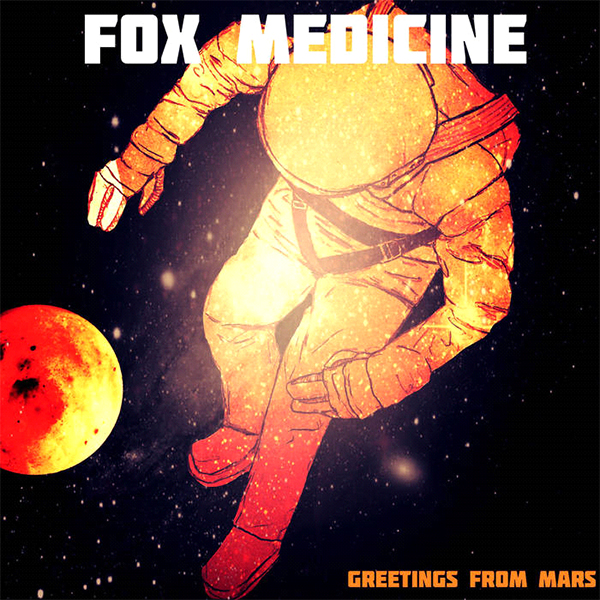 Fun, breezy and charismatic, Neezy is a departure from the grunge archetype that is too-strongly associated with heavy music: the brooding Cobain. ‘When we play shows, people are just so perplexed,’ she laughs. ‘Usually, they come talk to my drummer first because they’re too scared to talk to me at first, but when they do they’re all excited and puzzled. It just seems so foreign to them.’ For Neezy, though, riffing on the angst and energy of ’90s-era guitar music to fuel Fox Medicine’s sound made perfect sense. ‘I grew up with music like this, so it just feels natural to me,’ she explains. As tracks like “Licorice Lox” layer punishing Slayer double kicks with a high-pitched chorus of “ping ping pow pows,” it’s in this contradiction to our basal expectations that Fox Medicine finds its magnetic, distorted charm. ‘That was the mission with [this album]. It’s raw, it gets you pumped up and energized,’ describes Neezy. ‘The feedback I often get is: ‘Gnarly guitar music, how refreshing!’’

Going against the grain of regularity is what Neezy is all about with her songwriting, particularly after attempting to pursue a career without music. ‘I tried to stop writing songs for a few years, and basically said that I needed to focus on something else, I’m going to forbid myself to write songs because it’s very time-consuming. Once you’re open to them, they just hit you all the time,’ she explains. ‘In that time period, I learned that I cannot function unless I’m writing songs. I was becoming a real monster. Everything was pissing me off and I wasn’t very nice.’ When Neezy started writing music again, she felt that her true self came back to life. ‘It almost feels like it builds up, and if I don’t release it, that it’s going to change me.’ She adds with humour, ‘Maybe that’s why my music is so crazy, I try to repress all that in real life and be like ‘act normal, they’ll never suspect a thing!’’ 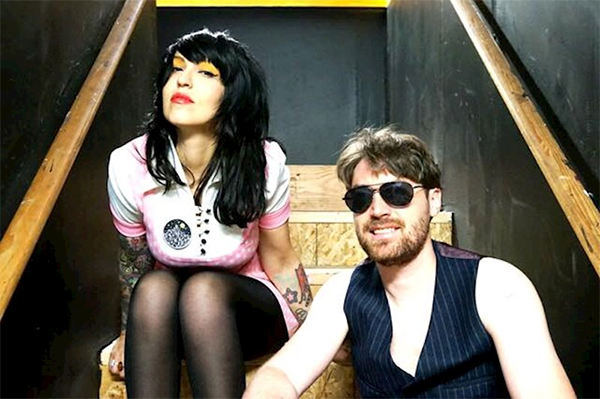 With their defiance of the norm and a fanciful fascination with outer space, it’s logical that Fox Medicine’s music takes on the form of escapism. The search for meaning in mesmerizing lyrics such as “Stars,” with its words asking, “Are you coming on to me, on a cellular level?”, are devoid of any predetermined thought. Instead, Neezy explains that her song’s vivid content and angular melodies come together in a much more primal way. ‘Lyrically, it’s almost that the song dictates to me what it wants to be like. Sometimes it’s just a title and I can feel the energy of the song as I’m playing my guitar and then the lyrics come, almost subconsciously. Like they fill themselves out.’ She further illustrates, ‘Best way I can describe the songwriting process is seeing a blurry picture in the distance: The more time you spend with it, little details show themselves, and then all of a sudden the colours are filled in and you see the whole picture.’

Despite the prominence of electrified distortion in Fox Medicine’s sound, Neezy writes everything on an acoustic guitar, and often works in creative bursts. ‘It’s a lot like I’m building a bunch of houses at the same time, so I’m in the house working on it, painting it and waiting for the picture to become clear. So I’ll all of a sudden have five songs that are complete. Once they’re done, then I’ll be like ‘Yo, Vanny, I’ve got five new songs!’ Then it’s a learning process for him to try to find fitting drum beats.’

For the latest album, the batch of songs had been written a year prior, and the band’s first long player had been initially penned to include more songs. ‘We do a lot of weird noisy keyboard on stage and originally it was going to be this huge album, but then I decided that I wanted to press it on vinyl. So then we cut all the fat, we cut all the intros out, it’ll just be the bare songs so that it could fit on the record, which sadly we didn’t end up [pressing],’ said Neezy. Despite this hiccup, Greetings from Mars remains a stellar collection of songs that stands up much taller than it’s short tracklisting. For fans of their debut EP Based on Need, the album offers a continuation of their edgy dialogue, only with a much larger sound, levelling up from their previous efforts in recording. For the newly-converted, the record provides an exciting showcase of the potential from this duo who are only two years young into their partnership.

With Greetings from Mars fresh off the press, Fox Medicine is already itching for their next recording project. ‘Right now, I’ve got the second album, which should have been [Greeting from Mars’s] companion,’ Neezy reveals. ‘We’ve been working hard and practicing it. I think probably in March we’ll start recording.’ To accompany the release of Greetings from Mars, Neezy mentions a busy schedule of local shows booked and plans to tour Europe. Maybe one day, even a trip to the red planet itself would be on the horizon for this noisy rock duo.

Michelle La is a freelance writer based in Melbourne, Australia. She is the Editor of Cat Brain Land, a music blog that loves new and alternative music from Asia and Australia.
RELATED ARTICLES
featuresfox medicineglitter alien