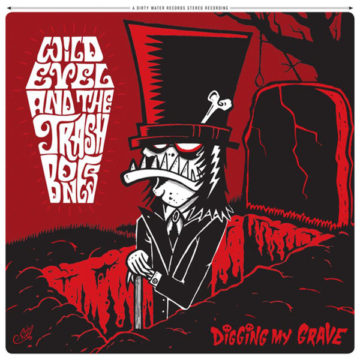 To the mainstream public, punk rock was a style of music birthed in 1976 by The Sex Pistols after a seemingly outrageous live television interview. To those who were actually listening, however, knew that the sounds that punk rockers like The Sex Pistols and The Clash, or their American counterparts The Ramones were playing wasn’t anything new, but was in fact something that had been developing for over a decade. Early elements could be heard in the music from The Kinks, The Who, and The Doors in the early/mid 1960’s and once again at the turn of the decade in both the growing glam scene being pioneered by David Bowie and The New York Dolls, as well as the art rock of The Velvet Underground and those closest to punk, The Stooges. Since 1976, however, punk rock has strayed dramatically from its origins, entering a number of phases that are nearly unrecognizable in comparison. It is with this notion that Wild Evel – vocalist from The Staggers – decided to get together with members of The Roadrunners to form Wild Evel And The Trashbones. Their second full length record, Digging My Grave is a testament to such a style, giving the band the appeal of a lost treasure from over fifty years ago.

Opening with “Der Bucklige”, an instrumental track that sounds like surf rock over-driven with thrashing drums and an equally fuzzy and crunchy distorted guitar, Wild Evel And The Trashbones waste no time in paying homage to their roots of American garage rock and proto-punk music. The following song and title track provides a heavier and darker setting while Evel makes his vocal debut on the album, howling and screaming with a throaty and gravelly voice reminiscent to that of Alice Cooper. What makes Dinning My Grave such an interesting listening experience is the versatility across the album; while at times Evel and the Trashbones can be the dirtiest punk rockers on this side of The Stooges, songs like “300 Pounds” with its driving synth line closely resemble to experimentation of The Doors, whereas “The Mess I’m In” and the harmonica driven “Fried Chicken Legs” feels nostalgic to the early rock numbers from The Rolling Stones circa “19th Nervous Breakdown”. While this all fits seamlessly together across the thirteen songs on Digging My Grave, it adds a sense of variety that is often absent from punk records and further develops a rich identity stepped in history for Wild Evel And The Trashbones.

Aside from the vintage vibe that is overflowing throughout the album, what truly makes Digging My Grave an exciting album is its raw sense of energy. Whatever it is, it feels as if all four members of the band recorded the entire record live in the studio. There is a sense that they are playing off of each other and an organic feeling of instruments bleeding into one another. This only contributes to the band’s punk identity as well as their vintage sound due to the way that records were cut in the 1950’s and 60’s. Regardless if this is true or not, it makes for a compelling and thrilling effect.

All in all, Wild Evel And The Trashbones’ second outing with a full length album is an absolutely success. Had I not known better, I would have assumed that this was a lost treasure from the 1960’s and would have championed them among the earliest pioneers of punk rock. Rather, Wild Evel And The Trashbones stand as visionaries for their revival of such a forgotten and often overlooked chapter of rock & roll in a fashion that is both respectful and true to the time, while also feeling slightly revolutionary to hear in 2017.

A passion for music has always been a part of Gerrod’s life. As a young boy, he was raised on a steady diet of the music from The Chili Peppers, Aerosmith, The Stones, Prince, and others from his mum. Raised in the GTA, Gerrod continued to foster his love for music by attending a wide range of concerts and learning the drums. His unapologetic passion for music has no bounds and has spread to a wide variety of styles, whether it be the 90’s rock that sound tracked his teenage years, the jazz he studied in university, or his newfound love for hip-hop. He recently received his bachelors in music and education from York University and is passionate about writing and reviewing good (and less than good) music. Gerrod is also the drummer and songwriter for a Toronto based rock & roll band, One In The Chamber.
RELATED ARTICLES
album reviewsdigging my gravedirty water records
9.0