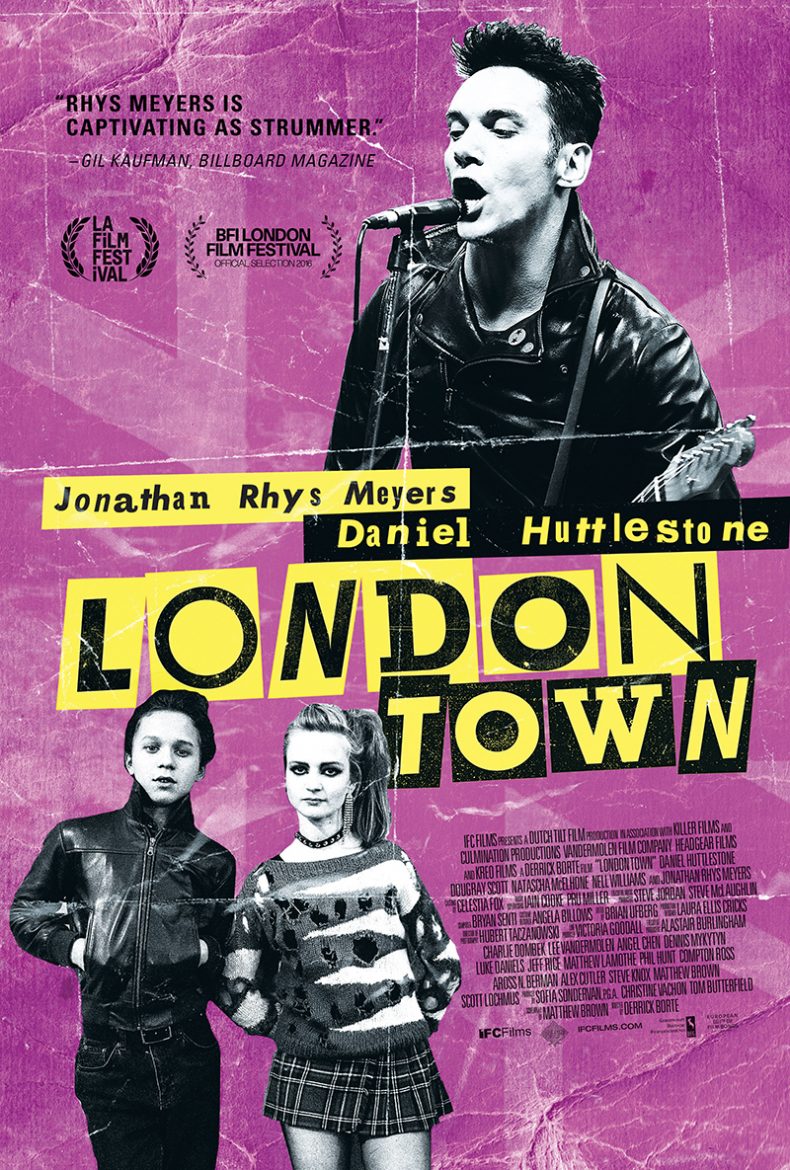 AN INTERVIEW WITH DIRECTOR DERRICK BORTE

On The Clash as an influence: “within the first few minutes I just had a realization that was the music that I was supposed to listen to”

Artists include The Clash, The Stranglers, Stiff Little Fingers, Buzzcocks, and Toots and the Maytals. Film stars include Daniel Huttlestone, Dougray Scott, Natascha McElhone and Jonathan Rhys Meyers. London, 1979: Amid political and social upheaval a 15-year-old hears the music of The Clash for the first time, and it opens up a new world of social consciousness, anti-establishment defiance and first love. Derrick Borte’s London Town is a revealing and entertaining look at teenage life, love and rebellion at the dawn of Thatcher’s Britain.

The late 1970s and early 1980s were a time of great political and social upheaval in the UK and, as is often the case, it was fertile ground for musicians. The music of the era echoed the turmoil and excitement in the streets and London Town brings those times to life. I think directors can only be viewed in terms of the work they’ve already done . Most directors are magpies or, if you like, ” artisans .” They will suit their style of storytelling to the subject they’re investigating. 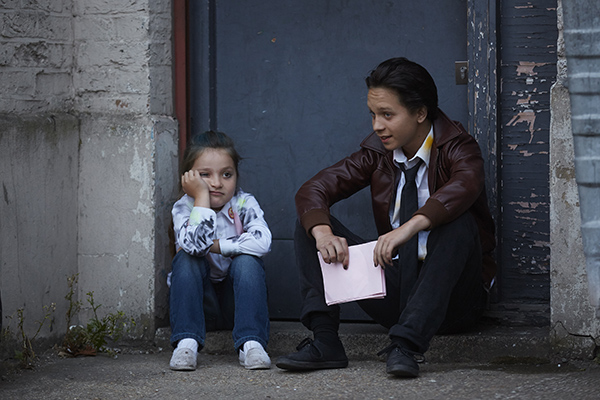 The time span of the film was also a time of growing up for me personally; it was a period that formulated my youth. Viewing London Town presented a step back through the years to the sights, political events, and primarily the songs I grew up with. I was curious why an American director had chosen this era and a time of upheaval in another country to form the structure of his latest movie. Did the events of that period in the UK really have such a significant effect and impact on those growing up across the pond in the States, I mused.

Derek explained that when he was at junior high school at 14 years old a couple of friends had given him the first The Clash album, and, “within the first few minutes I just had a realization that was the music that I was supposed to listen to.”Why, though, had he decided to make London the basis of his movie ? What was the primary objective behind his movie, what was he trying to get across to his audience? 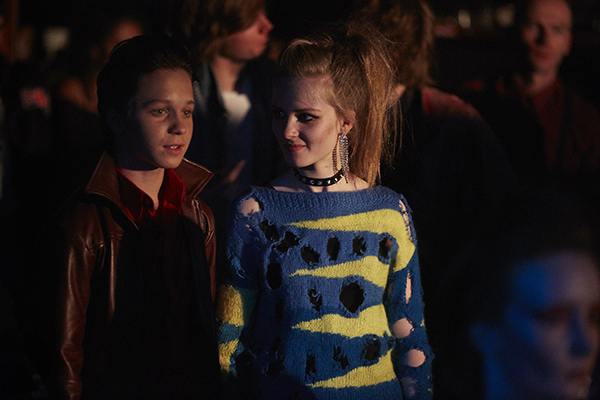 I often wondered while watching a movie what exactly did a director want me to take away from the viewing? More than just simplistic enjoyment on a basic level? I ask Derek if he had something else he wanted his audience to take from his movie.

As I mostly interview musicians I am always curious as to what and who has played an influential part of their own creation and development as an artist. Do film directors also have role models in their own style and learning in their developmental process? Obviously with these guys I’d want to know what music documentaries have influenced them. D. A. Pennebaker is the obvious big one. Shane Meadows did the The Stone Roses one I think because he just felt compelled to make it . My favourite documentaries on music are the Dylan one by D.A. Pennebaker but Meeting People Is Easy, the story of Radiohead touring OK Computer, is fascinating. Was there anything that had influenced his film making London Town or had Borte sought to make his own signature work?

“That’s really what it is about; the power of music to change your life.”

I was curious about the next part of the filmmaking process, from that initial idea to how directors went about the sourcing of actors for the movie. Derrick was happy to present an insight into his own methodology.

“I have a wonderful casting director in London. Her name is Celestia Fox, who I worked with for a number of years trying to put the perfect cast together with and she just came up with some amazing strong actors. From finding the kids, which was a very long process, to people like Tom Hughes who is just a spectacular up-and-coming very talented actor.” 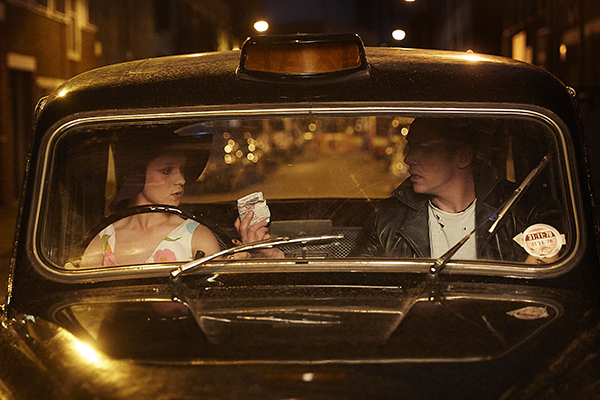 I felt that perhaps a director should have a personal degree of insight into the acting process in order to achieve the right performances. Did Derrick agree with my view or did he instead rely solely on his own casting director to get the correct chemistry for his film? He agreed and stated that actually knowing what an actor goes through and their own personal process was very important. It assisted by telling him how to speak to the actors and how to work with them.

The process of making films using digital technology always tends to polarise opinions among film directors. Some swear by it , others like Christopher Nolan regard it as an aberration. I was keen to identify which side of the argument Derrick supported and asked him which format of filmmaking he had utilised in the making of London Town. He explained that he had shot features in both formats — film and digital. Derrick believes there were several factors that played a part. The material itself was a small part, in addition to so many other things. For London Town he had chosen to shoot on the ALEXA ( a film-style digital motion picture camera system made by Arri first introduced in April 2010). He had worked with that format a lot. Some things it offered were of particular benefit, and he felt that it gave a beautiful look to the production. However, he did not favour one format over the other, preferring to take the view that both offered their own strengths. 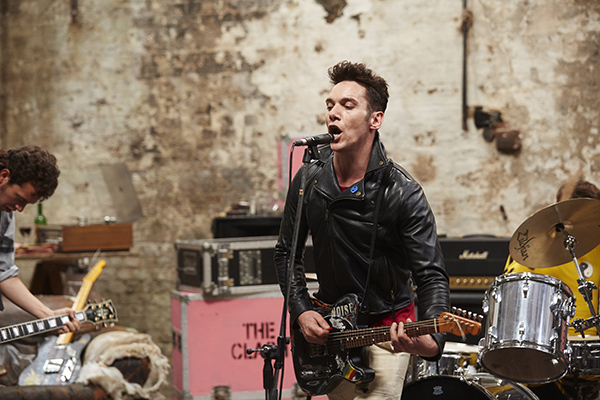 As London Town is essentially a music documentary, albeit told around a coming-of-age story-line, I was curious what part music played in Derrick’s life. Was he a collector, a fan, did it only serve as a background to his directed productions? He explained that as well as playing a part of his working life, it also formed a part of his non-working life. When he is script-writing, typically musical playlists are going around in his head at the same time on repeat. He believes that helped in setting the tone or head space for a particular project, in addition to being actively involved in the composition and music supervising on his directorial projects to help the music elevate the project. He believed that bad music can take a project down and that great music could take it up.

The premiere of London Town obviously would take place in the UK, but I wondered what was the long-term production aim for the film. Would it see a release to a worldwide market, or instead would its distribution be solely and exclusively for selected markets? He knew there was a company handling the U.S. distribution. There would additionally be a Rome premiere. He hopes that other countries would subsequently follow but does not have specific details on a wider distribution to an extended market and to allow other countries to see the film.

When I have interviewed other film directors I have found that they are rarely solely focused on a current project. They are always already looking ahead towards their next project. Laughing, Derrick confirmed that this was also the case with himself. ” I have a few projects coming up that I am working on. A TV series and I am doing a couple more films. Right now I am quite literally in ‘London Town’ and focusing on that.

Having lived through the sights, times, and sounds of the era, I had a direct personal connection with London Town. However, that is not an essential prerequisite for its viewing. It is a well-produced and entertaining production played out with a backdrop of great music.

I'm a 40 + music fan. Fond mostly of Rock and Metal my staple-musical food delights. Originally from Northern Ireland I am now based in the UK-Manchester. I have a hectic musical existence with regular shows and interviews. Been writing freelance for five years now with several international websites. Passionate about what I do I have been fortunate already to interview many of my all time musical heroes. My music passion was first created by seeing Status Quo at the tender age of 15. While I still am passionate about my Rock and Metal I have found that with age my taste has diversified so that now I am actually dipping into different musical genres and styles for the first time.
RELATED ARTICLES
buzzcocksfeaturesthe clash
8.0

by Aaron Badgley on April 29, 2022
Buzzcocks Senses Out Of Control Cherry Red Records Buzzcocks formed in 1976 when Pete Shelley and Howard Devoto formed the band in Manchester, having been influenced by the [...]