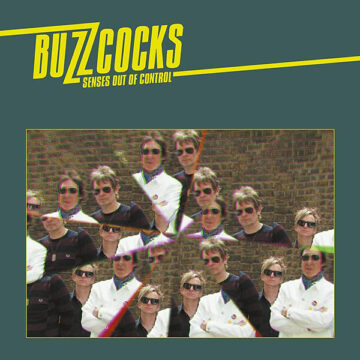 Buzzcocks formed in 1976 when Pete Shelley and Howard Devoto formed the band in Manchester, having been influenced by the erupting punk rock scene. After one EP (Spiral Scratch), Devoto left (and went on to form Magazine) and Steve Diggle was not  in the band. The core of Buzzcocks from this period on is really Shelley and Diggle. The band has split and reunited several times, but at the centre was Shelley and Diggle. Sadly, Shelley passed away in 2018, but Diggle promised to keep the band going. In 2020 Buzzcocks released their first studio recordings without Shelley (“Gotta Get Better”) and this year they are releasing a new EP as a taster for an upcoming album.

Senses Out Of Control opens the EP of the same name with a burst of energy. This is power pop or pop/punk at its finest. This song is pure Diggle. It features very powerful playing, strong guitar, and the hint of a pop melody. But it is pure energy, something he always brought to the band. However, what is missing is Shelley’s direct input, tempering the song and throwing in those curve balls that Shelley always managed to add.

However, the tempo of the EP changes with “Carnival of Illusion” , which pays homage to David Bowie. In fact the song sounds a little like Bowie’s “Look Back In Anger”, which with the power playing works rather well. The song features some clever lyrics about cancel culture and it is probably the strongest song in the set. It harkens back to the strong melodies that Shelley would bring to the table and it has a distinct Shelley influence.

The EP ends with “Hope Heaven Loves You”, which may be a tribute to Shelley. It is an interesting song with emotional lyrics and a rocking melody. It harkens back to the early 1980s sound of Buzzcocks and is a nice and suitable way to end the EP.

It is nice to have new music from Buzzcocks. However, it is somewhat bittersweet and as good as it is, Shelley is very much missed. Buzzcocks worked best with the interchange between Diggle and Shelley, and here it is simply missing. However, Senses Out Of Control is a great EP and it does make one curious as to what the band can do with an album length project. Hopefully, the wait will not be too long to hear that album. In the meantime, there is no doubt that fans will embrace this EP and enjoy the new music.