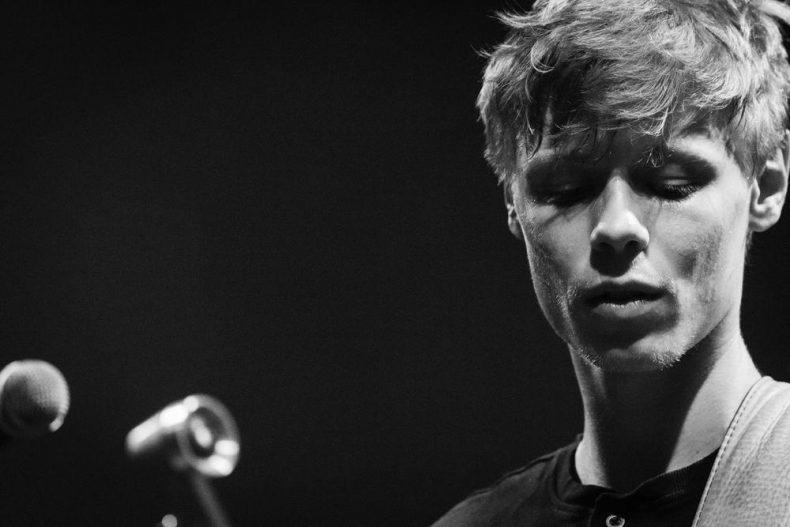 AN INTERVIEW WITH JESPER MUNK

The 23-year-old Danish-German heartthrob Jesper Munk is a musician who can’t be pigeonholed. He stands out with his wide variety of musical stylings of Modern Blues, Post-Punk, Folk and much more. We had the chance to interview him before his Toronto debut during Canadian Music Week.

Some initial pleasantries are exchanged. He immediately comes off as a nice, well-kept artist who tries to articulate well even with a bit of a language barrier. We begin with his initial roots in music where he began playing bass at 16. He recalls playing in his first band Lila’s Riot, which he has fond nostalgic memories of playing with, and the drummer of which is in his current band and he remains friends with other members of the group.

Rainer Germann, His father, was a musician from the New Wave band Cat Sun Flower and currently plays in his band. So music was always around him growing up but he didn’t want to do the same initial thing as his father. He was invited to play with various bands but was too shy to say he couldn’t play. However, once he entered the rehearsal space he never left. Growing up, a lot of Jesper’s inaugural musical tastes were derived from classics like The Beatles and The Rolling Stones but also influences of Punk, New Wave and Italian Folk. A mish-mash that he jokingly blames on his father but then states that music was the language spoken at home. 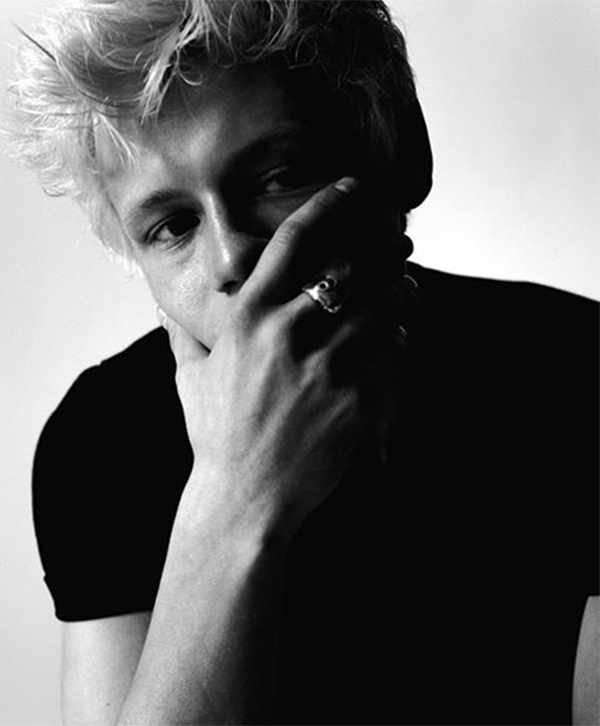 When he started his first band in which he played bass he said, “nobody could really play; we loved our instruments but couldn’t always say what we wanted to say with it, the technique wasn’t really there you know?” When asked what kind of music they tried to play, he replied with, “It was loud ‘60s weird stuff trying to invent something new.” He thinks back fondly as it was an awesome time for him musically, as nostalgic memories come back to him. “We started playing a lot of ‘60’s stuff then went on to learning where it had come from.” That’s where the initial roots of Rock ‘n’ Roll and Blues influence came from for them. That’s around the time he began writing songs on guitar by himself: around 17 or 18. He states, “I didn’t choose Blues specifically because of the sound but rather it was really fun to play, and getting to learn the soft touch of the instrument.” This began to come naturally as he progressed.  At 18 he stopped going to school and began to really concentrate on his music and began taking it seriously.

“I grew up with English music so there wasn’t really a connection with the German language and expressing yourself through music. It never really crossed my mind. We had a weird situation when we were looking for publishing; some publisher guy walks into the rehearsal room, we had invited two or three on different days, and when the publisher came, he walked into the room and he was like, ‘great, great, awesome!’ Then two days later I get an email. It says, ‘great! We’ll give you this amount of money and we’ll double it if you sing in German.’ He laughs. “So I think, ‘okay cool the guy likes my music but now do it completely different please, then it will really pay off.’”

He enjoys hearing love songs so he uses these themes of love placed over certain aesthetics such as vintage or old-timey sounds. Not being a fan of the more modern productions, he likes to maintain a much more homely sound to express himself artistically. “I’m not sure what the direct mechanism is.” This often gets turned into taking that same feeling as describing a certain story. As far as working with other respected artists in the field he seems eager and ambitious to work with many acts. He chuckles and describes how it would be an endless list. “It’s the best thing to work with people who can show you stuff; put your ego aside and really learn from them.” He lists a few artists like Jack White, Neil Young, Tom Waits, and Dan Alba, all people who he would love to work with and still looks up to, to this day. He says his musical sound changes a lot as well. “I’m experimenting all the time actually. I love to experiment.”

“On the songwriting part I’ve been finding new ways to get to it. I started with guitar, then writing lyrics. Then I turned it around then had tons of lyrics lying around and kind of puzzled them together while I wrote a riff. Now it’s more on the piano so I don’t know if I have a real mechanism. I’m just finding out my flow. I find that lyrics can define what kind of association genre you have in your head. Sometimes a complete Pop song with left-wing lyrics can sound a little Punk-Pop just because of the words. So it’s sad that you have to define it but on the other hand completely understandable.” He’s currently in the writing process for his third album, which he has stated is much more soulful with sensitive tones compared to his prior albums and is definitely not genre-bound. “It’s probably the first time now where I should know what I’m doing and there should be no excuses. It feels horrifying and beautiful. When putting things together the writing part is easier where compromises don’t have to be made yet. I think you have to learn to trust yourself a certain amount and definitely a bigger amount than the last time. As things move forward there’s more voices from the outside, suggestions here and there and you have to feel more natural about the decision, so it’s more in gut and you have to trust that.” 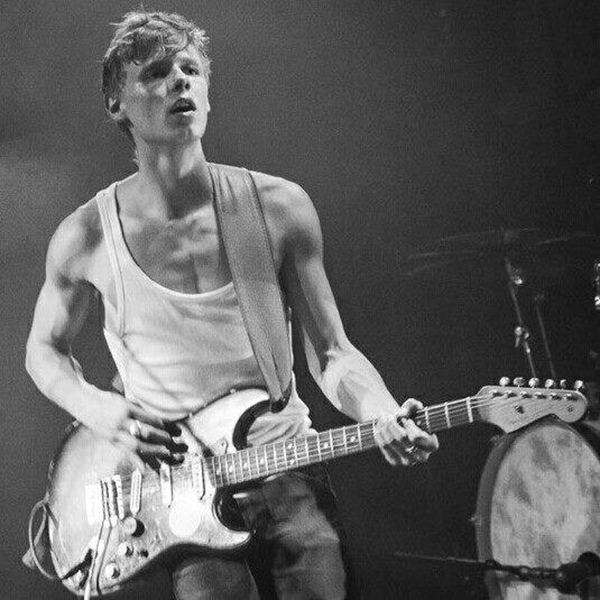 He has worked with some bigger names on the production of his last album Claim. “I learned far more than I would have learned in a week’s time if I wouldn’t have been around those people. Everything was very fast as far as the whole progression of the project. I have a huge fear of overseeing something, not seeing a lesson to learn or something like that. I didn’t get everything I could have learned staying with those people such as Jon Spencer or Mocky, and that’s why I went back to L.A. this year to sit down with Mocky and write and get a good feel what the album will sound like and what the possibilities are. He’s such a great teacher. I don’t think two years ago I could have gotten the whole lesson.”

Was the eclectic variation of the tracks on Claim initially intended or did they evolve into that final project? “The first thing I did on the last album was to go to L.A. for a week and write and record with Mocky. We just wanted to try it out. While I was there we found a way to produce with Jon Spencer as well. So I came back to Munich and recorded with a friend there myself. Then the last destination was New York so we had all these producer teams and in the end had to make a decision to make it one. But then be like, ‘it’s great, I like the songs but let’s go to L.A. for two weeks and record it with Mocky as a whole thing.’ In the end it felt right being different in itself. It had a lot of differences sound-wise and intention-wise. Sometimes the vocals are in the front or somewhere in the back; it made sense at that time and the year before was trenched in differences.”

“There’s definitely things happening but it’s barely scratching the surface; nobody thinks its cool. It’s so insane you don’t really see it happening or it’s little bars here and there in open mic session kind of things (referring to the German Indie/Blues music scene). They called me Blues-child. A stupid example but it’s because we don’t normally have it here. We always wanted to listen to that kind of music but didn’t have anywhere to go to see a live band play it.” Referring to a Netherlands music festival he played at he says, “there’s an interesting music scene happening there. A lot of interesting characters run around the streets of the Netherlands’ festivals and it was a nice time. It was different from the ones in Germany and I feel greedy for more outside-of-Germany gigs. I’m addicted to differences. I want to see more. We watched a lot of great bands at the Eurosonic Festival. You can see what’s happening in Europe for live bands. We saw a few live bands there that were so amazing and so pro and so alive. Such analogue – living things happening on stage and you can see why you need to go to the rehearsal room,” he jokes. 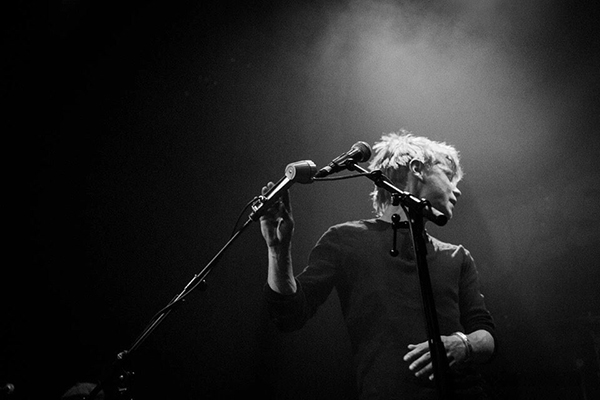 “I would love to have a night-liner, like a coach. Just a little one, just big enough so you can wake up in the morning and know that the next four hours aren’t just sitting in this fucking car chair not being able to sleep or anything. So that would be awesome, I like the road life, except the road,” he laughs.

“Depends on the evening. Sometimes going out on stage is like drinking half a bottle of whiskey. You have to lose some of the guards sometimes. It’s just me – I don’t have any showmanship or game on stage so it’s just me trying not to say too much shit and perform good. After a show I’m trying not to see every bar in the city. One good tip: one good bar then head back home for some tea with ginger. That’s the ideal, I think.”

“Try to find as many friends who have instruments and never stop looking for good music. Sit together and learn your craft before the whole thing goes too fast and you think you’re not a good guitarist or whatever. The biggest thing for me this year is being able to work on the new album. It’s a gift that is always around in my head. There’s also a few people from Munich where I come from that are making a documentary about being young musician and in Germany. Because of my extreme fear of acting I have this weird masochistic moment of where I agreed to be in this short film and now I don’t know how to handle it actually.” He laughs nervously “I’m sure it’ll be fun, I’ll probably post it on the Facebook page when it’s done or I acted so badly that I won’t and you’re never going to see it and I’ll hide it,” he laughs.