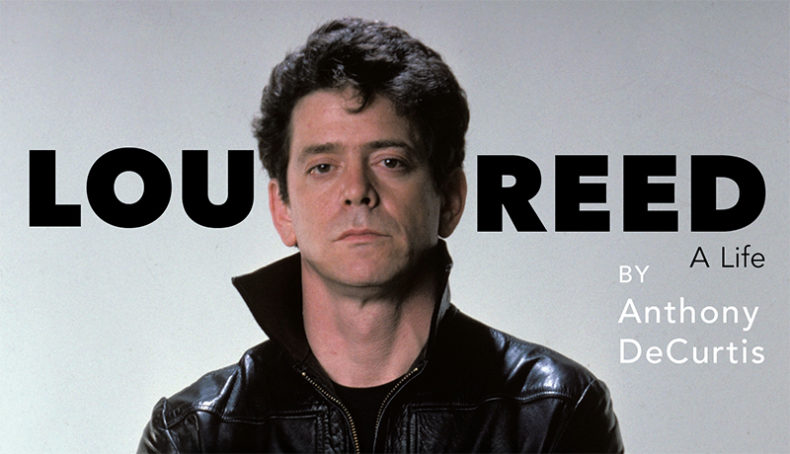 Where does one begin when writing a biography about Lou Reed? How can you compact a life so grand into 500 pages?

The legendary Anthony DeCurtis, perhaps best known for his work with Rolling Stone, has made a masterwork of what so many other rock critics may have botched. He brings the reader into the world of Lou Reed. As if we’re birds perched on a fence, we only get to see the “best of” his life while at the same time feeling as if we’ve seen the whole thing. From the decadent nights spent at CBGB to the quiet walks in Manhattan with his wife Laurie Anderson, we really get to know the real Reed.

Lou Reed: A Life gives us a rare glimpse of the life of such a private man. Reed, who rarely made public appearances or discussed his personal life, would most likely have mixed feelings about a work that delves into the often-dark and seamy back alleys of his life.

His early years, which Reed has rarely discussed, are represented here in a fair amount of detail. His Jewish roots in Brooklyn and suburban Long Island, his strained relationship with his parents and his early sexual experiences as a teen, both straight and gay, are all brought to life rather vividly here by DeCurtis.

In between extensive reviews of each album, beginning with The Velvet Underground & Nico and ending with the controversial Lulu, we see Lou Reed for who he really was: a sensitive and loving man, while in stark contrast one who could also be an incredibly selfish prick.

DeCurtis, who had known Reed since the ’90s, writes as a fly on the wall, almost as if he was there watching Reed all along.

Once when doing a public appearance, he was brought to tears by a fan who told him how much his album Magic and Loss meant to them. The album, one of Reed’s deepest work, was written about his mentor, songwriter Doc Pomus, while he was dying of cancer. The tough New York swag that Reed often hid behind is instantly shattered after reading about this public display of emotion.

But Reed could often be a shockingly hostile man, often tearing journalists to bits in his interviews. His hatred toward critic Lester Bangs is well-documented through a series of heated interviews between the two icons.

What is also depicted in Lou Reed: A Life is how quickly he could turn on his friends and fellow band members. If he was being showed up by someone else’s talent, they were cut. Reed couldn’t stand not to be the centre of attention. This being the main reason for the break-up of Velvet Underground, once Reed became threatened by co-founder John Cale, who became the first of many talented musicians to get the axe from him.

Reed’s drug and alcohol abuse which seemed to grip his life during the ’70s is a major theme in the book. His excessive behaviour, after all, is what helped to cause his death at age 71 from liver failure. His love of speed and bottom-shelf scotch was of legend.

His romantic life is also a predominant topic, with both women and men. His lengthy and quite public relationship with Rachel Humphreys, a transsexual who inspired many of the endearing songs on Cony Island Baby, is also a lengthy subject in the biography. Reed, a revolutionary figure not only in music but also in the LGBT community, giving a voice for those who were rejected from the mainstream American life at the time.

Lou Reed: A Life is what so many rock biographies aim to be but rarely are: gripping and edgy, while at the same time without even a faint hint of the cliché.

Purchase Lou Reed: A Life Via

As a child growing up in the suburbs, Ryan found music as a way to soothe his boredom. After first hearing AC/DC at the age of 10, he was hooked on music. Tracing its roots to the ‘50s, he became obsessed with Elvis, Buddy Holly and Chuck Berry. Somehow that led to grunge, then psych-rock, then jazz, etc. The list goes on and on and his collection of vinyl records continues to grow.
RELATED ARTICLES
bookslou reedthe velvet underground