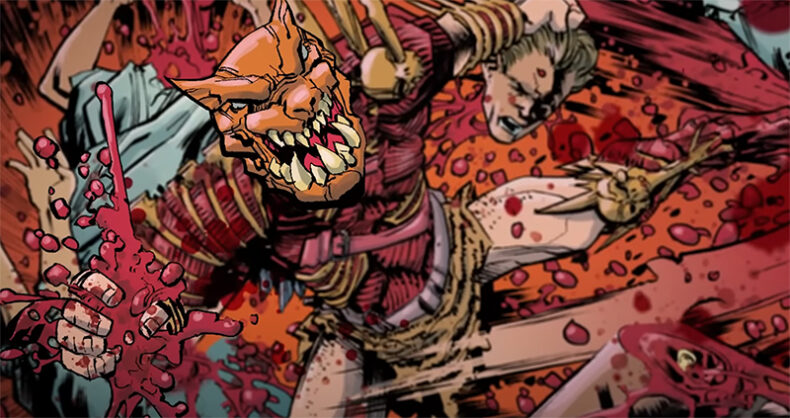 GWAR HAVE GONE BERSERK! CHECK OUT THE NEW SONG “BERSERKER MODE” OUT NOW

As the release date draws nearer, the mighty alien overlords of GWAR have unleashed the second track from their forthcoming masterpiece, The New Dark Ages. Watch the visualizer, and listen to the song “Berserker Mode” HERE.  The visualizer features the first animated art cells from the band’s upcoming graphic novel “GWAR In the Duoverse of Absurdity.”

Lead singer Blóthar had this to say about the song:

“This is my origin story, about transforming into a drug-jacked unpredictable liability on the battlefield. But like me, it has a softer side, a tale of the struggle of becoming my authentic self…a sexy, multi-donged, vajazzzled, Viking cow beast known as…The Berserker Blóthar!!”

Pre-order The New Dark Ages at https://gwar.net/collections/the-new-dark-ages.  The album will be released on CD/Digital June 3rd and Vinyl and Cassette September 16th via the band’s own “Pit Records.”

Listen to the first track released from the album, “Mother Fucking Liar!”.

The New Dark Ages chronicles GWAR’s adventures in the Duoverse, where the band rediscovers old powers such as Blóthar’s terrifying Berserker Mode, and encounter new allies, such as the murderous maven known as The Cutter. Along the way, they battle the living monuments of a lost cause and armies of undead soldiers who Rise Again to fight a New Civil War.

The album concept is tied to a companion graphic novel, “GWAR In the Duoverse of Absurdity,” which will also be released by Z2 Comics on June 3rd In the graphic novel the band are sucked off into an alternate universe to do battle with their evil twins and the specter of rogue technology.

In support of the album, GWAR will return to the road this Spring on “The Black Death Rager World Tour.” The tour starts this Thursday May 19th in Ft. Wayne, IN and runs through June 17th in Reading, PA.  Support will be provided by Goatwhore, The Native Howl and Nekrogoblikon.

Following the US leg of the tour, GWAR will return to Europe this Summer, including appearances at the Bloodstock and Wacken Open Air Festivals. Find a complete list of dates below.