Features
2
660
previous article
SPILL #CONTEST - WIN A PAIR OF TICKETS TO THE CANADIAN SONGWRITERS HALL OF FAME AWARDS AT MASSEY HALL ON SEPTEMBER 23!
next article
THE SCENE UNSEEN BY JAMES STEFANUK: SEPTEMBER 13, 2017 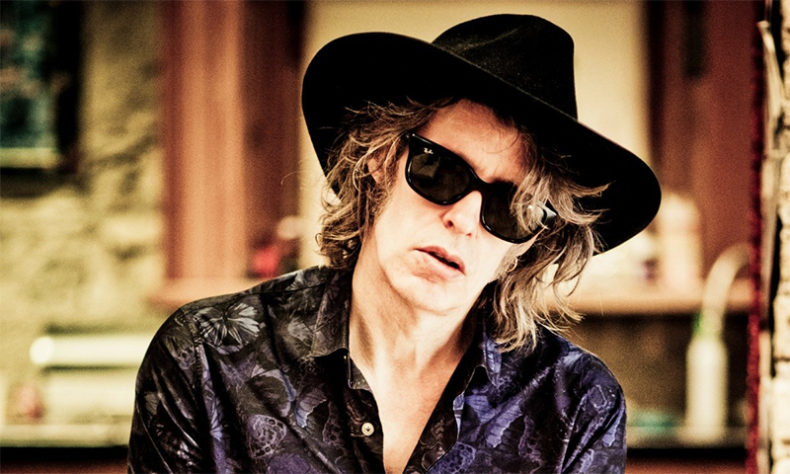 OUT OF ALL THIS BLUE

AN INTERVIEW WITH MIKE SCOTT OF THE WATERBOYS

The Waterboys have announced their brand new double album entitled Out Of All This Blue, available now via BMG. This is their first album since recently signing with BMG. In advance of the album, I had the chance to have a chat with the main Waterboy himself Mike Scott. As the release is a double album, was he now at a creative peak in his career where song-writing had become that much of a free-flowing process. Mike agreed stating that it was the most songs that he had written “in one burst for a long time” He also stated that he was very happy with the quality of the songs.

Reading the album’s cover notes I observed that it had been recorded in quite different and very diverse cities, Dublin and Tokyo. In terms of exploring Mike Scott’s songwriting methodology I wondered if the cities themselves had given birth to the songs-or were they already developed before he set foot in the two capitals. Mike attempted to explain to me how he operates .As he lives in Dublin most of the albums are recorded at his home and at a local studio. He did most of the writing in Dublin too. He also wrote a couple of songs in America while he was on tour.Nashville Tennessee for example.Some of the other songs “Didn’t we walk on water”and “Payo Payo Chin” were written in Tokyo.

In a modern age where many recording artists are moving away from corporate industries like record companies and self promoting or releasing music I asked Mike why he had decided to continue with that record label connection in the process and release it on BMG. He had previously brought out albums on his own label but he stated that “I’d rather let professionals do that, BMG know how to market a studio record really well.”

The selection of an album title always interests me, especially if it’s not obviously directly linked to a song on the album itself. The Out of all this  Blue heading on this particular release had a story attached as Mike explained to me.”It comes from a song of that name “Out Of All This Blue” which almost made it onto the album.” In the end he had decided to leave it off because although it’s a song that he likes a lot he didn’t actually get the right version recorded so he instead has saved it for the next record. He went on to elaborate, coming up with an interesting link. He referenced the Led Zeppelin album Houses of the Holy as an example of an album that actually had that songs appear on another album and not the one that it was titled. The Zeppelin reference surprised me as Mike himself is more well known as having originated from rather punkier musical roots. The Zeppelin link was further developed when Mike revealed to me that the album’s cover image where he is pictured grinning against trashcans was actually taken at the same building as the Zeppelin album cover for Physical Graffiti was photographed. Had the folkier elements of Zeppelin actually appealed to him personally-given the diverse musical range that the Waterboys had dipped into over the years? 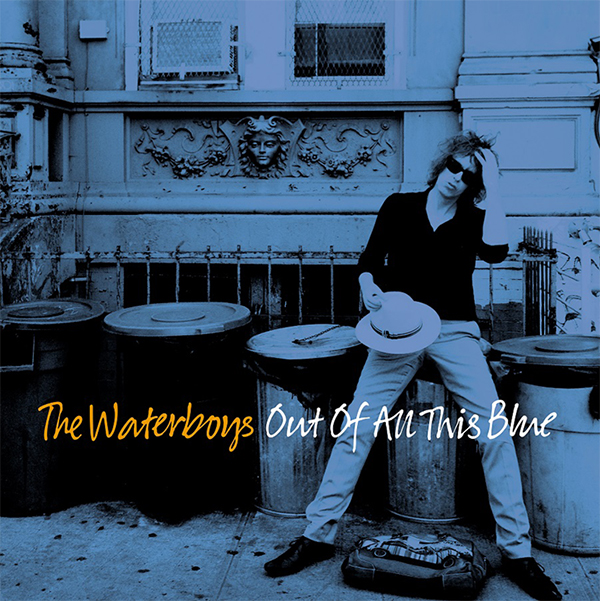 PURCHASE OUT OF ALL THIS BLUE

In doing my interview preparation I was actually quite surprised how long that the Waterboys had been creating music.I was curious if Mike Scott himself could identify any particular explanation for his thirty four years of his musical career. In changing times and after major upheavals in the music business they are still here and creating and performing music in 2017. Mike mused before sharing that he always tried to stay focused,following his instincts even if they proved to be not particularly fashionable at that time.”I think that’s kept me in touch with my musical heartbeat.” I also suggested that it could have been helped by the fact that the band were always difficult to categorize.They have always been evolving musically and not sticking just to the same musical template.

On the modern trend of streaming/downloads I tried to obtain Mike’s personal view of that aspect of the music industry today. I felt that he would be able to share some interesting views on what was directly and quite significantly impacting on the earnings of him and all other musicians currently trying to make a living in today’s climate. He however stated that he didn’t have particularly strong views on it. He just accepted it as “the way things are now”

Regarding his own musical career and legacy, how did he feel looking back on it. Did he view his career highlights as being in the past or instead on the horizon. He paused before stating that ”I think that this record is the best record I’ve made, so far, so I’ve had the highlight right now”. He went on to share his enthusiasm for the forthcoming tour to promote the release. He will have a nine piece band, two drummers and that was a big thrill for him. Looking back into the past he did pick out playing at the Glastonbury Festival in 1986. He also referenced making the Fisherman’s Blues album around the same period. Summing this up as “Those were good times.”

As he had spoken so positively regarding the forthcoming album how much of that release,in terms of material would actually be featured in that upcoming tour. Would the Waterboys be focusing primarily on that release? Obviously fans will always want to hear certain songs from his past. Mike stated that they will probably play about half of the new album live, maybe a dozen songs and that he had planned to introduce more as time goes on. He thought that a couple of them will come in later when the band do an American tour. Regarding the live band composition it would feature mostly musicians that had either played on the album or people that Mike had previously worked with at other times. The band will also feature two wonderful female singers Jess Kavanagh and Zeenie Summers both of whom sing on the new album. A second drummer will also be coming in and a new American guitarist. 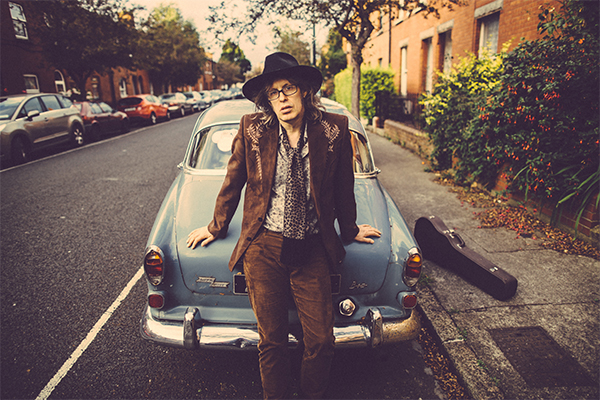 While Mike was discussing the band lineup I felt that it would be a suitable opportunity to refer to the ever changing,ever rotating Waterboys musical lineup. ”Yeah we have had more members than any other band” I was curious why that was actually the case, did he for example find it difficult to form long-standing work relationships or if it was simply a case that he got bored easily? Mike instead felt that it was more a case that when he had started the band his intention was always to have a band with an ever-changing line up, as he knew that the music would change.”I don’t find it difficult to make long-term relationships, I’ve had several very good and long ones, especially Steve Wickham who is with me now,we started playing together thirty two years ago.”

Mike Scott’s songs have referenced authors and writers who have made several appearances over the years .As Mike himself had written a book several years ago, ”Adventures of a Waterboy”, I was keen to know if he had any plans to reissue and update that. He stated that indeed a reissue was planned and is due to come out in November. It now goes up to 2002 with an alternative ending that he actually wrote.. It will also include some episodes that were written for the first ,original book but were not included.

Reviewing his musical career Mike was keen to explain that he always revisits his musical back catalogue when he is researching what material will be featured ahead of a new tour. His views of some of the old records change over the years. He gave an example of a song like “A Girl Called Johnny”, which was on the band’s first record and was a big hit in France. In 2011 he played at a Festival in France and he thought of playing that particular song They arrived, he taught it to the band and then they included in the set-list for that night. ”We played it,and I’ve played it at every show since,I absolutely love singing it.” He gave that as an example of a song that he doesn’t know why he didn’t like it before-and of how his own personal view regarding his music changes”

On the other hand how did he view playing other tracks, “The Whole of the Moon” or “Fisherman’s Blues” for example? Surely playing those tracks so often would impact negatively on his personal regard of those songs? Mike disagreed with me. ”No I never get fed up of,those, songs have great strong legs-just keep running”

In conclusion I was keen to identify how Mike personally viewed his own body of work..Had he fulfilled all his hopes, dreams and goals over the last thirty four years with the Waterboys? He explained that he still felt that he had something to prove on every record that he makes. He always wants to prove that he is as good as anyone in his generation and that he can take anyone on both as a songwriter and a band leader. He is still hungry to make what he considers are great songs, great records and great performances. ”I’m hungry, I’m competitive. I like to be better than anyone else” To that end he also revealed that he already has the next Waterboys record about three quarters finished”

Always working and eternally on the road the Waterboys will be playing Out of All This Blue at a venue near you soon. A masterclass in songwriting awaits you. Snap up those tickets while you have the chance.

I'm a 40 + music fan. Fond mostly of Rock and Metal my staple-musical food delights. Originally from Northern Ireland I am now based in the UK-Manchester. I have a hectic musical existence with regular shows and interviews. Been writing freelance for five years now with several international websites. Passionate about what I do I have been fortunate already to interview many of my all time musical heroes. My music passion was first created by seeing Status Quo at the tender age of 15. While I still am passionate about my Rock and Metal I have found that with age my taste has diversified so that now I am actually dipping into different musical genres and styles for the first time.
RELATED ARTICLES
bmg recordingsfeatures
8.0