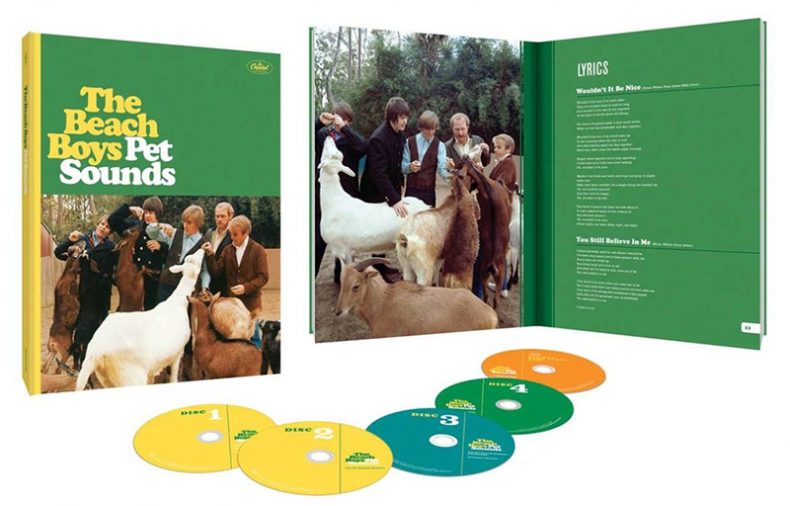 A RETROSPECTIVE LOOK AT THE ICONIC BEACH BOYS ALBUM

Prior to 1966, The Beach Boys were still seen as a ‘boy-band.’ Though their songs had slowly matured over the past four years, no one would have expected them to produce something as prolific as Pet Sounds, an album that broke the boundaries of what you could do with pop music. With the exception of The Beatles, it was miles ahead of what other bands were producing. Its themes seemed to tie together and the songs flowed seamlessly into one another, yet they still sounded completely unique. In this respect it is fair to call Pet Sounds one of the first concept albums in rock. Its ‘wall of sound’ production successfully combined Bach with a Phil Spector production. In one giant step they went from “California Girls” to “God Only Knows.”

July 1964 marked a serious turning point for the Beach Boys. Their leader and musical mastermind, Brian Wilson, had matured greatly as a songwriter. Their songs were to no longer deal with surfing, girls on beaches or hot-rodding.  Their lyrics matured, becoming more reflective of Wilson’s state of mind and growing anxiety. Musically The Beach Boys would change, as well. Their Chuck Berry/Surf-Rock-inspired guitar licks were also thrown out the window. Wilson instead took inspiration from The Beatles and, more importantly, Phil Spector, whose “wall of sound” approach to producing is evident on every The Beach Boys LP post-1965. 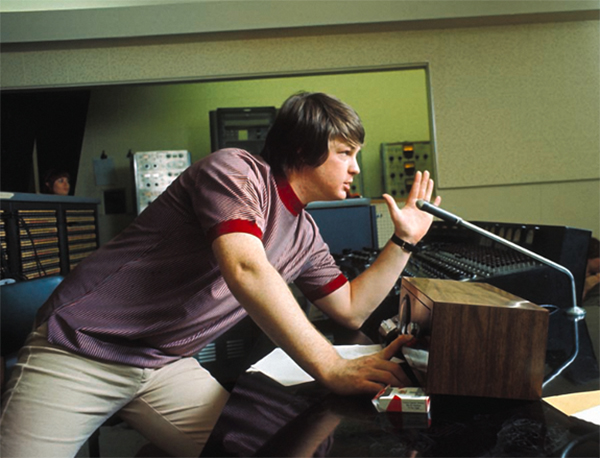 BRIAN WILSON IN THE STUDIO

But as Wilson’s creative genius was beginning to flourish, his mental state slowly began to diminish. In December 1964, the 22-year-old suffered a major anxiety attack on a plane after a live performance.

After the airplane episode, The Beach Boys worked out a new formula: Wilson would stay home and compose the music, while the rest of the group went out on the road. Wilson now had as much time as he wanted to channel ever-growing genius. The band released three albums in 1965, all of which showed Wilson’s growing ability as a composer and producer.

In the summer of 1965, Wilson began experimenting with psychedelic drugs and began writing songs under the influence. Marijuana, hashish and LSD were to be a major inspiration for the songwriter over next few years.

That fall, while The Beach Boys were on tour, Wilson teamed up with lyricist Tony Asher and began composing what would become Pet Sounds. Prior to composing the album, Wilson heard The Beatles’ latest album, Rubber Soul, which marked a noticeable difference in the band’s lyrics and sound. Its was a collection of songs that related to one another, rather than just a few hit singles and some filler material, which was the norm for albums at that time. This inspired Wilson so much that he set out to make an even better album. 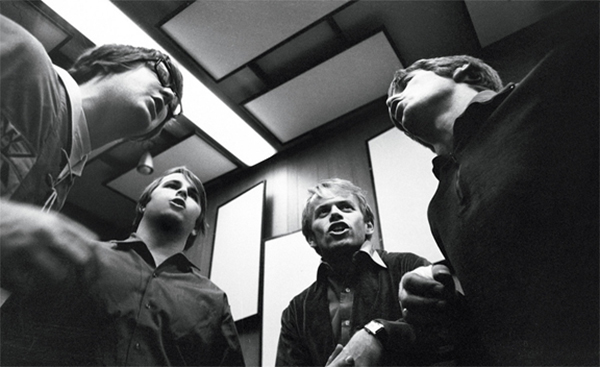 “With Pet Sounds I wanted to write some songs about how I really felt about life. Something that I felt in my soul, rather than just car songs, surf songs. Something more introspective, like taking a good look at yourself, see how you feel and see what you should do to improve yourself. That was my way of coping with those kinds of things that come up in every man’s life,” Wilson would later say.

The songs that Asher and Wilson composed had taken Pop lyrics to a new dimension. Musically Wilson took inspiration from Classical, Folk and Avant-garde. Lyrically the album deals with many subjects, all of which were new to The Beach Boys. The agony of being a misunderstood artist is reflected on in “I Just Wasn’t Made for These Times,” a teenager’s longing to grow up in “Wouldn’t it Be Nice,” and the contemplation of life after death in the brilliant “God Only Knows.” While there is one cover song (“Sloop John B.”), it fits incredibly well with the rest of the material’s themes of anxious longing.

When the rest of the band returned from the tour, they were presented with their parts for the album. While Wilson’s brothers Carl (guitar) and Dennis (drums) were supportive of his new songs, frontman Mike Love and rhythm guitarist Al Jardine were skeptical. They wanted to keep milking the cow and play surfing songs as they felt that this new music would lose the band their core fan base. 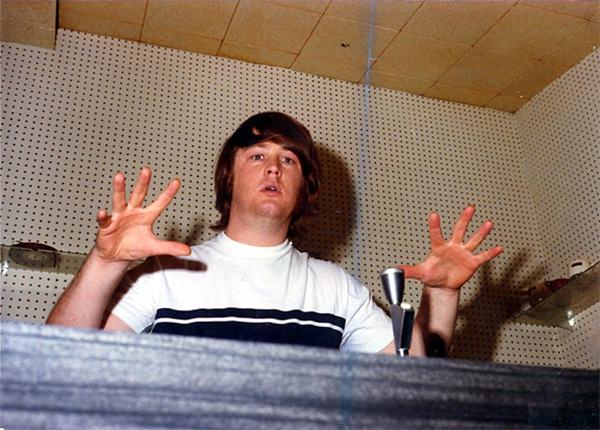 BRIAN WILSON IN THE STUDIO

The upcoming recording sessions were to be a drastic departure from their previous albums. The Pet Sounds sessions would feature session musicians instead of the actual band members, who would only provide vocals. Legendary studio musicians such as Hal Blaine and Carol Kaye, who played on Phil Spector albums, would sit in for the band.

In the studio, Wilson was an utter perfectionist, but was open to suggestions and often took advice from the studio musicians. Instruments as varied as the accordion, harpsichord, French horn, and even empty Coke cans were used for the recording sessions. Bringing classical and other unorthodox instruments into Pop music were the foundations of the psychedelic rock and baroque pop trends that would evolve in the late ‘60s. Wilson’s studio perfectionism during the Pet Sounds recording sessions was brought to the big screen in 2015 in the critically acclaimed film Love & Mercy, as portrayed by Paul Dano.

After nearly 10 months of recording, Wilson and company finally finished the album in April 1966. The production budget ran a total cost of $70, 000, an unheard of amount for the time. Needless to say, their label, Capitol Records, was not pleased. Nor were they pleased about the new songs that were presented to them. Capitol refused to release a single from the album, until months after its release.

“Brian delivered Pet Sounds and they said, ‘What is this shit? Pet what? Where’s the surfing music you idiot?,’” drummer Dennis Wilson recalled in 1977.

Pet Sounds was released on May 16, 1966 debuting at 106 on the Billboard charts. While it would peak at number 10, the album was far less commercial than their previous releases in the U.S. However, the album was highly successful in the U.K. where the album reached number two. 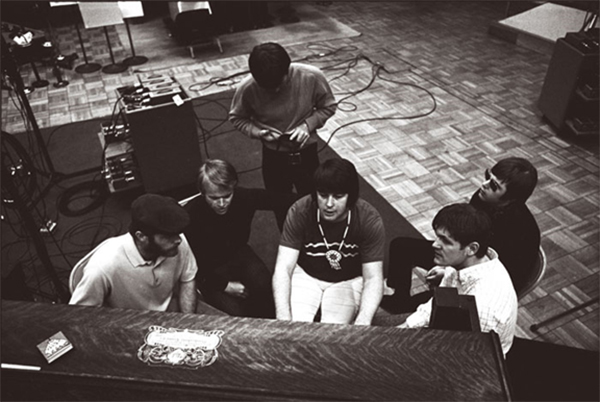 Along with The Beatles, Wilson had done something that no one else could have thought was possible: making pop music into an art form. While it may have not been commercial in its time, Pet Sounds is now revered as a triumph in pop music and usually makes top the 10 in nearly every “best album” list out there. Perhaps the best known is Rolling Stone’s “500 Greatest Albums of All Time” where it sits at number two, only beaten by Sgt. Pepper’s Lonely Hearts Club Band.

Upon hearing Pet Sounds, John Lennon and Paul McCartney took inspiration from Wilson’s songwriting genius and set out to challenge its greatness. The result would be Sgt. Pepper. Wilson’s use of classical instruments inspired the brass and string sections on The Beatles’ masterpiece.

“Without Pet Sounds, Sgt. Pepper never would have happened,” said The Beatles’ producer George Martin. “Pepper was an attempt to equal Pet Sounds.”

The album also was a big influence on Wilson’s brothers and fellow band members, Carl and Dennis, who would become prominent creative figures in the group in the late ‘60s and early ‘70s on albums like Friends and Sunflower.

Shortly after completing Pet Sounds, Wilson began collaborating with the avant-garde musician Van Dyke Parks, hoping to top not only Sgt. Pepper, but his own masterpiece. These songs, which included “Surf’s Up,” “Heroes and Villains,” and the classic “Good Vibrations” were, according to Wilson, meant to be “a teenage symphony to God,” and would be released as SMiLE. Unfortunately these prolific sessions came to a halt in May 1967 when Wilson’s drug abuse caused him to suffer a mental breakdown, which would take him years to recover from. While the songs were subsequently released on later The Beach Boys albums, they would not be released together, as intended, until 2011. Many critics believe that had it been released in 1967 it would have surely challenged Sgt. Pepper’s greatness; even John Lennon’s son Sean has said that he prefers SMiLE. While these pop gems may show Wilson at his creative peak they could not have happened without Pet Sounds, The Beach Boys’ true masterpiece.

As a child growing up in the suburbs, Ryan found music as a way to soothe his boredom. After first hearing AC/DC at the age of 10, he was hooked on music. Tracing its roots to the ‘50s, he became obsessed with Elvis, Buddy Holly and Chuck Berry. Somehow that led to grunge, then psych-rock, then jazz, etc. The list goes on and on and his collection of vinyl records continues to grow.
RELATED ARTICLES
50th anniversarybrian wilsonfeatures

by Ryan Sagadore on November 6, 2017
FOREVER CHANGES – 50 YEARS LATER It’s fair to say that Sgt. Pepper’s Lonely Hearts Club Band was the album that defined the Summer of Love, and the whole spirit of pop music in [...]

by Ryan Sagadore on January 4, 2017
THE DOORS – 50th ANNIVERSARY The story of The Doors is almost as mystical as their music.  It is one of fate and legend. It begins on Venice Beach in the summer 1965. UCLA film graduate, [...]