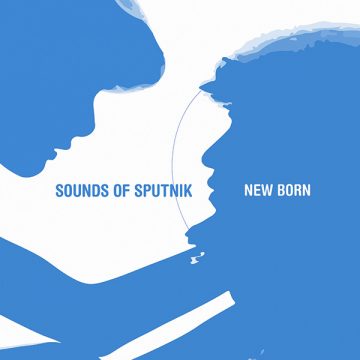 New Born, the debut album from Sounds of Sputnik, was reissued May 16 via Texas-based Moon Sounds Records. The album had previously been released through Ear to Ear Records in the U.K. and at the Sounds of Sputnik Bandcamp site. Roman Kalitkin, the Russian artist behind the music project, delivers a captivating set of tunes on New Born that melds the Electronic, Dream-Pop, and Noise-Rock genres.

Kalitkin collaborated with a slew of talented guest artists on New Born, developing an especially close association with the Canadian-Ukrainian Dream-Pop duo Ummagma.  Shauna McLarnon and Alexx Kretov of Ummagma worked with Kalitkin to create the heady blend of musical styles found on New Born and also provided vocals on several tracks.

Guest drummer Graham Bonnar (Swervedriver, Brian Jonestown Massacre) appears on “Overdrive,” while Malcolm Holmes (Orchestral Manoeuvres in the Dark), producer Fran Ashcroft (Damon Albarn, Lords of Acid), Russian producers Morozov and Oleg Mezherovsky, and Brazil’s Mind Movies each had a hand in specific remixes that are included on the album.

The sound and lyrics (written by McLarnon) of New Born reflect upon the hope of a better world where borders and barriers come down and what unites humanity is more powerful than what divides it. Kalitkin, McLarnon, and Kretov have all experienced the oppression and red tape of autocratic governmental control, and their struggles inform New Born’s songs.

Opening number “New Born” features McLarnon singing steadfastly and positively, “We’re waking up inside / No longer afraid / …Aim our light outside,” amid contemplative piano notes, lowering guitar jags, and cymbals that tap and shimmer. She carves out breathy sighs between her words as the piano notes dance through unspooling electric guitar distortion.

“Light Scheme” dazzles with quickly hit piano note refrains, buzzing guitars, and McLarnon and Kretov’s traded off vocal lines. McLarnon’s airy tone bounces off of Kretov’s shadowy register as they patiently draw out their words, singing optimistically, “I can see the road before me / Door’s wide open…”  They are accompanied by guitar lines that curve gloriously skyward and a rapidly accelerating drum beat.

Kalitkin’s instrumental “Blizzard” is filled with slowly resonating acoustic guitar strings that are progressively overlaid with the busy electronic patter of symphonic strings and the smolder of crackling electric guitar lines. The result is a warming effect that belies the song’s title. A refreshing cascade of reverberating synths closes the track, simulating the crystalline twinkle of falling snowflakes.

Kalitkin’s stark, The Church-like (with a touch of My Bloody Valentine at times) instrumental “Shades of the Cosmos” follows, steering through with a highly distorted bass line grind and a steady drum tattoo. Occasional cymbal crash, see-sawing strings, and a second, more reflective guitar line, round out the sonics.

Ponderous, low-register strings start off the delightful “Overdrive” before an upbeat tempo kicks in and McLarnon materializes, singing in sweetly light, Liz Fraser-like fashion that, “…now the time is right / …got to slow things down / Put a brake on problems old…” Guitar lines that alternately sound like chimes or lasers zip by, while Bonnar’s propulsive drumming and cymbals scintillation push the song forward.

On “New Born (Malcolm Holmes’ OMD Remix),” Holmes reconfigures the original song by adding a tranquil, expansive ambience of spacey synth notes and a slowed-down pace. He separates the instruments and McLarnon’s vocals from each other so that they each stand out on their own. Mezherovsky crafts “New Born (Oleg Mezherovsky Remix)” into an alluringly unfurling dance floor number that steps up the tempo and mixes in deeper synth notes, a livelier rhythm, and the pull of bittersweet strings.  Morozov brings in a house element to “New Born (Morozov Remix)”, focusing on prominent piano notes and blending in a lightly skittering tribal rhythm.  He uses loops of McLarnon’s wistfully aching sighs as an accent to the already instrumentally bustling number.

The Spill Magazine is a Toronto-based online publication dedicated to covering the independent music scene with a strong focus on our thriving hometown talent. Our writers bring you up-to-date news, in-depth features on musicians and reviews for the latest CD releases. We also travel to the front lines for all local festivals including Canadian Music Week and North by Northeast. Don’t forget to check out our Facebook and Twitter pages for all daily Spill updates.
RELATED ARTICLES
album reviewsmoon sounds recordsummagma
9.0