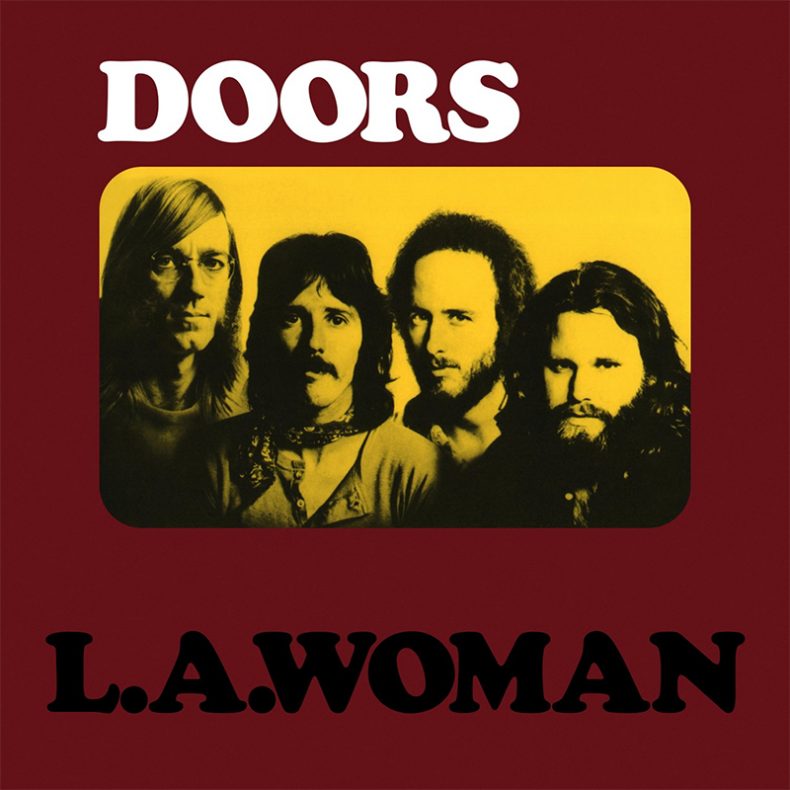 At the end of the 1960s, The Doors were seemingly running out of gas.

Their first two LPs were both critical and commercial darlings, however the two follow-ups were not nearly as good.  Despite 1968’s Waiting for the Sun being their only number one album, many considered it to be lackluster. Not surprisingly, it was comprised of leftover songs that didn’t make the cut on their previous releases.

The following year they released their fourth LP, The Soft Parade, which was met with even harsher reviews. Critics scoffed at the horn sections and strings comparing it to elevator music, while fans seemed to be equally confused.

‘No one even thinks about The Doors any more—such is fame,’ wrote Robert Christgau in his review for the Village Voice. ‘This is an acceptable record, with predictable pretensions and two or three first-rate songs.’

All fingers were pointed at their lead singer and primary lyricist, Jim Morrison, who had by 1969 had developed a severe problem with alcohol. When the band formed four years prior, Morrison was primarily using LSD to explore his consciousness and there seemed to be no end to his creativity. When he replaced psychedelics with booze, his magic seemed to be slipping. Initially he was perceived as rock and roll’s answer to William Blake, but at the dawn of the ‘70s he was bloated, tired, and considered passé by the public.

The fuel that lit the Doors fire seemed to be dying. 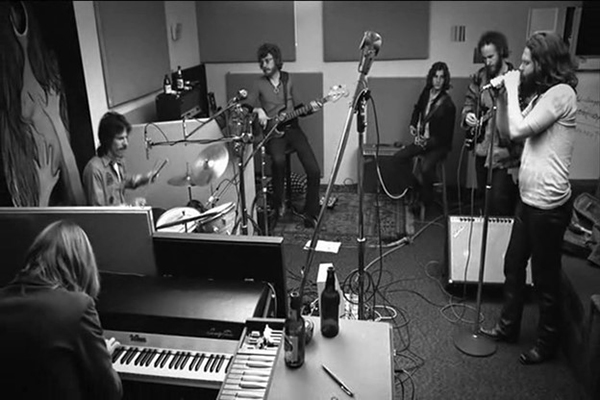 In February 1970, the Doors had had enough. They dropped their fifth studio effort Morrison Hotel which was comprised mostly of blues and roots-based rock. Both the music-buying public and the critics were thrilled by the raunchy “Roadhouse Blues” and quirky funk of “Peace Frog”. ‘It features jagged barrelhouse piano, fierce guitar, and one of the most convincing raunchy vocals Jim Morrison has ever recorded,’ wrote Lester Bangs on “Roadhouse Blues”. ‘This angry hard rock is that at which the Doors have always excelled, and given us so seldom, and this track is one of their very best ever.’

In November, the Doors began rehearsal at Sunset Sound with longtime producer Paul A. Rothschild in hopes to take their blues-focused rock to the next level.

‘We had one last album to go [in the contract with Elektra Records] and this could be our last,’ remembered keyboardist Ray Manzarek in 2011. ‘We’re going to make the album at this Zen moment in time. We didn’t discuss the future. ‘The future’s uncertain and the end is always near.’’

While hopes were high for the Doors, their producer was not impressed by what he heard during those early sessions. He felt disconnected with the group and compared their new track, “Riders On The Storm” to “cocktail music”. It was clear the two parties needed to go separate ways.

The band recruited Bruce Botnik, who had engineered all five albums, as their producer. Rather than record in the stuffy studio environment, they moved the recording gear to their rehearsal space known as the Workshop located at 8512 Santa Monica Boulevard.

‘It was the room we had rehearsed in forever,’ said drummer John Densmore. ‘Our music was seeped into the wall, so it was very comfortable. It was home.’ 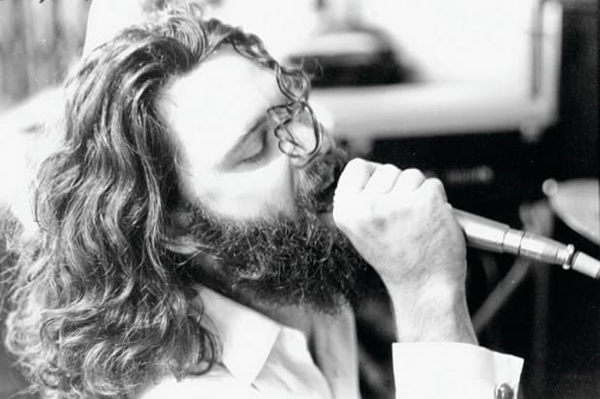 Additional musicians were also brought in to for the sessions to give the record a live concert feel. Rhythm guitarist Marc Benno was recruited along with Elvis Presley’s bassist Jerry Scheff to add more bottom end to the sound. Morrison was particularly excited to have Scheff onboard as he grew up idolizing Elvis.

Morrison once again seemed to be interested in making music and his passion is obvious on L.A. Woman. While he continued to drink in the studio, the dynamic the group conjured up kept him involved in the recording process long enough to lay down some truly amazing material.

The first song the lineup recorded was “The Changeling” which ended up as the first track on the finished album. The funk-based track kicked everything off and set the scene for the stripped-down vibe the Doors had hoped and seemed to be achieving. Placed perfectly at the beginning of L.A. Woman, the line ‘I’m leaving town on the midnight train’ was a hint of Morrison’s upcoming departure to Paris.

While Robby Krieger’s “Love Her Madly” was the obvious single, the centerpiece was the title track. “L.A. Woman” is a goodbye letter and ode to the city that Jim Morrison loved so much. The song was a neo-noir reflection of the seamy side of Los Angeles that appealed to Morrison’s inner Raymond Chandler.

As the song slows down in the middle breakdown, the singer sensually repeats the line ‘Mister Mojo Risin’, an anagram of his own name. The term “mojo”, originally a charm or amulet of African origin, was often sung about by blues artists referring to their libido or sexuality. Drummer John Densmore felt they should slowly increase the tempo of the breakdown like a metaphorical orgasm. One couldn’t imagine the song without this saucy ingredient.

“The WASP (Texas Radio And The Big Beat)” was a track The Doors had written several years before, however it was more of a template for Morrison to perform spoken word in concert. It was now the perfect time to record this  song with its references to blues giving birth to rock music. 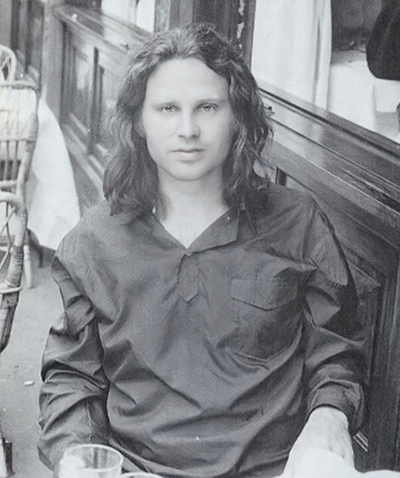 Since their debut, the Doors had made a tradition of ending their albums with extended epics. “The End” on their self-titled LP, “When the Music’s Over” on Strange Days and the title track on The Soft Parade are all around the 10-minute mark. On L.A. Woman, it is the haunting “Riders on the Storm”.

Born out of the western song “Ghost Riders In The Sky”, the Doors added an element of mystery with Manzarek’s eerie organ runs and Morrison’s depiction of a murderous hitchhiker. It is the perfect ending to a near perfect collection of songs.

During the mixing, Morrison announced to the group that he was planning to leave for Paris and to resign from the Doors. The group was stunned. They had just finished recording their best work since 1967 and their primary lyricist and frontman was quitting.

Morrison was hoping to get out of depraved Los Angeles and to live as an exiled writer like his heroes Ernest Hemingway and Ezra Pound had done. Unfortunately, his problems followed him overseas. After living in Paris for only four months, Morrison died on July 3 of an alleged heart attack. He was 27.

L.A Woman was released on April 19, 1971 while Morrison was still alive in Paris. There would be no tour to support the album. The Doors’ final performance with their lead singer was in December of the previous year and considered to be one of their worst. Some even have claimed they saw Morrison’s spirit leave his body that night on stage.

The album received near universal praise from rock critics. Robert Christgau called it “the Doors’ greatest album” and considered it to be the best album of the year. In 2003, Rolling Stone ranked L.A. Woman 323 on the magazine’s The 500 Greatest Albums of All-Time.

While it is their eponymous debut that is still considered their finest work, it can be argued that L.A Woman is a close second. It is a swan song to one of the most important groups of the ‘60s. The Doors would continue as a three-piece for one more year, releasing two more albums. Neither were commercially successful. 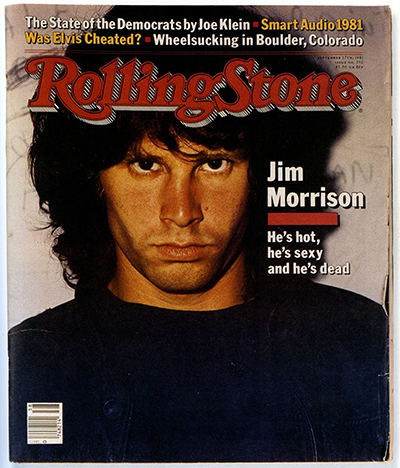 The legend of The Doors and Jim Morrison only grew in the years following. 10 years after the singer’s untimely death, he was featured on the cover of Rolling Stone with the headline “He’s Hot, He’s Sexy And He’s Dead.” Morrison, along with Brian Jones, Jimi Hendrix, and Janis Joplin had become icons of “The 27 Club”.

In 1991, filmmaker Oliver Stone brought the band to the big screen with his film, The Doors. While Val Kilmer’s portrayal of the Lizard King is considered to be historically inaccurate, it helped to cement Morrison’s “live fast, die young” appeal with youth culture.

Even now, 50 years later after the release of their final album together, it is hard to deny the impact of Morrison and The Doors’ impact on pop culture and music.

‘It represents to me a drive across the Great American South West,’  Manzarek spoke of L.A. Woman to Mojo in 1997. ‘Driving on the freeways and highways through the desert – Arizona or New Mexico – or driving up the coast of California on Highway 1, from LA to San Francisco. It’s alive, it’s free, it’s young and it’s wild.’

As a child growing up in the suburbs, Ryan found music as a way to soothe his boredom. After first hearing AC/DC at the age of 10, he was hooked on music. Tracing its roots to the ‘50s, he became obsessed with Elvis, Buddy Holly and Chuck Berry. Somehow that led to grunge, then psych-rock, then jazz, etc. The list goes on and on and his collection of vinyl records continues to grow.
RELATED ARTICLES
50th anniversaryfeaturesjim morrison

by Ryan Sagadore on November 6, 2017
FOREVER CHANGES – 50 YEARS LATER It’s fair to say that Sgt. Pepper’s Lonely Hearts Club Band was the album that defined the Summer of Love, and the whole spirit of pop music in [...]

by Ryan Sagadore on January 4, 2017
THE DOORS – 50th ANNIVERSARY The story of The Doors is almost as mystical as their music.  It is one of fate and legend. It begins on Venice Beach in the summer 1965. UCLA film graduate, [...]