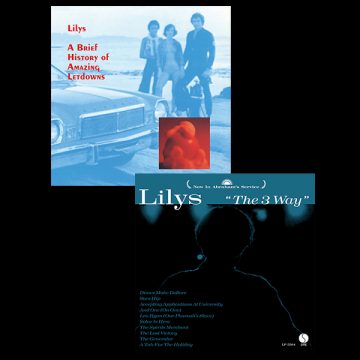 Shoegaze caught on, particularly in the British Isles in the early ‘90s, went down for a while and then returned in the new millennium with full force around the world. Of course, there were bands that dabbled with the genre but took their own individual paths developing their special marks, like My Bloody Valentine and Teenage Fan Club.

But there was one American band that immediately picked up the shoegaze trend on its own path along the way. Kurt Heasley and Lilys were able to come up with some landmarks of the genre. Sundazed has decided to pick up on this trend and reissue the two from different phases in their career – A Brief History of Amazing Letdowns (1993) and The 3 Way (1999).

A Brief History, the band’s second overall release, can be called the archetypal shoegaze as it is known today, but also brings along Heasley’s uncanny knack for a good melody and a guitar riff, that can rank among the best in the genre. Sundazed add four demos and one unreleased track to make it a full-fledged guitar extravaganza.

On the other hand, The 3 Way is Lilys and Heasley maturing, and at the same time showcasing elements of music that takes a look at rock history through their eyes. It sounds like Heasley’s re-interpretation of the seminal Nuggets’ compilation in 10 tracks. No additional ones here, but an amazing listen nonetheless.