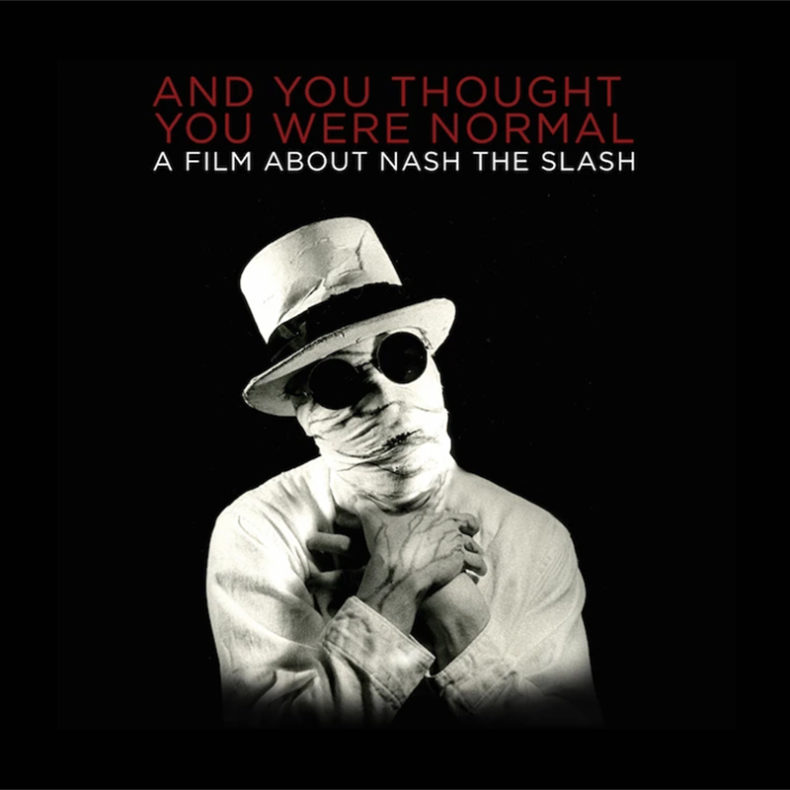 “Nash had a folklore to him. He was fine with it and he played it up, too. He was kind of like, ‘What you want to believe about me – it’s true. Whatever you want, I am.’ His bandages were like a blank canvas, and he used that to his advantage.”

As a kid growing up in the 1980s, Tim Kowalski watched the multi-instrumentalist, progressive rock/electronic music artist Nash the Slash on television. He remembers being fascinated by both the music, and the rumours about Nash, the ‘King of the Macabre’. The rumours were many. It was said that Nash lived in a movie theatre whose walls were covered with scary posters; that he had a stuffed crow; and that he revelled in the darkness and found solace there. The young Kowalski found that very appealing.

It is appropriate then, that Tim Kowalski now finds himself on the creative team as producer and co-director (with Kevan Byrne) of a documentary about the career of the late artist, called “And You Thought You were Normal”. Reflecting on the motivation behind creating their film, Kowalski says, “I got into his story after he died and got into his music, finding out that some of the stories about him were true. It was kind of more fantastic than when I heard it the first time. I always found him to be a very groundbreaking, fascinating character. So, yeah – he screams documentary! I got very lucky and I found other people of like mind on the internet, shortly after he died. We all got together, and this became this documentary.”

This film has been in the works since 2016, and Kowalski, Byrne and company have put a great deal of their time and money into it. This past January, they mounted an ambitious crowdfunding campaign in which, happily enough, they have exceeded their goal.

Now on their way towards a stretch goal of $40,000 in the same campaign, Kowalski gives credit to Jason Amm of Waveshaper Media, for crowdfunding guidance. “He’s been great. He’s been behind three successful campaigns for his films: the Subotnick film, there’s a Moog film (“Electronic Voyager”) with the daughter of Robert Moog, and they did a very famous film called “I Dream Of Wires”, which is about the modular synthesizer scene. They’re the go-to for eccentric synthesizer-type artists. We kind of fit under that umbrella, neatly. When Jason was watching us with our last attempt, he said, ‘Look, with your next go, I see a lot of potential here. Maybe I can help you.’ So, we took him up on it.”

Kowalski notes that the additional funds will enable the team to go to the U.S., to interview a few more important people for the film. “We’re at 114% now, in funds,” he says, “It’s been very encouraging. The support has been very overwhelming and quite humbling, to be honest about it. We’re in a good, strong position, and we’re just seeing if we can get some people to go the extra distance with us, and just check off a few more boxes. We want to build on the momentum that we have kind of worked up to this point. Every time we have had one person say ‘yes’, there’s always been, like, another five suggestions for people to talk to. And they’re all very interesting people. Let’s just say that Nash surrounded himself with people that had a little extra light around them.” 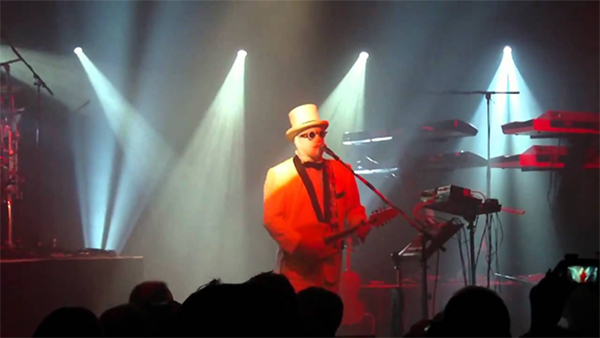 A greater budget at their disposal will afford more focused time toward the film’s completion. “The first thing is, our editor, Kevin, can take four months off from his day job, and actually work on this full-time. That’s massive, ’cause we’ve got close to a hundred hours of interview footage that we’ve amassed so far. And it’s still going, so that’s a big thing. Also, with licensing footage, stuff like ‘Un Chien Andalou’, which (Nash) scored early on. That’s how he kicked off his career and became Nash the Slash at those very first shows at the Roxy Theatre – he composed the soundtrack for the Dalí film, ‘Un Chien Andalou’. We’ve been working in the background, trying to get stuff like that. Of course we would love to get all of the great footage that he’s done on CITY-TV throughout the ‘80s. There’s stuff at CBC, there’s stuff at BBC, untold archival photographs – all this stuff!”

Kowalski and Byrne have encountered a number of surprises, when interviewing those who knew and worked with Nash. “Like his stage persona, there are more questions than answers sometimes. He came out publicly as being gay, shortly before he died. He kept that secret from a lot of people, throughout his life. There were some close friends who did know, but there were some people who did work with him who didn’t know. Gary Numan, for example. When we brought it up with him, he was completely taken aback. He was like, ‘No, I had no idea!’ He started laughing and said, ‘He just keeps on giving, doesn’t he?’”

Over the course of conducting fifty-plus interviews and assembling archival video and other materials, the journey has not all been smooth sailing.  Kowalski considers some of the difficulties that the team has faced, saying “I think, early on, just gaining the trust of some people who were close to Nash, took a while. For some people, it took a year, a year-and-a-half, before they would give us any time, really. I think there were a lot of people who were friends of Nash, who were very protective of his legacy, and they didn’t know who we were. A lot of us are new to this, and they just wanted to see if we were for real. I think the proof is in the pudding now, with the trailers we’ve put out. Our team has grown since we started. We have Colin Brunton on now, as our executive producer, which is huge! He’s a very close friend of Nash, has forty years experience in the film industry, and he has been such a benefit to the organization.”

Additionally, getting permission from Nash the Slash’s estate took some doing. Kowalski describes a process of about a year, where there was communication between the production team and Nash’s estate, and some legal matters to attend to. In the end, Kowalski says that Trevor Norris (who inherited Nash’s estate) “found that he could trust us. We made a good bond with him. He understands that we’re coming from a good, honest place, that we don’t have any ulterior motives. We just want to tell a good story about Nash. We just want to bring his story out to people who know about him and love him, and hopefully, to a whole new fan base – a whole new audience that don’t know Nash. But when they do know about him, they’re going to fall in love with him.”

As the clock ticks down to the end of the crowdfunding period, the team behind “And You Thought You Were Normal” are in a place where their film will soon be released. Once it is edited, they can shop it to distributors and festivals, to see who can help them take the film to the people. But will we hear Nash’s story above the noise of so many music documentaries out there? What sets this documentary apart from the others? Kowalski responds, saying, “It’s going to be about a true mystery man. I don’t know how else to put it. The thing with Nash is: his stage persona was a really good indicator of his life, and how he lived, day-to-day. He kept his friends separate, and was a different person to different people. It’s a story that can make you go on some paths that you wouldn’t expect.”

For more information about this film, and its crowdfunding campaign, visit the Indiegogo campaign page HERE.

Bryan Williston has been involved in music since he was a young child. A veteran singer, songwriter, and music educator, Bryan has enjoyed playing a multitude of musical genres in a variety of outfits, over the years. Bryan lives in Whitby, Ontario.
RELATED ARTICLES
and you thought you were normalfeaturesindiegogo