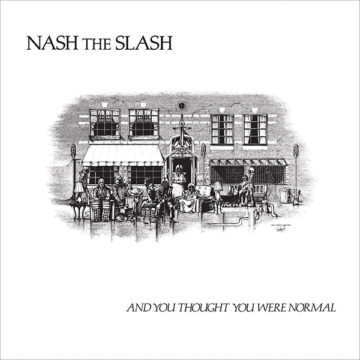 Nash The Slash
And You Thought You Were Normal
Artoffact Records

Originally released in 1982 as the follow-up to 1981’s Decomposing, Nash went a bit more commercial with this release. However, that aspect is not reflected with this reissue, and for fans just tipping their toes into Nash’s back catalog, it gets a bit confusing with this album.

The album was issued in 1982 as And You Thought You Were Normal, and although it had a worldwide release (Nash issued this album on his independent label, Cut-Throat, but licensed it to major labels around the world) it was not the success Nash had hoped. He even enlisted Daniel Lanois, fresh from his success with Martha and The Muffins to work on the album and produce the brilliant “Dance After Curfew”. The album was soon deleted and became somewhat difficult to find.

In 2002, Nash reissued the album with a different title, Normal, with a different running order of the songs as well as bonus tracks not found on the original album. Now, we have the 2017 reissue from the fine folks at Artoffact who have taken Nash’s Normal track order, added even more bonus material and returned the album to its original title. In restructuring the track order, the album no longer starts off with the more accessible “Citizen”, but goes right into the dark instrumental work.

The album is full of what Nash does best: moody, atmospheric music, full of odd lyrics about isolation, life, death, and everything else that fits into an Edgar Allan Poe poem. But on this album, there are some noted attempts to break into the mainstream. Listen to “Citizen” and “Dance After Curfew”: great dance songs. The latter even was released as a 12-inch remix.  Having said that, this is Nash’s idea of mainstream, which means while it is more accessible, it is far from pop.

The original album is not one of Nash’s strongest; the album is slightly inconsistent but still very interesting. Some of the songs don’t sound completely finished by Nash’s standards, and in fact he would return to Vincent’s Crows 10 years later and re-record a much superior version on his Thrash album. Some of the songs are just plain weird (like the wonderful soundscape “Animal Jamboree”) and some are remarkably sentimental (“such as the moving “Remember When”, which strikes into the reflective mood without so much as a word).

The bonus tracks themselves make purchasing the album worth it. The incredible “Lake Ontario Suite” is worth the price of admission. This music shows a different side to Nash that he saved for soundtrack work, but it is stunning in its simplicity.

As with their other Nash The Slash reissues, Artoffact have done a great job putting this album back together for today’s audience to appreciate the genius of Nash The Slash. They have restored the cover to its full glory (one of the most terrifying album covers I have ever seen) and the packaging is second to none. Nash would be proud and happy with the care this team has taken to restoring his catalog, and especially, And You Thought You Were Normal.

Born and raised in Whitby, Aaron discovered music through his love of The Beatles. This led to a career in radio, writing for various publications, and ultimately a radio show about The Beatles (Beatles Universe), which ran for over four years. When not immersed in music, Aaron enjoys spending time with the loves of his life -- his wife Andrea, and daughters Emily and Linda (all of whom have an intense love of music too).
RELATED ARTICLES
album reviewsand you thought you were normalartoffact records
7.0