WE ARE GIVING AWAY A PAIR OF TICKETS TO AN ARKELLS CONCERT IN YOUR HOMETOWN ON THEIR UPCOMING CANADIAN TOUR!

“It’s a weird time to be a rock band right now,” observes Max Kerman, the Arkells’ singer, guitarist, and chief songwriter. “And to be honest, I don’t really listen to a lot of rock music right now. I listen to Drake and Kanye. It would be so boring if we made a mid-2000s-style indie record. All those bands that I grew up with and shape the way I think about being in a band—the Cons, the Weakerthans, Wintersleep, Broken Social Scene—that’s not really what I listen to anymore. They’re in my DNA, but I just feel like rock has gotten so conservative and doesn’t know where to go. It’s just dull to me. Top 40 pop is way more progressive.”

Now, lest those comments suggest the Arkells’ new album, Morning Report, is loaded with bass drops and AutoTune, let us be clear: like the band’s previous releases, the record showcases the intuitive interaction between Kerman and Mike DeAngelis’ intertwining guitars, Nick Dika’s urgent basslines, Anthony Carone’s dulcet keys, and Tim Oxford’s lockstep drumming. But there is a more irreverent, adventurous ethos at play that reflects Kerman’s current musical interests—and that goes well beyond calling the first song “Drake’s Dad.” There are click-tracked rhythms, subliminal samples, electronic pulses, and sax and violins threaded into the richly textured mix, which more readily recalls the cut-and-paste approach of a hip-hop beatmaker than the plug-and-play impulsiveness of a live rock band.

Arkells’ preceding release, High Noon, was recorded with indie-pop architect Tony Hoffer (Beck, M83), a partnership that yielded their biggest radio singles to date in “Come to Light” and “Leather Jacket”. But while logic would suggest not messing with a winning formula, the Arkells only returned to Hoffer’s L.A. studio for one Morning Report track; another was recorded in the same city with producer Brian West (Sia, AWOLNATION), while the remaining cuts were split across two sessions in Toronto with alt-rock veteran Joe Chiccarelli (The Strokes, My Morning Jacket) and Gus van Go (The Stills, Wintersleep) 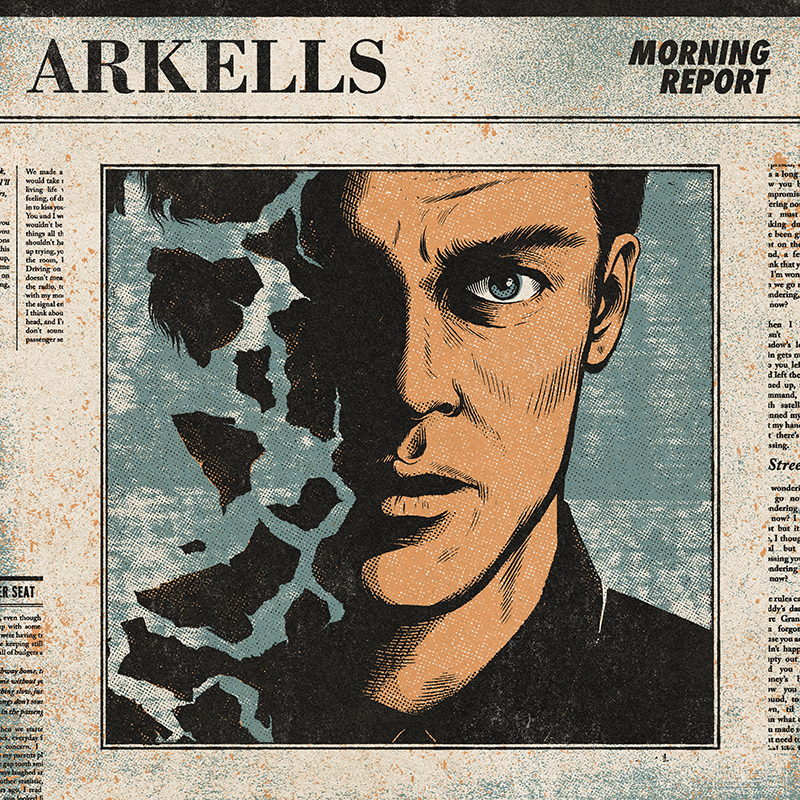 “I feel like some bands keep putting out the same record over and over again, because it’s comforting to keep working with the same people,” Kerman says. “But there are lots of talented producers out there, and everyone’s good at different things. Like, Tony Hoffer is at the top of the pile for synth stuff. But we also know Joe Chiccarelli gets wicked drum sounds. People think, ‘Oh, the record won’t sound as cohesive if you record it with different people.’ But hip-hop and pop artists get away with it all the time. Everybody in modern music is making music on airplanes!”

Certainly, Morning Report is the most Arkells’ eclectic album to date, from the piano-pounded, “California Love”-schooled swagger of “Private School” to the devastating, slow-burn ballad “Come Back Home” to the silver-lined break-up song “My Heart’s Always Yours,” the sort of ascendant, blood-pumping anthem you can easily imagine sparking an arena full of waving illuminated smartphones. But if the Arkells have mostly scrubbed away the surface soot of their Hamilton-spawned sound, lyrically, Kerman’s songwriting hits even closer to home.

“A lot of the songs are about me and characters in my life: my friends, my family, my girl,” Kerman says. “I find all those people really compelling and I like writing about them. And a lot of times, they’re songs about what happened the night before. So that’s why it’s called Morning Report: you text your friend the next day and it’s like, ‘Give me the morning report!’”

Sure, sometimes those dispatches concern tales of last night’s debauchery—the album’s bottle-popping opener, “Drake’s Dad,” is indeed based an actual (and rather inebriated) encounter with the elder Mr. Graham in a Memphis bar during an epic road-trip bachelor-party bender for Kerman’s friend. Or, in the case of “Private School,” they take the form of sly social satire, with Kerman recounting the experience of being stuck at a high-society party surrounded by well-meaning people who are totally oblivious to their privilege, and who name-drop books they’ve clearly never read in an attempt to seem more hip.

“I was kind of getting sick of indie rock being so self-serious,” Kerman says. “With ‘Drake’s Dad,’ I wanted to have a song about how much you love your friends and love getting drunk with them and getting up to trouble. There is a real magic to that. It’s hard, because when you’re a privileged white guy and you’re writing a song about getting drunk with your friends, you can sound like a frat boy, and I don’t like that either!” 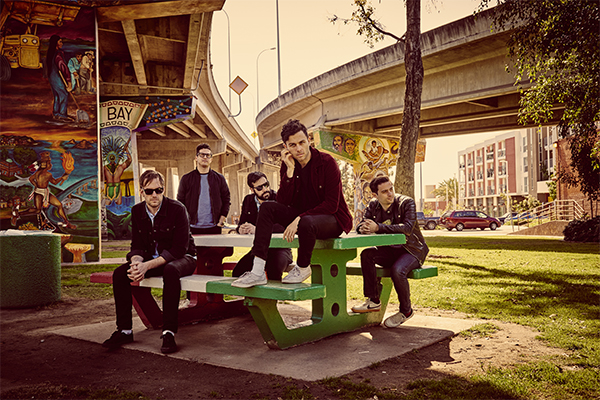 But Morning Report balances the champagne-room revelry with more sobering examinations of a time in life that doesn’t get much play in rock music: your late-twenties, that sometimes traumatic transitory moment where youthful exuberance gives way to mid-life crises. It’s the time when all your friends start getting married, your parents suddenly decide to get divorced, and long-distance relationships hit their shit-or-get-off-the-pot breaking point. But while melancholic, meditative moments like “Passenger Seat” and “Come Back Home” provide unflinching portraits of marriages on the brink of collapse, rousing, soul-powered sing-alongs like “A Little Rain” pay poignant tribute to the friendships that help you through the tough times, and provide that much-needed shoulder to cry on.

“That’s another thing that’s so conservative about white-guy indie rock,” says Kerman. “What makes Drake so awesome is he just puts all his emotions right on the table for you to see. All of these songs and stories come from a genuine place for me.”

The morning reports we get from our friends may arrive through smartphone screens, but the songs on Morning Report all chronicle face-to-face interactions—with all the intimacy, intensity and awkwardness they entail.

“This is our weirdest, funniest, saddest record yet,” Kerman concludes. “And therefore, our most honest one, too.”

SPILL NEWS strives to keep our readers up to date with news and events in the music industry. We keep you informed of the most recent information regarding new releases, tour dates, and information items about your favourite artists.
RELATED ARTICLES
arkellscalgarycontest