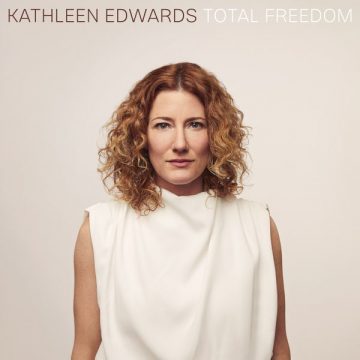 With her first release in over eight years, Ottawa singer-songwriter Kathleen Edwards has returned with musical tales about her career, good times, bad times, lovers, dogs, drinking, and her lengthy break from the music scene.  Kathleen’s much needed sabbatical clearly built up deep emotions that needed to be put to paper and song, where the end result is an incredibly well-crafted and tastefully-produced album that is sure to pick up major momentum and accolades in the months ahead.

The album’s opener, “Glenfern” is a memoir of gratifying times and old homes which Kathleen shared with former lovers. This intriguing anecdote includes lyrics such as “we had a tour bus with a bed in the back we bought a rock and roll dream it was total crap” making it hard not to instantly fall in love with the song’s personality. Musically, the track has a driving rhythm section with tasteful guitar leads along with that very familiar It Factor that Edwards always brings to the table with her songwriting and lyrics.

As the tracks play on, the listener has much to unpack with the album’s introspective lyrics and candor where musically it holds its own amidst song variety ranging from upbeat folk rock singles to dreamy emotional ballads. “Birds On A Feeder” is definitely one of the highlights of the album. This song steps away from its upbeat predecessors and alternatively features elegant classical finger picking, some autoharp, and delicate layers of piano. Edwards delivers this song with an angelic voice that will melt your heart on the spot.

After several spins of the record, the tracks start to sink in and a dark horse emerges, “Simple Math”, a wondrous tune about love, with smart lyrics backed by a four on the floor halftime beat complimented by the tasteful sounds of pedal steel and revered guitars. The chorus sings “I’m just one and you’re one and we’re two together/I’m ok being friends forever” and is one of the many powerful hooks on this album that keep things interesting at every turn.

The album certainly hits a peak with its main single “Options Open”, an incredibly catchy tune that describes Edwards at 39-years-old, something she would like to hold on to for as long as possible. The catchy chorus repeats the line “for 39 years, I’ve been keeping my options open”, followed by the super catchy hook of pedal steel and guitar played in unison. This track could be a legitimate Canadian classic, especially with the CanCon inside joke of “Crappy Tire” making a lyrical appearance early in the song.

Some alluring instrumentation can be found in the song ‘Fool’s Ride’; it’s extremely rich in musical layers, percussive background shots and well-crafted lyrics of post love grievances. The words outline some serious emotional stingers talking about an ex who took her for the emotional and financial ride of her life. This is one of the best songs on the album with its laid-back half-time drums, to the atmospheric keys and misty vocals. The song is vocally impeccable and a serious standout with yet another incredibly catchy chorus.

“Ashes to Ashes” includes intense lyrics such as “the world isn’t flat, god is not in the clouds” a tune of heavy memories about loved pets that have passed on. This song highlights the range in Edward’s writing styles and musical vocabulary. It is deeply emotional with a ghostly banjo reminiscent of Toronto’s Great Lake Swimmers.

With decorated producers and performers such as Jim Bryson and Ian Fitchuk at the helm of this brilliant release, it’s no wonder that the music is easy on the ears and something the audience will completely fall in love with. Not only does Kathleen Edwards have an enviable way with songs, she also has a unique talent for casting the perfect musicians to appear on her recordings and with her perfectionist’s dedication to work tirelessly until all things are just right, Total Freedom comes away with a perfect score.

Andre has been writing for The Spill Magazine for over 12 years, dating back to the print days. His passion for music goes far beyond writing reviews for new music and live concerts, he is also an active musician and producer on the Canadian music scene. Having toured North America and Europe with various acts, he is no stranger to dedication and work ethic new bands must endure to make the grade in today's market; Andre always delivers perspective writing that is authentic and to the point. Mr. Skinner typically covers indie rock, grass roots, electronica and is our resident hard rock and heavy metal specialist. He is extremely selective on what bands he covers for articles and you can rest assured they are ALWAYS band to watch with something left of centre to offer.
RELATED ARTICLES
album reviewalbum reviewsdualtone records
8.0