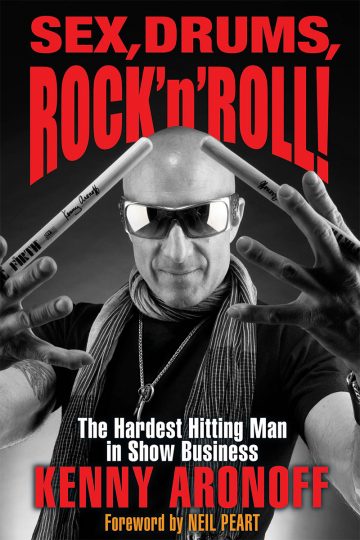 The “uncommon” story of how Kenny Aronoff, through hard work and unwavering principles, became one of the world’s most honored and in-demand drummers.

“Uncommon” is the name drummer Kenny Aronoff chose for his Los Angeles recording studio, and there could be no better word to describe the life and career of the man who, through boundless drive, creativity, and energy, has established himself as one of the most influential – and in-demand – drummers in the world.

Throughout his career of nearly four decades, Aronoff has recorded and toured with the biggest stars in every genre of music, including John Mellencamp, John Fogarty, Bob Seger, Ringo Starr, Willie Nelson, Johnny Cash, Melissa Etheridge, Gregg Allman, Alanis Morissette, Goo Goo Dolls, Joe Cocker, Sting, and many, many others. His unique sound can be heard on the #1 hits “Jack and Diane,” “Hurts So Good,” “Pink Houses (Ain’t That America),” and “Small Town” by John Mellencamp; “Blaze of Glory” by Jon Bon Jovi; and “Heaven is a Place on Earth” by Belinda Carlisle.  In all, records Aronoff has played on total over 300 million in sales, with more than 1,300 having been RIAA-certified Gold, Platinum, or Diamond. And he shows no signs of slowing down!

How has he done it? How has Aronoff become the session drummer every major music mogul keeps on speed dial? How has he built and fostered relationships with such a diverse array of performers?  In short, how did he become “uncommon”?

In Sex, Drums, Rock ’n’ Roll! The Hardest Hitting Man in Show Business , Aronoff answers these questions and more, painting the portrait of an artist, instructor, and businessman who never followed the norm, always followed his heart, and never settled for anything short of excellence.

“Staying the course” has never been enough for Aronoff, who has consistently embraced his own uniqueness while charting his life’s path. This has included taking his music career into every genre imaginable and branching beyond the stage and studio to build a second career as a business speaker. When addressing groups, Aronoff shares his experiences climbing the ladder in the music business and distills them into fundamentals, including hard work, self-discipline, and teamwork, that are applicable to any business setting or endeavor.

From his Los Angeles recording studio to the world’s most famous arenas, Aronoff has stuck to these principles and staked a claim as one of Rolling Stone’s “100 Greatest Drummers of All Time,” explaining, “I’ll never be as great as I want to be, but I’m willing to spend the rest of my life trying to be as great as I can be.”

Sex, Drums, Rock ’n’ Roll!, with a foreword by Rush drummer Neil Peart, and researched and developed with Jake Brown, takes readers on Aronoff’s amazing journey from the small New England town where he watched the Beatles perform on The Ed Sullivan Show in 1964 to performing alongside Paul and Ringo on a television special 50 years later. Along the way it chronicles an uncommon career in which the excesses of the rock ’n’ roll life are always tempered by his core personal and professional values.

Kenny Aronoff is one of the most famous and hardest working rock ‘n’ roll drummers performing today. After four decades behind the kit playing with John Fogerty, John Mellencamp, Joe Cocker, Bob Dylan, Jon Bon Jovi, and many others, as house drummer for the Kennedy Center Honors, and alongside Paul McCartney and Ringo Starr on the Beatles CBS special The Night That Changed America, Aronoff is listed among Rolling Stonemagazine’s “100 Greatest Drummers of All Time” and remains one of the most in-demand live and session drummers in the music business working today. He lives in Los Angeles where he operates Uncommon Studios LA.

The Spill Magazine is a Toronto-based online publication dedicated to covering the independent music scene with a strong focus on our thriving hometown talent. Our writers bring you up-to-date news, in-depth features on musicians and reviews for the latest CD releases. We also travel to the front lines for all local festivals including Canadian Music Week and North by Northeast. Don’t forget to check out our Facebook and Twitter pages for all daily Spill updates.
RELATED ARTICLES
bob dylanbooksjoe cocker