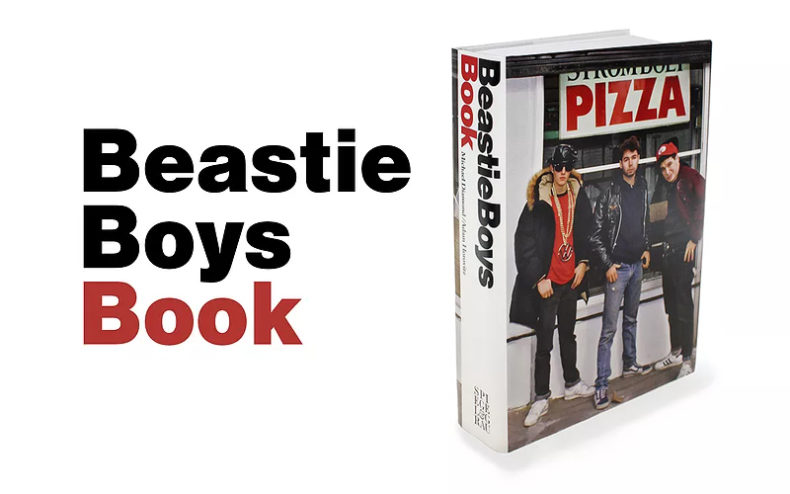 Now here’s a little story that has got to be told – actually, it’s a story over thirty years in the making and it’s not so little; it results in nearly 600 pages in length and includes a comic, cook book, and playlists. A book this absurd could only be The Beastie Boys Book. Written by Michael Diamond (Mike D) and Adam Horovitz (Ad-Rock), the book is a humorous adventure which looks at the legacy of one of hip-hop’s most experimental outfits, while also paying tribute to the one and only, Adam Yauch, MCA.

Beginning in their early years, Diamond and Horovitz take turns retelling the events which turned three New York punks to among the biggest of early hip-hop innovators. There are stories of watching a then unknown Black Flag in a club, opening for Bad Brains at Max’s Kansas City, and listening to the early tapes for License To Ill in the back of DJ Run’s (RUN DMC) car. There are stories which seem almost mundane of the three bad brothers we now know so well hanging out and shooting the shit, trading mix tapes, listening to records and such, and then there are stories of the extreme, like the time that The Butthole Surfers saved Horovitz and producer Rick Rubin’s life. There is plenty of material in here which contributes to not only the building momentum of The Beastie Boys, but also the friendship between Yauch, Horovitz, and Diamond, a friendship which was always a central aspect to their music.

While the innovation behind albums like their explosive debut, License To Ill and follow up records such as Paul’s Boutique, Check Your Head, and Ill Communication is not a matter of question; however, it was interesting to read how these records came about and the subtle and creative genius which fueled the band. This ranges from Yauch recording a drum loop, and flipping the tape upside down for the beat in “Paul Revere”, or the band’s choice to sample their own jams for Check Your Head or to create their own sound bites which sound like real samples (and then credit them to fake artists) on The Hot Sauce Committee Part Two. As a band, The Beastie Boys challenged all expectations with each record in means that may even surprise some of the biggest lifelong fans.

As far as books go, The Beastie Boys Book is one of the best I have read. In the cannon of musical memoirs, it stands at the level of that of Life (Keith Richards), Scar Tissue (Anthony Kiedis), and Slash. Not only is it a thorough examination of the evolution of hip-hop culture and their band, but it is also the funniest book I’ve ever read. Furthermore, it’s use of guest chapters from the likes of Mix Master Mike, Amy Poehler, and Spike Jonze among others only build on the depth and humor of the book. Without a doubt, The Beastie Boys Book is a thrilling book that you will struggle to put down and will have you blasting their music, along with their seemingly endless suggestions as they come up. This is a book overflowing with passion, nostalgia, and brotherly love that fans new and old will enjoy; after all, it’s THE BEASTIE BOYS!

Purchase The Beastie Boys Book Via

A passion for music has always been a part of Gerrod’s life. As a young boy, he was raised on a steady diet of the music from The Chili Peppers, Aerosmith, The Stones, Prince, and others from his mum. Raised in the GTA, Gerrod continued to foster his love for music by attending a wide range of concerts and learning the drums. His unapologetic passion for music has no bounds and has spread to a wide variety of styles, whether it be the 90’s rock that sound tracked his teenage years, the jazz he studied in university, or his newfound love for hip-hop. He recently received his bachelors in music and education from York University and is passionate about writing and reviewing good (and less than good) music. Gerrod is also the drummer and songwriter for a Toronto based rock & roll band, One In The Chamber.
RELATED ARTICLES
adam horovitzadam yauchbeastie boys
8.0