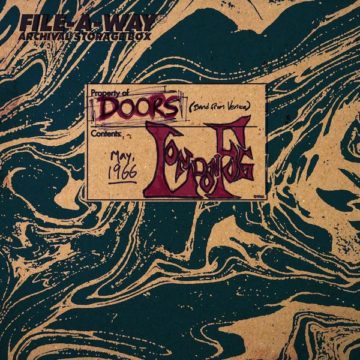 Nearly every band from the ‘60s and ‘70s has put out a compilation of  unreleased material.  Normally, it’s hard to see this as anything more than a cash grab from old bands with nothing new to offer the public. While the Doors have certainly released their fair of unnecessary posthumous live albums, they have also put out some interesting unreleased material over the years. Take 2011’s LA Woman: The Workshop Sessions, for instance. It invites the listener into the recording studio with the band, and makes you feel as if you’re witnessing the recording of their last great album. It may have been released purely for money, but there it still has artistic merit. The Doors’ newest release, London Fog 1966, has a similar effect on the listener, but this time taking you back to the band in its infancy.

What London Fog 1966 offers the listener is a raw, yet compelling live set at a very early Doors show. In other words, this album is a wet dream for hardcore Doors fans. It isn’t the earliest Doors music out there (their 1965 acetate demo has been online for some time), but this is pretty close to the beginning for the psych-rock legends.

Despite the poor sound quality, you can hear the band playing a tight set. The songs, mostly covers, are finely arranged and well calculated, albeit with some colourful flourishes from drummer John Densmore. In between the tracks we hear some banter between the group and some mild applause from what seems to be a very small crowd.

While original Doors tracks like “Strange Days” and “You Make Me Real” are incredible to hear in this early stage, it’s the Big Joe Williams cover, “Baby, Please Don’t Go” that is the album highlight. Morrison’s vocal performance is highly energetic here, as he urges the audience to dance, and guitarist Robby Krieger offers an exotic take on old blues licks. There aren’t any extended guitar or organ solos that the band would later be known for, but there is a certain charm to the simplicity of the band’s music at this stage.

As a child growing up in the suburbs, Ryan found music as a way to soothe his boredom. After first hearing AC/DC at the age of 10, he was hooked on music. Tracing its roots to the ‘50s, he became obsessed with Elvis, Buddy Holly and Chuck Berry. Somehow that led to grunge, then psych-rock, then jazz, etc. The list goes on and on and his collection of vinyl records continues to grow.
RELATED ARTICLES
album reviewsrhino recordsstrange days
8.0