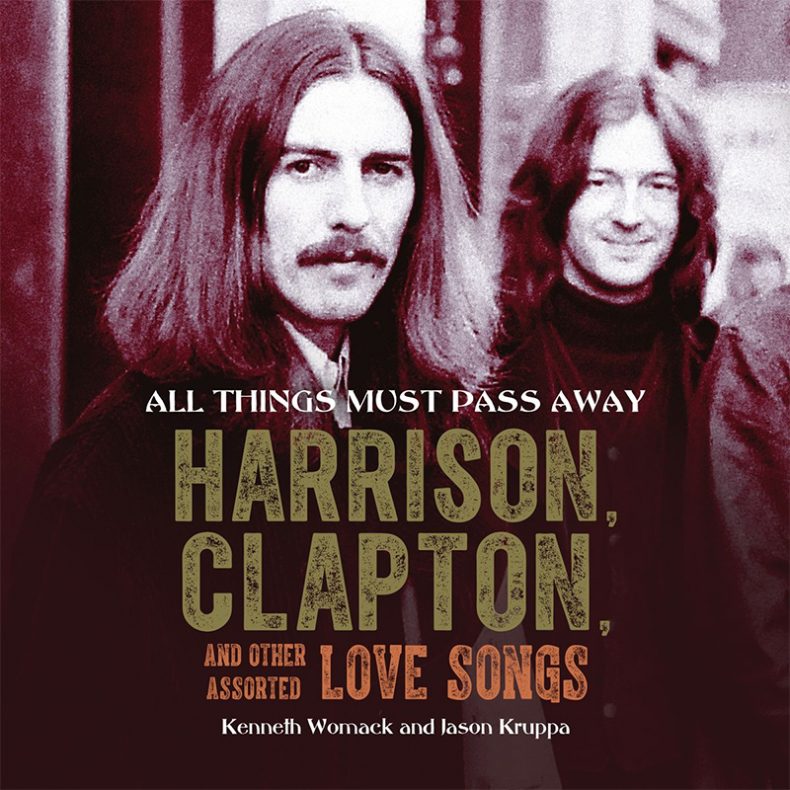 KENNETH WOMACK & JASON KRUPPA – ALL THINGS MUST PASS AWAY. HARRISON, CLAPTON, AND OTHER ASSORTED LOVE SONGS

Finding new topics about The Beatles, or even Eric Clapton for that matter, is becoming increasingly difficult. For All Things Must Pass Away. Harrison, Clapton, And Other Assorted Love Songs Kenneth Womack and Jason Kruppa have tapped into an area that Beatle and Clapton fans have talked about for years, and yet has not been documented into one convenient book. Of course, I am talking about George Harrison and Eric Clapton’s epic friendship that survived one of the two friends not only having an affair with the other’s wife but eventually marrying her.

Womack and Kruppa are no strangers to writing or talking about The Beatles. Kruppa hosts the successful podcast Producing The Beatles, while Womack is filling a library with his excellent books on The Beatles such as 2020’s John Lennon, 1980: The Final Years and his two part examination of George Martin . Here, the two have collaborated on a very and entertaining book, which examines the strong bond between George Harrison and Eric Clapton. The two became friends in the early 1960s and remained friends until Harrison’s passing. By the late 1960s, the two had become inseparable.

What is interesting in reading All Things Must Pass Away. Harrison, Clapton, And Other Assorted Love Songs is that there is a strong parallel between the two as they draw closer as friends. They have similar traits, and although they deal with their struggles differently, it is clear that once each had fame, fortune and notoriety, it brought all sorts of new problems. Perhaps the biggest issue for the two of them was their mutual love of Patti Boyd. Womack and Kruppa deal with this in a very sensitive manner and allow the main players to tell their own story through interviews and other sources. And their friendship not only survived this but thrived after the event, with Harrison as well as Paul McCartney and Ringo Starr not only attending Clapton and Boyd’s wedding, but performing at it as well.

The two authors also do an excellent job with the background stories and the aftermath. It is incredibly well-written and remarkably well documented. A great deal of time is devoted to the recording of two classic albums, including Harrison’s All Things Must Pass and Derek And The Dominos’ Layla And Other Assorted Love Songs.  The book is very readable and one finds oneself continually wanting to know what is going to happen, although fans already know the answer. That, in itself, is a testament to the writing style of the two.

Fans of both artists will want to read this book. Although, for my money, it could have been longer, as it is, it gives the reader a great deal of information and by bringing a number of source material together, they have created the definitive book on this subject. All Things Must Pass Away. Harrison, Clapton, And Other Assorted Love Songs is a brilliant read and a book that will sit comfortably on any Beatle (or Clapton) bookshelf.

Purchase All Things Must Pass Away. Harrison, Clapton, And Other Assorted Love Songs Via

Born and raised in Whitby, Aaron discovered music through his love of The Beatles. This led to a career in radio, writing for various publications, and ultimately a radio show about The Beatles (Beatles Universe), which ran for over four years. When not immersed in music, Aaron enjoys spending time with the loves of his life -- his wife Andrea, and daughters Emily and Linda (all of whom have an intense love of music too).
RELATED ARTICLES
bookschicago review presseric clapton