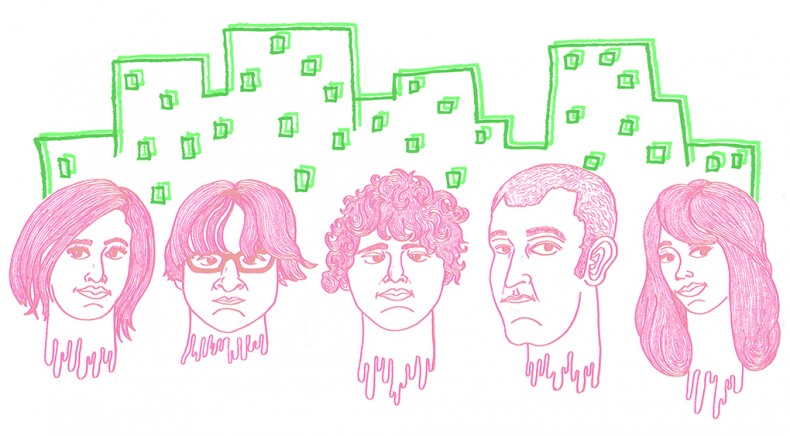 Radiation City is an American indie rock band that began in Portland, Oregon, in 2010. The band consists of Cameron Spies (guitar, vocals), Elisabeth Ellison (vocals, keyboards), Randy Bemrose (drums, vocals), Matt Rafferty (bass, vocals), and Patti King (vocals, keys, bass). There are two couples in the band. The band has released three albums: Cool Nightmare, The Hands That Take You, and Animals in the Median. The band is currently signed to the label Tender Loving Empire.

Radiation City was initially composed of Lizzy Ellison and her boyfriend Cameron Spies, adding drummer Randy Bemrose for their second show, and bassist Matt Rafferty for their third. Their debut album The Hand That Takes You was originally released in February 2011 on Ellison and Spies own cassette-only label Apes Tapes. After garnering interest through their live shows, they were picked up by the record label Tender Loving Empire and the album was re-released nationally on September 27, 2011. Time called this debut release “charmingly evocative”. After the addition of multi-instrumentalist Patti King they followed their debut up with the Cool Nightmare EP released on April 10, 2012. A music video was recorded for the song “Find it of Use” from this release. Their second full length album, Animals in the Median was released on May 21, 2013 to positive reviews.

Daniel is an illustrator/graphic designer based out of Austin Texas. He graduated from Pratt Institute with a Bachelors degree in Illustration and an Associates degree in Graphic Design.Daniel started his career in graphic design in the world of online casinos. Since then he’s worked with various clients from around the United States and Canada including but not limited to NHL, Subway, Paraco Propane, Pitney Bowes, Xerox, Conduent, Nestle Waters, The Spill Magazine, Stamford CT’s DSSD, Beechnut Baby Foods, Elizabeth Arden and much more.
RELATED ARTICLES
daniel adamsportraits