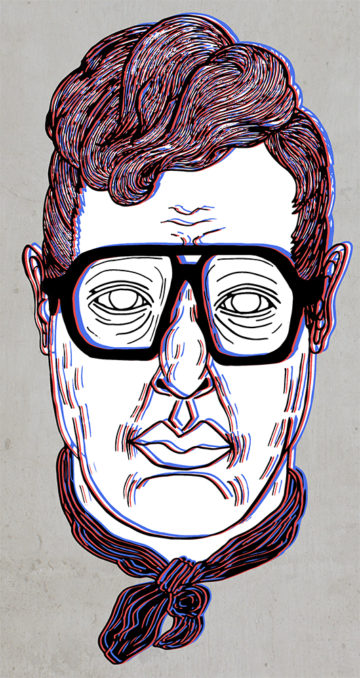 The Dears, a loose collective of Montreal-area musicians formed in 1995, are led by the charismatic Murray Lightburn. Citing Serge Gainsbourg as a major influence, the Dears combine cabaret-style vocals with a moody, intense brand of orchestral pop/rock. Lightburn’s vision for the band is to create music out of real emotions, often giving his performances the feel of a musical therapy session. Given the level of intensity that this vision can require, it’s not surprising that the Dears have endured numerous member defections, including a guitarist, a drummer, and two bass players. The Dears released their debut CD, End of a Hollywood Bedtime Story, on Grenadine Records in 2000. In early 2001, they recorded the follow-up, tentatively titled Deuxième Partie, and in 2004, the critically acclaimed full-length No Cities Left was released. Lightburn and longtime Dears keyboardist Natalia Yanchak were married the following year, and in 2006 the band released the stripped-down Gang of Losers. Missiles arrived in 2008, followed by the group’s fifth studio album, the Polaris Music Prize-nominated Degeneration Street, in 2011. In 2013 Lightburn issued a solo LP, and in 2015 the Dears returned with the first installment of a two-part album called Times Infinity, Vol. 1. The second volume arrived in July 2017.

Daniel is an illustrator/graphic designer based out of Austin Texas. He graduated from Pratt Institute with a Bachelors degree in Illustration and an Associates degree in Graphic Design. Daniel started his career in graphic design in the world of online casinos. Since then he’s worked with various clients from around the United States and Canada including but not limited to NHL, Subway, Paraco Propane, Pitney Bowes, Xerox, Conduent, Nestle Waters, The Spill Magazine, Stamford CT’s DSSD, Beechnut Baby Foods, Elizabeth Arden and much more.
RELATED ARTICLES
daniel adamsmurray lightburnportraits