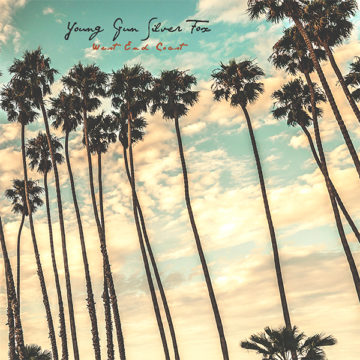 Good things come to those who wait. In 2012, Andy Platts (U.K. soul-rock band, Mamas Gun) and Shawn Lee, a multi-instrumentalist producer (AM & Shawn Lee; Shawn Lee’s Ping Pong Orchestra – “Kiss the Sky” feat. Nino Moschella) began to work on an album they had wanted to make for nearly 10 years. The result: West End Coast, a soon-to-be critically acclaimed album that pays homage to the warm, analogue So-Cal pop-rock classics of the mid-to-late 1970s. Classified as Yacht Rock, Young Gun Silver Fox have created a debut album that is a testament to the AOR Studio Sound. Hands down, West End Coast is sonic gold.

Young Gun Silver Fox is the talented UK-based duo comprised​ of Platts, a.k.a. Young Gun, and Lee, the “Silver Fox” who hails from Wichita, Kansas. Independently, Platts and Lee have over forty album credits to their names (Lee leads with about 33 albums) including work with Jeff Buckley, Kelis, Amy Winehouse, Rod Temperton, John Oates, Brian Jackson and Ben Oncle Soul.

“Tasteful, soulful and very real” are words Lee, who relocated to London, England after spending seven years in Los Angeles, uses to describe the album. “Speaking for myself, this is an album I’ve wanted to make for some time and Andy was the only person I felt I could make it with. Andy understands the classic melodic pop side as well as the soul funky side that was absolutely vital to the creation of this music. What a voice!”

Platts calls Lee a “mechanic” for his ability to take a pop song apart and put it back together. Together, Young Gun Silver Fox have created a “musician’s album”, rich with complex instrumental melodies, smooth vocals, and positive lyrics.

It’s hard to pick favourite tracks from such a solid album. As soon as I hear Lee’s smooth guitar riff in the opening track “You Can Feel It”, a smile creeps over my face and induces a fuzzy, heart-warming buzz that recalls the seemingly more simple times of yesteryear. This was actually the last song written for the album, inspired by a riff and some chords Lee texted to Platts one night.  “By the morning, Andy had written and demo’d the song ready for production,” Lee explains.

The lyrics and hook from “Better” are contagious and make you want to cruise down California’s Highway 1. The lush orchestration and wah-wah syncopation in “Long Way Back” recalls Curtis Mayfield. The harmonica riffs, horn lines, fat bass lines from “In My Pocket” evoke Hall & Oates, Prince, and Earth Wind and Fire. But Young Gun Silver Fox make the catchy synth pop licks and short electric guitar solo digestible.

West End Coast is a warm ray of sunshine on a dreary day. It soothes some of life’s harsh edges through its laid-back west coast vibe. Ironically, the album’s title references both sunny California, as well as grey West London, where the album was written and recorded at Lee’s Trans-Yank Studio.

“The most important thing is to make good music that you love and put it out into the world,” Lee, the “Silver Fox”, explains in an online video. “When your music lives out in the world, independently of you, that’s a beautiful thing.”

Many iconic musicians may have left us in 2016, but we also gained West End Coast. As we shake off troubling headlines and over-produced, digitized pop, Young Gun Silver Fox brings back cozy love songs and hopeful anthems to help us glide over the snares that life throws at us, reminding us there is hope in life’s chaotic ups and downs. Whatever your personal connection to Yacht Rock or the ‘70s, West End Coast is a much needed audio-ceutical for many. It will warm you up, open your heart, and take you back to the simple things.

Young Gun Silver Fox is wrapping up a European tour and will hopefully visit us across the pond by next summer. Live, the band includes Adrian Meehan (drums) and David Page (bass and vocals). Platts plays the Rhodes and does lead vocals while Lee plays the smooth, lead guitar.

Talia Wooldridge is an avid music lover, composer and ethnomusicologist who contributes artist interviews, live concerts, festivals and album reviews for Spill Magazine. She has written extensively on the intersection of music, personal identity and cultural symbolism with an early focus on Latin American Hip Hop and female Cuban rappers. In her spare time, Talia writes, composes music and manages Music Can Heal, a non-profit that brings live, award-winning musicians to inspire healing in hospitals, hospices and communities in need. Her next project is an interactive music-travelogue exploring music cultures and music travel around the globe. Follow her here: www.taliawooldridge.com + www.movetoyourownbeat.com.
RELATED ARTICLES
album reviewsbettermamas gun
8.0