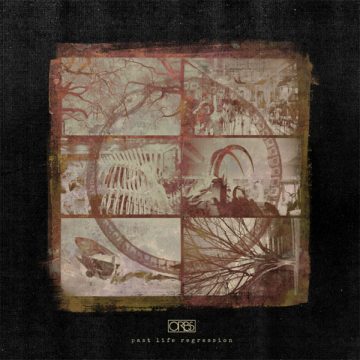 It’s been just over five years since their debut Asleep Next to Science was released but the ORBS haven’t wasted a single second. Past Life Regression, released on July 15th 2016, is entwined with life’s hardships, death and reincarnation.

After a year of touring in America, ORBS took a year and a half to evaluate the band’s direction and begun recording Past Life Regression in the summer of 2013. The band hasn’t strayed from their writing style of bizarre and vivid lyrics. It gets the message across, but the instrumentals dissuade and disorient.

Its first track, Death is Imminent (However Relative), would pull you in with its simple yet enduring guitar riffs, wondering which direction it will go in. But you’ll soon find that the vocals get lost in the instrumental at times. For the most part the song doesn’t take any change of direction, making it pretty bland for a seven-minute song. The instrumentals on this track definitely differ from the rest of the album, as they take a more progressive-rock approach. This track seems to be the odd man out, however one of the more satisfactory tracks on the album.

As soon as you jump right into Dreamland II with its quick piano scales and karaoke-sounding vocals, you’ll hear that the album completely changes its sound.

Jaws on Repeat, Life on Hold is one of the more confusing tracks, sounding more like a parody. Right after that, Peculiar, Isn’t It takes us straight into a Tim-Burton-sounding track with a very ominous and extraterrestrial sound. This is the only track on the album that I would consider to be, as the ORBS would describe themselves, space rock.

Giving Tree Hanging Me was released as a single, the more melancholic track of the album. Vocalist Adam Fisher says that his track is meant to “convey the guilt we carry when we affect someone with our selfish actions.” This haunting lullaby is definitely one of the album’s peaks.

ORBS has stayed true to their signature sound, even if that sound makes people question whether to bang their heads or to be lost in thought about life. The first track seems very misleading the rest of the album. Lyrically, the album may keep some coming back for more with its dark theme and animated words. Instrumentally and vocally, this album is definitely an acquired taste with its confusing melodic transitions.

The Spill Magazine is a Toronto-based online publication dedicated to covering the independent music scene with a strong focus on our thriving hometown talent. Our writers bring you up-to-date news, in-depth features on musicians and reviews for the latest CD releases. We also travel to the front lines for all local festivals including Canadian Music Week and North by Northeast. Don’t forget to check out our Facebook and Twitter pages for all daily Spill updates.
RELATED ARTICLES
orbspast life regression