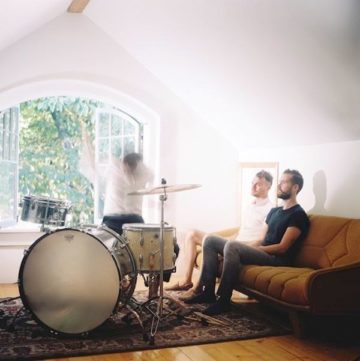 We Are The City
At Night
Light Organ Records

We Are the City’s fourth full-length album, At Night, is a fundamentally experimental album, entirely written, recorded, and self-produced in less than two weeks. This raw and unpolished creative process showcases their energy and vitality, yet some tracks are deficient.

Arising from leftover ideas from RIP, set for release in 2019, At Night could be viewed as an album intended to build hype for their next project. However, We Are the City insists that the albums should be viewed as two halves of a whole, each showcasing a different side of the band.

Having spent over two years recording RIP, At Night is a cathartic release for the band, moving away from painstakingly-recorded song structures to a looser, improvisational approach. This album also continues their love of dynamic musical ranges, from the thunderous crashes of “When I Dream, I Dream of You” to the hushed emotion of “Dark Horizon”.

Unfortunately, the rough edges sometimes detract from the overall experience. The instrumental “Delta Lab” sounds like the band recorded themselves banging away during a jam session and decided to include it. Other songs, such as “Our Spectacular and Common Lives” or “Choice Is Unlike Anything”, feel underdeveloped, putting forward musical ideas without fully seeing them through.

Ultimately, though probably the least accessible release by We Are the City, this album acts as a creative snapshot of one of Canada’s most interesting bands. We await RIP with high hopes.

Kieran Davey is a freelance writer and music enthusiast from Vancouver, Canada. He particularly enjoys alternative rock, groovy hip-hop, and basically any music from the 60's. Aside from reviewing music, he also loves playing guitar and spending time in nature.
RELATED ARTICLES
album reviewalbum reviewsat night
10