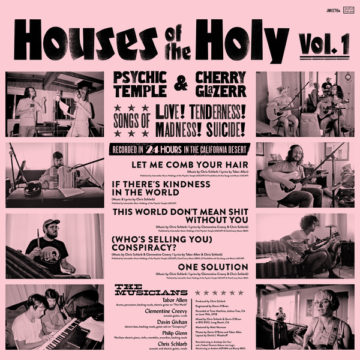 Chris Schlarb formed Psychic Temple in 2010 and since then they have released five studio albums, each one different from the last. For this EP, Houses Of The Holy, Vol. 1,  the band decided to gather together in a studio in Joshua Tree and record an album. The made the decision to  basically record live off the floor, in a 24 hour time period. The result, Houses of The Holy Vol. 1, is a five track EP that features some of Psychic Temple’s most accessible music.

Houses Of The Holy, Vol. 1 has nothing to do with the Led Zeppelin album Houses Of The Holy. It is not a cover album paying tribute to that classic rock album, but they do tip their hat in that direction in some small ways. This is not a heavy album, but it is a rock album. However,  listen to the country influenced “One Solution”, featuring Clementine Creevy on lead vocals. The song is about suicide and abruptly ends the EP. It is an example of letting the song dictate the direction, so they branch out into country/Americana. For this EP, expect the unexpected. The song also features some tasteful violin from the very talented Philip Glenn.

Although this is a band project, it is Chris Schlarb’s show. He produced the album and co-writes all the songs. That does not mean his ego gets in the way. Quite the opposite, in Schlarb’s world, this is a band project and each member of the band shines. Besides Creevy (who, aside from vocals, provides some very tasteful guitar playing) and Glenn (Wurlitzer electric piano, violin, mandolin, accordion, backing vocals), the band includes Tabor Allen (drums, backing vocals and guitar), Davin Givhan (bass, backing vocals and a nice solo on “Conspiracy”) and of course Chris Schlarb (vocals, guitars). This is a talented band that can carry off whatever style they choose to play for each respective song.

This is a strong EP full of rock, a bit of pop and everything in between. It was recorded in 24 hours and this is a benefit. This is the sound of a band working together. I only wish they had done an album, but I look forward to a Vol. 2.

Born and raised in Whitby, Aaron discovered music through his love of The Beatles. This led to a career in radio, writing for various publications, and ultimately a radio show about The Beatles (Beatles Universe), which ran for over four years. When not immersed in music, Aaron enjoys spending time with the loves of his life -- his wife Andrea, and daughters Emily and Linda (all of whom have an intense love of music too).
RELATED ARTICLES
album reviewalbum reviewscherry glazerr
8.0