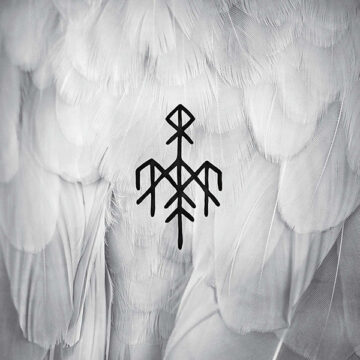 Einar Selvik is the storyteller and mastermind behind Wardruna, the Norwegian atmospheric musical group reviving ancient Nordic instruments and oral traditions for a modern audience. Their last album, Kvitravn, was released at the beginning of 2021 during the global pandemic. As oral traditions and ancient stories are best experienced live, Wardruna was unable to bring this new album to a live audience, so they did the next best thing – record selections from the album in a live studio performance as an accompanying disc. This studio performance, First Flight of the White Raven, was recorded in a single take without any editing, rerecording, or auto-tuning; a raw and emotional performance that offers a hint of what fans can expect when Wardruna are able to tour live again.

Those unfamiliar with Wardruna are in for an unexpected and transformative experience. Wardruna’s music speaks to the soul, with tones and sounds that feel like they come from the earth. The language is old Norse and speaks of legends and gods that many may see as folklore now but were alive and breathing, walking side by side the Nordic people once upon a time.

The album begins with the title track “Kvitravn” which translates to ‘white raven’ and also happens to be Selvik’s artist name. This song speaks to the esoteric and philosophic reverence Selvik has with the bird including its symbolism towards death, healing, sorcery, and unseen knowledge. Odin, the All Father in the Nordic pantheon, is accompanied by a pair of ravens, Hugin (Thought) and Munin (Memory), which fly around the world bringing him news.

The song “Grá” is about a wolf spirit, a reminder of the mutual but often strained relationship between human and animals. The subject in the lyrics is accompanied by the wolf spirit while Munin flies overhead. Wardruna integrates old instruments into their music such as the goat-horn, Kravik-lyre, and the taglharpa which can be heard throughout the album.

A standout addition to First Flight of the White Raven is their inclusion of the track “Helvegen” that was originally released in 2013. What is easily one of their most recognizable songs, this haunting piece incorporates a prayer for a dying man.

Luckily, as Flight of the White Raven was released to offer fans a taste of a live show when live shows weren’t possible, that has changed and Wardruna will be touring again this year. If this live album is any indication, their live show will be an experience that is well worth the wait.

Samantha is both a writer and a fan of the arts and has been able to find numerous ways to pair the two. Eager to dive head first into writing for Spill, Samantha is an avid partaker and reviewer of live art in Toronto serving as an editor at Mooney on Theatre exploring live local theatre, she's a photojournalist for Go Globehopper, a travel, dining and tourism blog that focuses on Toronto and abroad and previously for Lithium Magazine. She's passionate about music, theatre, photography, and writing -- not necessarily in that order. She drinks tea more than coffee, prefers ciders over beers, and sings karaoke way too loudly. You can follow her on various social media including Facebook, Twitter, and Instagram.
RELATED ARTICLES
album reviewalbum reviewsbynorse
9.0