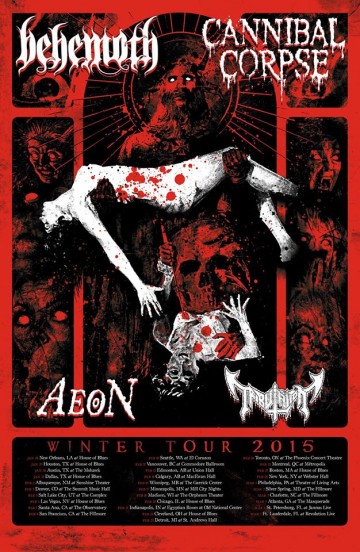 Sweaty bodies and by a barrage of death metal ripping through the venue’s PA system greeted fans upon setting foot into the jam-packed Phoenix Concert Theatre on the evening of Feb. 24, 2015.

Aeon was playing at approximately 220bmp with more double bass drum hits than you could fit into the US financial defect. Headbanging, elbows-to-the-face, ear-crushing music and flying hair was the order of the night, and everyone loved it. Aeon looked and sounded like they spend 10 hours a day at the death metal gym –they never missed a note in their blisteringly fast setlist and they kept the joint shredding in preparation of the mammoth acts to follow.

Behemoth’s setup was impressive. Between acts the roadies brought out stage props like satanic wrought iron mic stands with pentacles and pentagrams on them, and at centre stage there was a demonic-looking candle holder with three ceremonial candles that burned for the whole set. Lead singer Adam Darski is ALL BUSINESS when it comes to the stage show. With white face paint and an unsettling hoodie covering half of his head, he gave out an aura of evil while sounding like Satan himself. Behemoth seamlessly ripped through each of their songs from various albums over their 20-year career; the band was in top form and each song sounded as tight as their recordings. For the last song, the band changed outfits and wore horned cloaks and played slow doomy music, leaving the crowd wondering if they would forever be possessed by the demon that is Behemoth.

The bulk of the crowd came down to this show for Cannibal Corpse and this was obvious during their setup; no one in the crowd could move as everyone stared intently at the stage while the roadies set everything up. There was a full drum kit change, a HUGE backdrop with the band’s logo on it and MAJOR anticipation for this year’s heaviest band and craziest mosh pit. During the band’s set, someone threw a can of beer on the stage and lead singer George “Corpsegrinder” Fisher picked it up after the song and said. “Whoever threw this up on the stage is lucky I didn’t see your face, because if I did, I’d come down there and RIP YOUR FUCKING FACE OFF in front of your girlfriend!” It was truly awesome and the crowd went insane! The songs “Kill or Become,” “Addicted to Vaginal Skin,” and “Hammer Smashed Face” were the highlights of the set. The place went absolutely ape-shit during these tunes; it’s a wonder people didn’t end up exiting on a stretcher. During “Hammer Smashed Face,” Corpsegrinder told the crowd that the mosh pit must take over the entire club, at which point it expanded to about four times its original size. It was pure madness. This concert was one for the Toronto metal history books; I’ll be at the next one for sure.

Andre has been writing for The Spill Magazine for over 12 years, dating back to the print days. His passion for music goes far beyond writing reviews for new music and live concerts, he is also an active musician and producer on the Canadian music scene. Having toured North America and Europe with various acts, he is no stranger to dedication and work ethic new bands must endure to make the grade in today's market; Andre always delivers perspective writing that is authentic and to the point. Mr. Skinner typically covers indie rock, grass roots, electronica and is our resident hard rock and heavy metal specialist. He is extremely selective on what bands he covers for articles and you can rest assured they are ALWAYS band to watch with something left of centre to offer.
RELATED ARTICLES
behemoththe phoenixtoronto