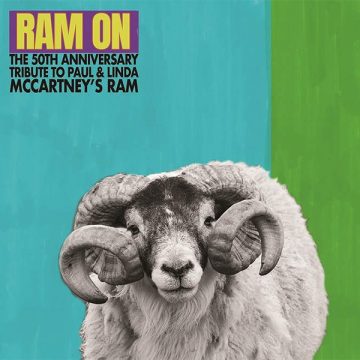 Full disclosure…I think Ram is one of the greatest albums of all time. Period. It has taken 50 years for critics to come around (it was savaged by the press upon its release in 1971), but it is now receiving the recognition it so rightly deserves. McCartney, himself, is releasing a half-speed master vinyl pressing of the original album. To pay tribute to the album, Denny Seiwell (who played drums on the original album) and producer/multi-instrumentalist Fernando Perdomo have brought us RAM ON. For the project, Seiwell and Perdomo have put together a solid backing band, which features guitarist  David Spinozza (who like Seiwell played on the original Ram album), Marvin Stamm (who played flugelhorn on “Uncle Albert/Admiral Halsey”), Davey Johnstone(Elton John Band) and Will Lee (The Fab Faux).

Reportedly the producers and artists had McCartney’s blessing for the album, which is no surprise as McCartney is releasing McCartney III Imagined (a remix/re-recording of his most recent album McCartney III) later this summer (it has already been released to streaming services, but physical copies come out in July). McCartney has always enjoyed other artists covering his songs. And with RAM ON, I have no doubt he is very happy.

For the most part, the artists stick very close to the originals, which is fine. These songs have not dated and sound every bit as good today as they did 50 years ago. The production throughout is crisp and energetic. The album sounds great. The musicians provide a solid backing for very talented singers to do their own interpretation.

Bebopalula has the incredibly difficult task of covering “Uncle Albert/Admiral Halsey”, but they rise to the occasion and seem to be having fun with the song. Stamm provides his trademark flugelhorn for the song and it sounds fantastic. Carnie Wilson, and husband Rob Bonfiglio do a great job with “Long Haired Lady” and is the perfect song for the duo who, in many ways, replicate Paul and Linda’s stunning original version. Timmy Sean totally rocks out with the quirky and fascinating “Monkberry Moon Delight”, while The Dirty Diamond and Durga McBroom make “3 Legs” their own, bringing out the grit of the song. Dead Rock West take  “Heart Of The Country” and transform it from the lovely folk/pop song into a cross between garage rock and pop. And it works.

In addition to the entire Ram album, the tribute also contains covers of “Another Day” and “Oh Woman, Oh Why”, which were recorded during the Ram sessions, but released as a single prior to Ram. They are also welcome additions.

RAM ON is a great tribute album. The covers are excellent and bring out everything that is unique and wonderful about Ram. Perhaps some of the artists could have been a bit more experimental with the songs, but this is a small criticism. RAM ON is a great way to remember the classic album and get our appetites up for the half speed master waiting in the wings.