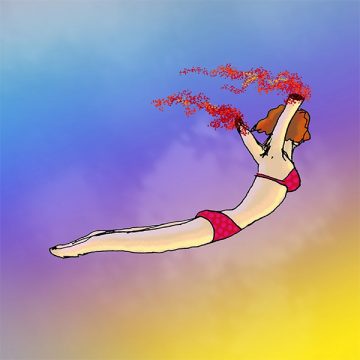 Juliana Hatfield’s storied career rolls on with her latest release, Blood to a thirsty new-gen audience and longtime followers. This impeccable release is LOADED with catchy twists, turns and miles of instrumental layers keeping the music fresh. On this trip, Juliana doesn’t shy away from getting heavy as she brings copious amounts of distorted guitars and hard-hitting drums that come off (at times) as straight up hard rock!

Keeping the release nice and tidy at 10 songs, it’s an easy album to sit through and take in front to back, then throw on repeat. From the heavy fuzzed out “The Sham of Love” to the simple and danceable “Splinter”, this release has an approachable sound for a wide audience. As for lyrical content, the subject matter gets rather dark along the way and with some exploring you’ll see why!

Standout songs include “The Shame of Love”; an instant classic that could be described as sounding like Sheryl Crow goes heavy. The song’s HUGE drums, GIGANTIC guitars and stylized synths give it life, going from soft to heavy and back again. “Suck it Up” sits in the top three for best tracks with its dance floor groove and exceptional writing. There are guitar riffs for days and the song even features an ‘80s style guitar solo.  “Had a Dream” jumps right out of the pile with its homicidal lyrical content, delivering lines such as “I stuck the knife into your neck, I pulled it out and stabbed you again” and takes the audience into an episode of True Crime, keeping fans as engaged with the story as the addictive high octane track. If you’re feeling ‘90s indie, the comfort zone is delivered in spades with the track “Mouthful Of Blood”, a lo-fi upbeat tune with soft vocals and a simple backing track of drums, bass, guitar, and keys. This lead single is LOADED with hooks and might dangerously get stuck in your head.

If you’re in the mood for some raw emotional heavy-hitting indie rock, Blood will take care of all such cravings. Although the album’s lyrical content is heavy on dark themes, the music is uplifting and fresh. Juliana Hatfield has a runaway indie classic. This is a vinyl must!

Andre has been writing for The Spill Magazine for over 12 years, dating back to the print days. His passion for music goes far beyond writing reviews for new music and live concerts, he is also an active musician and producer on the Canadian music scene. Having toured North America and Europe with various acts, he is no stranger to dedication and work ethic new bands must endure to make the grade in today's market; Andre always delivers perspective writing that is authentic and to the point. Mr. Skinner typically covers indie rock, grass roots, electronica and is our resident hard rock and heavy metal specialist. He is extremely selective on what bands he covers for articles and you can rest assured they are ALWAYS band to watch with something left of centre to offer.
RELATED ARTICLES
album reviewalbum reviewsamerican laundromat records
8.0