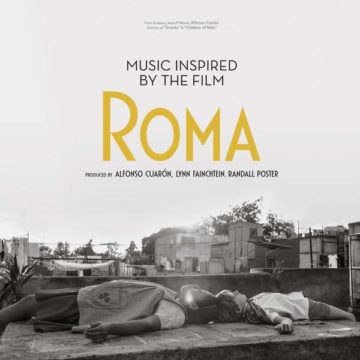 Alfonso Cuarón’s legacy as a genius of cinematic storytelling will live on for ages, and his latest film, Roma, is now accompanied by Music Inspired by the Film Roma, a compilation of songs which includes compositions by a variety of artists including Beck, Billie Eilish, Patti Smith, and Jessie Reyez. Each contributing artist draws from his or her personal interpretation of the film and the results reflect Roma’s rawness and emotionality.

Music Inspired by the Film Roma opens with an audio clip by an artist called “Ciudad de Mexico” which, as the writer’s name suggests, serves as a Mexico City soundscape. It is followed by Patti Smith’s spirited reinvention of “Wing”. Using an array of genres including orchestral, pop, Latin, and electronica to explore Roma’s depth, the album gradually increases its tone and tempo, before eventually returning to somber qualities and grounded messages.

Each track is melodic and mesmerizing, capturing its own unique perspective on the film in a captivating way, but when all the songs are played back-to-back, the compilation feels a bit unorthodox, as it bounces from Eilish’s poppy and moody “When I Was Older” to the classical Spanish of Reyez’s “Con El Viento”. The artists remain true to themselves and their sounds, but the album’s narrative isn’t entirely fluid, which may take a listener out of the trance-like state imparted by its source material.

Nonetheless, Music Inspired by the Film Roma is a grandiose album, filled with well-orchestrated blends of personality and quality performances.

Joseph Dominguez resides in a small-town from Southern California. In 2018, he received a Bachelor’s Degree in psychology from San Diego State University. Here is where he broadened his love for music and writing. He took these strengthened bonds back to his hometown, where he plays drums in a band, writes music journalism and fiction, and exercises his love for pop culture.
RELATED ARTICLES
album reviewalbum reviewsbillie eilish
8.0