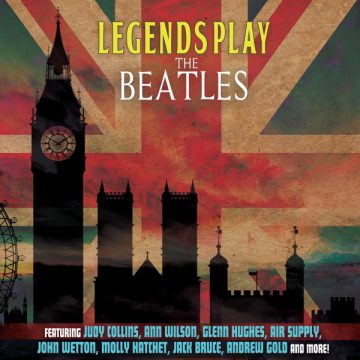 Since The Beatles exploded on the scene in 1964, there have been tribute albums in many different genres. Chet Atkins, Count Basie, The Hollyridge Strings and so many more have taken their turn at recording Beatles songs. Some albums have been extremely good, as was All This And World War II, while some were best left on the shelf including Sgt Pepper’s Lonely Hearts Club Band Soundtrack featuring The Bee Gees and Peter Frampton. Legends Play The Beatles is the latest in that long line of Beatle tributes, and it is pretty good.

The main problem with covering The Beatles is that artists will either be criticized for following too closely to the original or straying too far from it. It really is a lose/lose situation. Usually, if the songs are recorded for specific reasons, such as a soundtrack, songs can be altered to fit the film. But usually, covering The Beatles is a tricky proposition.

On Legends Play The Beatles, the artists stick pretty close to the originals, with a few brave souls straying from them. Unlike other tributes, there is no rhyme or reason to this, just a collection of new and established artists contributing Beatle covers. This album features a number of artists, such as Jack Bruce, John Wetton, Ann Wilson, Howard Jones, Judy Collins, Molly Hatchet, Electric Moon, Sugar Candy Mountain.

Some have been released before, as was Howard Jones’s cover of “And I Love Her”, and some are exclusive to this collection as is John Wetton’s cover of “Penny Lane”. For the most part the covers are fine, with a few standouts, such as Sugar Candy Mountain’s trippy version of “Rain”, and Electric Moon’s drone-like version of “Tomorrow Never Knows” featuring amazing vocals. Richard Page and Steve Morse begin the album strongly with their cover of “Here Comes The Sun”. Ann Wilson’s interesting rendition of “Across The Universe” is also very good and worth noting.

Other cover versions do not work so well, such as Air Supply’s too laid-back version of “The Long And Winding Road” and Deep Purple’s Glenn Hughes uninspired version of “Let It Be”.

Hughes has a great voice but it just doesn’t seem to work for this version. Judy Collins also tries to put her own spin on “Yesterday”, complete with piano instead of guitar, but, as with Hughes, she seems to be missing something with her version.

None of the versions are bad, but when listening to the album you may find yourself wondering ‘why am I not listening to the originals’. As a curiosity, the album is fine, but I doubt it would sustain repeated spins on the turntable. But, fans of some of the artist such as Molly Hatchet or Andrew Gold may enjoy their interpretation of a Beatles’ classic. Beatles fans may not enjoy these adaptations, but then again, it is always interesting to hear how artists perform these songs.

The title is quite accurate, as for the most part, the artists collected here are legends. But unlike the recent Ram On album, which Paul McCartney endorsed, The Beatles have not given their blessing to this release. Again, that does not take away from the album, but does make the album feel like it is a bit of a cash-in on the attention The Beatles are receiving in 2021, especially with the upcoming rerelease of Let It Be. Overall, a pretty good compilation.

Born and raised in Whitby, Aaron discovered music through his love of The Beatles. This led to a career in radio, writing for various publications, and ultimately a radio show about The Beatles (Beatles Universe), which ran for over four years. When not immersed in music, Aaron enjoys spending time with the loves of his life -- his wife Andrea, and daughters Emily and Linda (all of whom have an intense love of music too).
RELATED ARTICLES
air supplyalbum reviewalbum reviews