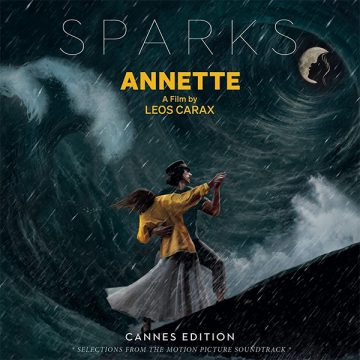 Sparks have been very busy of late. In 2020 they released A Steady Drip, Drip, Drip, which was followed by a very interesting documentary directed by Edgar Wright about the Mael brothers. Now, in 2021, they have released a soundtrack for the musical Annette. This is not an official follow-up to last year’s album, but it does contain new music written by and performed by Sparks. As far as I am concerned, this is a reason to celebrate.

Ron and Russell Mael have been releasing records under the Sparks banner since 1972, and as this album demonstrates, they are in no way slowing down or lacking inspiration and originality. They have always pushed the boundaries of what is pop or rock , and given they have been tasked to write a musical, there was no reason to suspect that this would be a conventional soundtrack.

Sparks opens the album with the wonderful “So May We Start” which builds to include principal cast members Adam Driver, Marion Cotillard, and Simon Helberg. It is the perfect opening track which allows all concerned to present some foreshadowing of what is to come, at least in the plot. It paves the way for the musical to begin. Having not seen the film, it is difficult to assess how the songs are used in the actual movie, however, as a standalone soundtrack, they work quite well and fit together very nicely.

The songs, even those not featuring Sparks in the forefront, sound like Sparks tracks. Even when Adam Driver and Marion Cotillard sing the beautiful “We Love Each Other So Much”, it is not difficult to picture Russell Mael singing here. It is a lovely number with sweeping orchestration. And who knew Adam Driver could sing?

“She’s Out Of This World” opens with “breathe out, breathe in” repeated in mantra-like style with Mael’s incredible vocals. While “You Used To Laugh” featuring Driver is pure Sparks humour mixed with incredible unease. Finally, “True Love Always Finds A Way” features one of the most beautiful tunes Sparks have ever created. It starts sparse with layered vocals and continues to build, an effect which is quite astounding.

As a musical, this is one that I probably could sit through. The music takes twists and turns and is full of melody, whimsy and incredible arrangements. Sparks have never sounded better, and a great deal of credit must be given to the cast, who rise to the challenge of adding their vocals here. Annette (Cannes Edition – Selections From The Original Motion Picture Soundtrack) may not be the official follow-up to A Steady Drip, Drip, Drip, but it is a fine collection by a band who has carved out its own distinct genre.

Born and raised in Whitby, Aaron discovered music through his love of The Beatles. This led to a career in radio, writing for various publications, and ultimately a radio show about The Beatles (Beatles Universe), which ran for over four years. When not immersed in music, Aaron enjoys spending time with the loves of his life -- his wife Andrea, and daughters Emily and Linda (all of whom have an intense love of music too).
RELATED ARTICLES
album reviewalbum reviewsmilan records
8.0