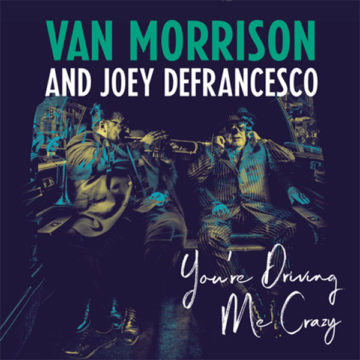 Van Morrison fans are having a good year. You’re Driving me Crazy is Van Morrison’s third album since September, 2017. Quite a remarkable feat by anyone’s standards. Joining him on You’re Driving me Crazy is Joey DeFrancesco, who is well known in the jazz world as an organist, vocalist and trumpeter. DeFrancesco’s band backs the two of them up throughout the album. His band includes  Dan Wilson (guitar), Michael Ode (drums) and Troy Roberts (tenor saxophone).

This has been the most prolific time for Morrison. Although he is recording a great deal, like Bob Dylan, he is not writing many new songs. Once again, fans need to know that there are really no new songs in this collection. He goes for the standards, and has reworked of some of his older ones. Morrison and DeFrancesco attempt to take his songs and fit them into a blues band style. Sometimes it works, such as “Close Enough For Jazz” (Too Long In Exile, 1993), but for the most part his songs do not lend themselves to this form of interpretation. “Have I Told You Lately That I Love You” ( Avalon Sunset, 1989) is sped up and loses everything that made that song so loved. The clear highlight of the album is “Celtic Swing” (Inarticulate Speech Of The Heart, 1983).

Where the album does excel is when Morrison, along with DeFrancesco tackle the old standards. At these points, the album soars and is quite good. “Sticks and Stones” is a great example of everything working together. But even with the standards, there are some misfires, most notable is Cole Porter’s “Miss Otis Regrets”, which kicks off the album. The humour and style of the original is lost, mainly due to Morrison’s vocals.

The album is a good new and bad news kind of situation. Morrison has never sounded better, but not all the songs fit his voice. The back-up band is stellar, especially DeFrancesco, who adds some of the finest Hammond organ playing I have heard in the last decade. The bad news is that the album is very uneven, and it does not hit the mark. Of the three albums Morrison has released in the last seven months, this is the weakest. The only thing that saves the album from being a complete mess is the Joey DeFrancesco and his band. DeFrancesco steals the show right from Morrison, and maybe that was Morrison’s intention all along.

Born and raised in Whitby, Aaron discovered music through his love of The Beatles. This led to a career in radio, writing for various publications, and ultimately a radio show about The Beatles (Beatles Universe), which ran for over four years. When not immersed in music, Aaron enjoys spending time with the loves of his life -- his wife Andrea, and daughters Emily and Linda (all of whom have an intense love of music too).
RELATED ARTICLES
album reviewslegacy recordingssony music
9.0