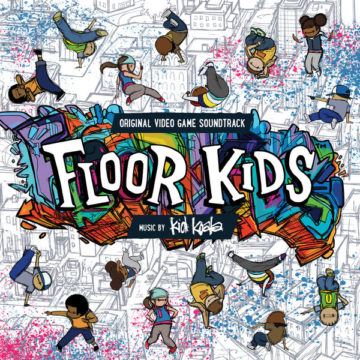 It is no surprise, given his hard-to-contain talent and countless sources of artistic inspiration, that Eric San (aka Kid Koala) would get involved in the creation of a video game based around breakdancing. Not only do his specific abilities as a ground-breaking scratch DJ push him in this direction, but also his aforementioned creative nous; San is an artistic omnivore seemingly capable of immersing himself in any endeavour and doing so with commitment. Floor Kids is no different in this regard – San is a natural fit and his ability to pair samples and scratching with virtual break battling is flawless. This album may not make for end-to-end to listening, but it has an energy and optimism that propels the listener forward as effortlessly as it does the virtual dancers in the cipher.

The narrative arc of Floor Kids focuses on a young break dancer who has to learn their craft, hone their skills, and immerse themselves in the culture of break-battles as a means of progressing. Thus, the soundtrack follows a similar format – songs are generally short, lasting one to two minutes only, but with an unavoidable tempo and movement. There is a definite feel of growth as the album progresses and though there is a distinct feel that these are songs with listening as their secondary function, the listening experience is no less interesting. Need some new tunes for the gym? You’ll even get a 4-3-2-1 countdown before many of the tracks. Need something to get you up and moving in the morning? Look no further than 60-120 seconds of intensity and groove in a tightly contained track. Searching out some up-tempo break beats for your dance class, or just for your pre-bar social hour? Here it is. In short, this is an album that works so well because it can so easily fit into countless frameworks; it is unquestionably successful as a video game soundtrack, but like San and his chameleon-like artistic talent, it also works in so many other fields.

Energy, authenticity, and vision are all hallmarks of Kid Koala’s past work, and Floor Kids is no different. The Floor Kids game is available now on Nintendo Switch.

Br. lives in southern Ontario, grew up on The Beatles and The Journeymen, spent his adolescence immersed in grunge, and his adulthood in British alternative. His greatest joy is seeing his son dance and grow into his own appreciation of the indescribable joy of music...
RELATED ARTICLES
album reviewsarts & craftsbig trouble in little battle
8.0