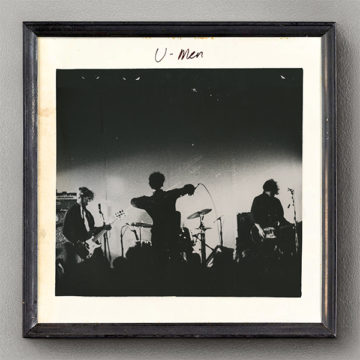 For true fans of the Seattle Underground, this album is long overdue. The U-Men were a band unlike any other on the infamous scene that was home to the likes of Soundgarden, Mother Love Bone, Pearl Jam, Mad Season and more. Called the “undisputed kings of the Seattle Underground” by Mark Arm (Mudhoney, Green River), The U-Men were electric forces to be reckoned with in the 80s.

Despite officially breaking up in ’89, the U-Men have gone down in grunge-rock history. This album is a complete catalogue of the band’s work completely remastered plus an additional five unreleased tracks. Put out by Sub-Pop records, nostalgia is the name of the game.

Kicking off the record is “Blight”, a spooky number with a surf bass line and low, raspy vocals. Fairly minimalistic and slightly humorous in its approach, it’s easy to imagine a group of teens banging their heads to the track in a garage or basement.  The songs all slam from one to the next without much in the way of interludes or connections.  The album thrashes through track after track for one long symphony of gritty, no fucks given sound.

Another solid track to watch out for is “Pay the Bubba”.  With thumping drums, distorted guitar all over the place and those classic U-Men vocals, this song sounds like one hyped up, balls to the wall version of a Cramps song.  From there, the band takes a turn for the simpler punk rock style tune- “Freezebomb.” It rocks hard, short and tight.

This catalogue release from the U-Men is an exciting addition for grunge lovers.  Long overdue, it’s homage to one of rock’s most pivotal bands and most pivotal scenes.  No matter how you listen, chances are you’ll dance.

Gabrielle Mueller is a lover of all things music, writing and charcuterie boards. Gabrielle has a particular passion for music of the 1960s and the hippie movement in Toronto’s Yorkville district. Gabrielle runs her own music website, The Hippie Historian, where she reviews concerts, interviews musicians and writes about music history that spans the ages.
RELATED ARTICLES
album reviewssub pop records
9.0