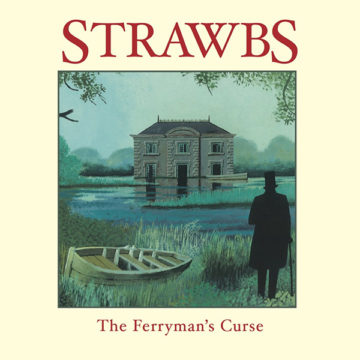 The Ferryman’s Curse is the first studio album by The Strawbs since 2014’s Prognostic. For the past three years, fans have been waiting for a new studio album, and not only has the wait been worth it, The Strawbs have exceeded all expectations. Quite frankly, this is one of their best albums, ever. The loyal knew they had it in them, and the proof is in this remarkable album.

For this album, the lineup of The Strawbs is their touring band for the past couple of years. Original member Dave Cousins is joined by long standing members Dave Lambert (guitar and vocals) and Chas Cronk (bass/guitar/vocals). Joining the new incarnation are Dave Bainbridge (keyboards) and Tony Fernandez. For the record, Cousins’ voice is in fine form. As good as ever, deeper perhaps, but he sounds fantastic.

For this album Cousins cowrites with every member, as well as writing his own solo songs. He has gone back to what The Strawbs do best– strong melodies, brilliant instrumentation and stunning lyrics. Lambert contributes terrific songs too. The bottom line is that this is a band, not Cousins with a backing band. This is a tight, well oiled band. The years of touring and playing has allowed them to recreate their own sound and produce prog rock like songs. Listen to Bainbridge’s organ solo in “The Nails From The Hands of Christ”. What makes it so great is that he knows when to cut it and go back to the song. A true talent.

Lyrically, this album has a religious overtone, which is nothing new from The Strawbs. Cousins is not forcing his vision of spirituality on the listener, but rather, these are stories with religious overtures. “The Nails From The Hands Of Christ” reminds me, title wise, of one of their early songs “The Man Who Called Himself Jesus”. Both songs are slightly cynical, but “The Nails From The Hands Of Christ” incorporates technology and youth’s understanding of religion.

“The nails were bent and rusty,
As if to make a point.
She looked them up on Google,
And then she rolled a joint.”

Cousins does not pass judgement, he merely tells the story.

There are other references to religion — “The Ten Commandments” and ”The Song of Infinite Sadness”.  Cousins is grappling with mortality throughout the whole album, not your standard pop fare, but it works, musically and lyrically. If you need any more evidence, listen to the last song on the album, “We Have The Power”. Cousins starts the song off counting blessings but ends with

“Ours is but a short life,
From the moment of our birth,
When our ashes scatter,
To the corners of the earth.”

An interesting and somewhat thought provoking ending. He also name checks an older Strawbs song, “Autumn”, which makes it all the more special.

The Strawbs have been around a long time. Their first album was released in 1968. That is almost 50 years, and as with any band with that kind of history, has their ups and downs. But here they have delivered one of their best albums, and one of the best albums of this year.

Here's what we think...
Spill Rating
Fan Rating
Rate Here
New Criteria
10
67.4
10
Total Spill Rating
67.4
Total Fan Rating
11 ratings
You have rated this
Album Reviews
album reviewscherry recordsstrawbsthe ferryman's cursethe nails from the hands of christwe have the powerwitchwood
album reviews, cherry records, strawbs, the ferryman's curse, the nails from the hands of christ, we have the power, witchwood
About the Author
Aaron Badgley

Born and raised in Whitby, Aaron discovered music through his love of The Beatles. This led to a career in radio, writing for various publications, and ultimately a radio show about The Beatles (Beatles Universe), which ran for over four years. When not immersed in music, Aaron enjoys spending time with the loves of his life -- his wife Andrea, and daughters Emily and Linda (all of whom have an intense love of music too).
RELATED ARTICLES
album reviewscherry recordsstrawbs
8.0